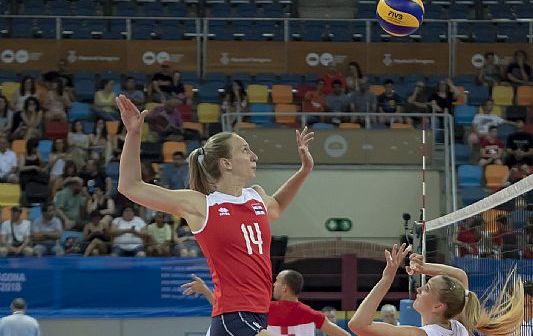 Current Italian champions Conegliano decided to play it safe with Raphaela Folie‘s injury and announced in its official website the signing of Martina Samadan to fill up her roster spot. The 25-years-old 6’4″ Croatian national teamer middle blocker, who is transferring out her home-country’s HAOK Mladost Zagreb, is already known to Conegliano’s coach, Daniele Santarelli, as both were present in Croatia’s recent successful run for a berth at the 2019 EuroVolley.

“I’m very happy to have the opportunity to play for such an important Italian club and such an extraordinary technical staff. Knowing the coach, with whom I had a great time this summer, is certainly important and will certainly help me during the season. I got to know his training system and his idea of ​​the game and I found myself very well. Samanta Fabris who will help me to join the group, I am very motivated for this new experience. I think the Italian championship is one of the best leagues in the world and Imoco is one of the best clubs, it will be a great honor and a great commitment to wear this jersey. I hope to help the team as much as possible every day and I’m really excited to start this chapter of my career, where I know I will learn a lot and grow up as both a player and a person. “

Virginia started her NCAA college career with one season at Virginia Commonwealth University, where she set school records in total blocks (172), blocks per set (1.67), and hitting percentage (.349), being named the AVCA Northeast Region Freshman of the Year and Atlantic-10 Rookie of the Year. She then transferred to Seattle University for her last three years of eligibility, finishing her career with 1000+ kills and as a 2x All-Wac First Team Selection.