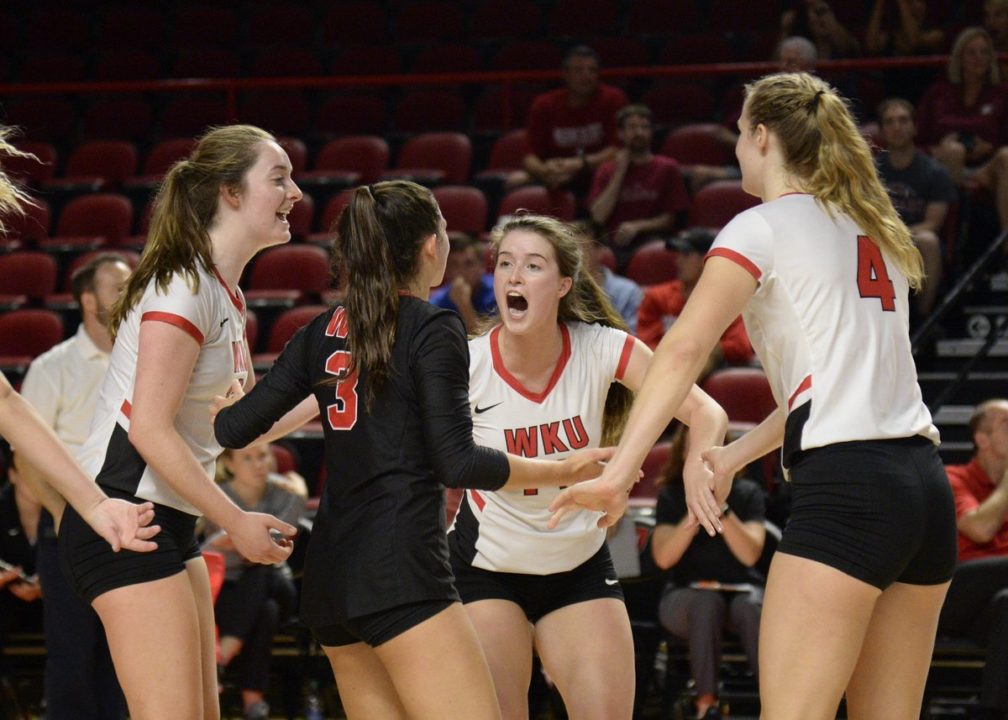 BIRMINGHAM, Ala. – Four Lady Toppers finished with double-digit kills as WKU Volleyball spoiled UAB’s Senior Night with a four-set win Thursday evening in Birmingham. Rachel Anderson led the way with 15 strikes while Lauren Matthews (14), Kayland Jackson (11) and Sophia Cerino (10) all reached double figures as well. The Red and White have now matched their season-best five-match win streak after the 25-22, 20-25, 25-18, 25-21 decision.

“I’m very proud of our kids tonight,” head coach Travis Hudson opened. “It’s very difficult to win on an opponent’s Senior Day on the road. We started the match pretty rough but improved as play continued.”

WKU climbed to 19-9 with the victory and now sits in a four-way tie for second place with a 10-3 reading in Conference USA tilts. UAB drops to 13-15 with the loss with a 5-9 mark in league play.

After UAB registered the opening point of the match, WKU posted a 6-1 run to open a lead it would own for much of the set. Trailing 8-3, the Blazers called for an early stop and responded out of the break with a 4-0 run to pull within one. The hosts managed to knot the frame at 18-18 and led by as many as three points down the stretch at 22-19, but the Lady Toppers closed the frame on a 6-0 run to grab a 1-0 lead in the match.

Both sides battled back and forth through much of the second frame. After the Lady Toppers went up 10-9, UAB pieced together a 5-1 run to take a lead it would not relinquish. UAB worked at a .345 offense clip to claim a 25-20 second-set decision to even the contest at 1-1.

Tied up at 6-6 following the intermission, WKU strung together three-consecutive points to take a 9-6 and never looked back. UAB pulled within three at 18-15 before the Lady Toppers went on a 4-0 run and ultimately claimed the set 25-18. WKU used an efficient .455 offensive rate – including 17 kills – to take a 2-1 lead over UAB. Jackson struck four times while Matthews led the way with five kills.

Set four from Bartow Arena saw nine ties throughout its course but just one lead change that favored the Red and White. UAB had never trailed to the 9-9 juncture before WKU earned back-to-back points to take the lead. From there, the Blazers were able to even things up three more times but never regained the lead as WKU went on to win a 25-21 decision to claim the match. Anderson racked up seven kills in the set while Payton Frederick tallied nine digs in the frame.

Taylor Bebout opened the match at the setter position but Mary Martin took over midway through the first set and never looked back. The senior facilitator finished with 41 assists as her teammates found the floor for a kill on 46.6 percent of her sets.

Frederick tallied a match-high 18 digs on the night. The freshman now owns seven outings with 18 or more digs across her debut campaign.

Hallie Shelton reached double-digits in the dig column as well, racking up 12 on the night.

WKU operated at a .278 clip on the attack across the match while holding UAB to a .196 rate. While UAB tallied two more kills than the Lady Toppers (55-53), WKU owned 11 fewer errors on 10 less attacks.

With just one regular-season match remaining, WKU Volleyball is headed to Louisiana Tech looking to spoil its second Senior Day ceremony of its current road trip. First serve from Ruston, La., on Saturday is slated for noon CT.