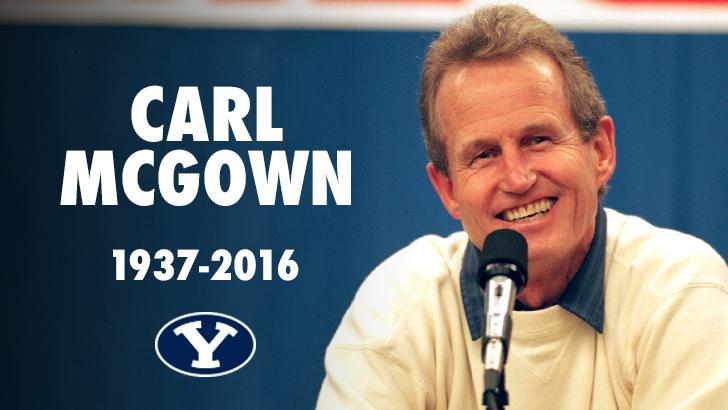 After the death last week of legendary volleyball coach Carl McGown, his son Chris has shared details about the coach’s... Current Photo via BYU Athletics

After the death last week of legendary volleyball coach Carl McGown, his son Chris has shared details about the coach’s cause of death as well as funeral arrangements.

The 79-year old McGown suffered from a stroke on the left side of his brain last Tuesday, and after an attempt at surgery, the family opted to remove him from life support on Friday.

A wake and viewing will be held on Wednesday, January 4th, with a memorial service on Thursday, January 5th. In lieu of flowers, the family has asked for donations to the BYU Men’s Volleyball program.

The full details, from his son Chris, are below:

We’ve been overwhelmed by the love and support that we’ve felt from all the friends and family around the world. Thanks so much for thinking of my dad, my mom, and our family.

My dad had a significant hemorrhage (stroke) on the left side of his brain around 8am on Tuesday morning. My mom found him, called my brother, and the paramedics arrived quickly and got him to the hospital. He lost consciousness en route, and the prognosis from the ER staff was that a favorable outcome was unlikely, as the CT scan showed significant bleeding, damage, and displacement of his brain in both speech, cognition, and right side motor centers.

We opted for surgical intervention, with the hopes that a miracle might occur. We were very clear with the staff that we only way we wanted to proceed was if there was a high likelihood of a strong recovery. A life of incapacitation or severe disability wasn’t one that my dad would have wanted, nor did we want that for my mom. The surgery to relieve the pressure was successful, but my dad never regained consciousness.

We struggled over the following days to balance hope of a miracle with the reality we faced, and given our options and my dad’s worsening condition, we chose to remove life support yesterday. He was a fighter to the end, but the hospital staff did a world class job of easing him out peacefully and painlessly.

We shared a wonderful Christmas day with him as a family, and then another great day with him on the 26th, my mom’s birthday. We look back on those two days as divine gifts. While the days he spent in the hospital were tough on us, they also afforded so many of his friends to tell him good bye and hug and kiss him while he was still alive. All told, it wasn’t a bad way to go, it was just far too soon.

Many of you have asked about funeral services:

My mom has asked that in lieu of flowers, that donations be made to:
BYU Men’s Volleyball
235 SFH
Provo, UT 84602