Galatasaray’s Koshleva Goes Down With Injury In Champions League Match 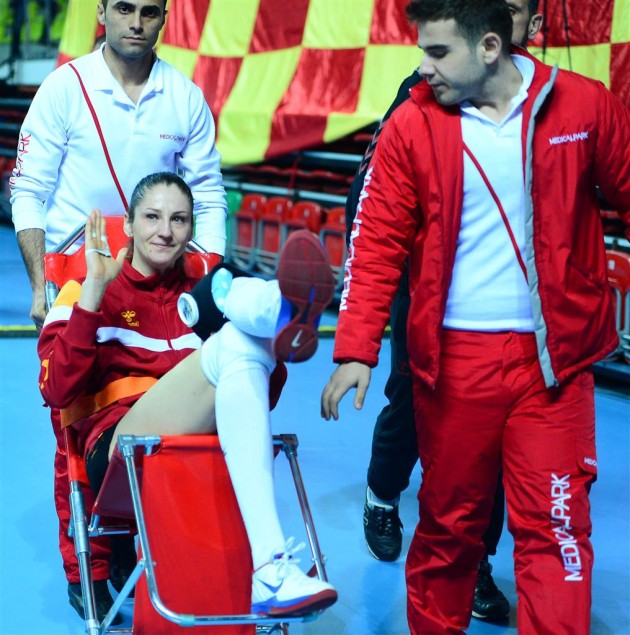 In the opening leg of the 2018 CEV Women's Champions League, Galatasaray was hit with an injury to Tatiana Koshleva in the second set of the match.  Current Photo via CEV

In the opening leg of the 2018 CEV Women’s Champions League, Galatasaray SK Istanbul was hit with an injury to Tatiana Koshleva in the second set of the match.

Up until her injury took her out of the game, Koshleva was the Turkish team’s leading scorer with 4 in the first set and 3 in the second. It is uncertain the extremity of her injury but she was wheeled off the court and was reportedly having knee problems, according to the CEV.

In the competition, Koshleva has been Galatasaray’s second-leading scorer with 109 total points in the competition behind Neslihan Demir Guler’s 110 points.  In the fourth round of the competition, the team went 4-2  in Pool D, which was enough to get them to the Playoffs 6 as one of the top-two second place teams to advance.

With Koshleva out of the match, Galatasaray was unable to take the victory over Igor Gorgonzola Novara, losing in five sets 3-2, (25-21, 7-25, 16-25, 25-21, 15-10). The two squads will face off once against on April 5 to determine which team will move on to the Final Four in Bucharest where they will meet CSM Volei Alba Blaj.

#TatianaKosheleva from @GSVoleybol1905 got injured, but for sure she will keep on supporting her teammates in this #playoff6 match vs. @igor_volley