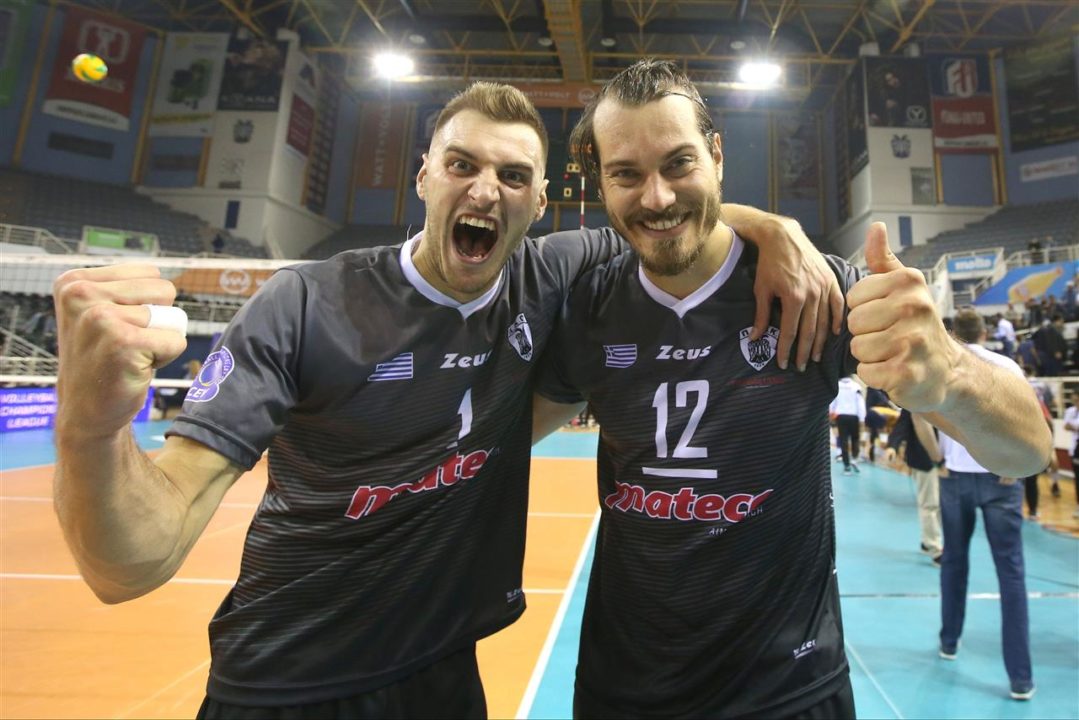 PAOK left the door slightly open for Istanbul BBSK in the return leg by not closing out the match in the 3rd or 4th set. After jumping to a 2-0 lead, Istanbul kept chipping way. They took 2 sets and forced a tiebreak. PAOK prevailed in the 5th set, but only getting 2 points from the match means a win in 3 or 4 by Istanbul at home next week will see them through to the next round.

Dmytro Filippov got double-digit production out of all of the attacking players in his squad at PAOK. Miter Djuric flexed his muscle and showed his experience again in a 25-point performance. He scored on 19 kills and a match-high 6 blocks. The opposite has competed at the highest levels of this tournament, reaching the finals in 2014 with Halkbank Ankara and in 2016 with Trentino.

Evgenios Gkortsaniouk chipped in 18 points as an outside hitter. His points came in the form of 16 kills and 2 blocks. His counterpart, Aleksander Shafranovich, scored 10 points, but was the team’s leading passer with 47% of his receptions being rated as positive and 42% being classified as perfect. Dimitrios Konstantinidis passed 35% of his recpetions positively as the libero with 3 passing errors. 10% of his receptions were rated as perfect.

Both middle blockers finished with 10 points for PAOK. Aleksandar Okolic scored on 8 kills and 2 blocks. He hit .636 (73%) in the win with just 1 attack error. Ivan Ilitch Marquez Sanchez put away 6 kills with a .556 (67%) hitting percentage. He also contributed 3 blocks and 1 service ace. Filippov set PAOK to a .387 (50%) attack efficiency on the night.

Metin Toy led the match for Istanbul BBSK with 26 points. He finished with 24 kills and 2 blocks. His extensive kill count came with an excessive amount of errors. Toy, an opposite for the Turkish National Team, hit .250 (55%) with 13 attack errors. Baturalp Burak Gungor scored 14 points on the outside with 10 kills, 1 block, and 3 service aces. Gokhan Gokgoz, the other outside hitter, contributed 13 points on 10 kills, 1 block, and 2 aces.

Ozkan Hayirli hit .750 (75%) without committing an error in attack for Istanbul. The middle blocker scored 11 points from 6 kills, 2 blocks, and 3 aces. Ibrahim Emet scored 6 points on 4 kills (with 3 attack errors), 1 block, and 1 ace in the defeat. Caner Peksen came off the bench for Istanbul to set in the 2nd set. He started the final 3 sets and ran their offense with a .333 (53%) attack efficiency.

These teams will meet again on October 31. PAOK will play Hercules on Saturday in the Hellenic Volleyball League. They are currently 1-0 in their domestic league. Istanbul BBSK is cuttently 2-0 in the Turkish league and will play Ziraat Bankasi on Saturday.