Gamecocks Pick Up Program Win #800 with Sweep of Clemson 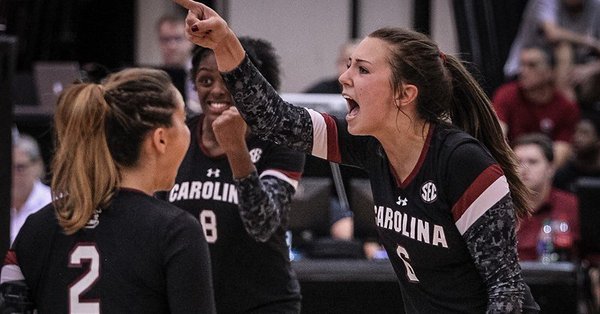 South Carolina claimed the title at its own Gamecock Invitational with a historic and momentous sweep of rival Clemson, marking the program's 800th victory.  Current Photo via South Carolna Athletics

South Carolina claimed the title at its own Gamecock Invitational with a historic and momentous sweep of rival Clemson, marking the program’s 800th victory.

The Gamecocks are now 800-630 all-time, including 17 20-win seasons and seven NCAA Tournament appearances.

Win number three this season is a little more special than usual.

It's the 800th win in our program's HISTORY! Who better to get it against than our rivals in front of a record-setting crowd, way to go, #Gamecock nation! pic.twitter.com/42MgdH6N6Q

It was also offense by committee for the Tigers. After eight players got in on the offensive action on opening day, six managed three or more kills against the Gamecocks. Adria Oliver downed 10 kills at a .444 clip, while Ava Pritchard (8), Ashtynne Alberts (7), Brooke Bailey (6), Alyssa Deloney (4) and Gabby Easton (3) followed. Easton notched a 27-assist, 10-dig double-double, while Pritchard put up a team-best four blocks.

The Tigers lost All-ACC outside hitter Kaylin Korte to a knee injury in an exhibition match last Saturday.

Clemson rallied from down 9-5 to tie Set 2 at 13-all, but could not break through. South Carolina put some distance between the teams with a 5-1 run, including two McLean kills, and held on for the 25-22 win.

The Gamecocks raced out to a 10-3 lead in Set 3 with four Vastine putaways and four Clemson miscues. The Tigers got within three at 20-17, but South Carolina cut the rally short, wrapping up the program’s 800th win and the sweep with a 5-1 run. Robinson notched two kills and a block in the final stretch, including the match winner.

Stat Leaders: AJ Lux and Leah Clayton led the way for ETSU with 17 and 16 kills respectively, each hitting better than .450 at .625 and .467. Clayton rounded out first career double-double with 11 digs.

Madison Green was tops among the Islanders with 12 kills on a .440 hitting effort to go with seven digs and three aces. Jenna Lyons followed with nine kills and two aces.

How It Happened: After tying at 9-all, ETSU scored eight of the next 12 in Set 1 to go up 17-13 and gain enough separation to hold off the Islanders in a 25-21 win. Down 24-18, Texas A&M-Corpus Christi stayed alive with three Buccaneers errors, before Kaela Massey ended the stanza.

East Tennessee State boasted a six-point edge midway through Set 2 at 14-8. TAMCC would get no closer than four the rest of the way, making it 24-20, stopping two set point tries with a service error and a Green kill. Lux prevented  further comeback at 25-20.

ETSU went up by five at 14-9 in Set 3 as Lux racked up six kills and a block, but the Islanders battled back with an 8-1 run, including three Green putaways. Down 20-17, the Bucs countered with five straight points, taking a 22-20 lead on a Marija Popovic ace. The teams tied at 22 and 23, before a hitting TAMCC error and a final Lux putaway wrapped up the match.