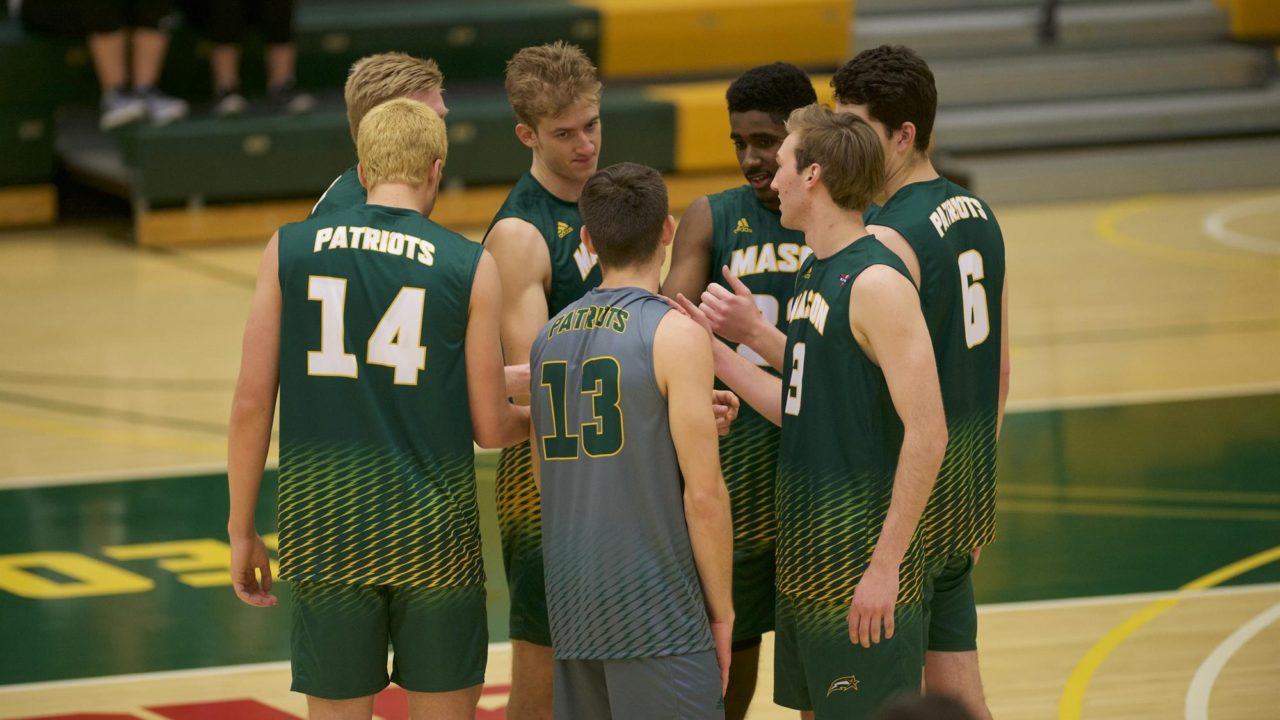 The George Mason Patriots kept their post-game hopes alive on Friday as they beat NJIT 3-0 to keep their post-season hopes alive. The weekend represents senior weekend for GMU, which means the last home games of their seniors’ careers.

With the result, NJIT plummeted to 7th in the 8 team conference – though that means only 1 loss behind 3rd-place Sacred Heart. George Mason is one of 4 teams that sit at 6-5, and along with NJIT, Sacred Heart, Princeton, and Harvard, one of 5 teams fighting for 4 spots in the EIVA post-season tournament.

While the 3-0 score makes the win seem easy, it was not as such when watched. In the 1st set, team captain Jack Wilson had 3 service errors, including one that pushed NJIT to 24-21. Wilson recovered immediately, though, with a kill on the next point, that led to 4 straight for the home team and eventually a first set win.

In the 2nd set, George Mason was able to mostly hold in check NJIT star hitter Jabarry Goodrige, with just 3 kills in the frame for the nation’s leading scorer. Goodridge, however, got an ace to push the set to 24-24 and assure extra points. He gave it right back, though, with a service error a point later, and another key Jack Wilson kill put Mason up 2-0.

The 3rd set had much less drama than did the first two. Even with only 3 Wilson kills, George Mason held a comfortable lead throughout to finish the game off in a sweep that belied the true competitiveness of the day.

Wilson wound up with 13 kills (6 errors, 23 attacks, .304) as the only Patriot in double figures. Graham Gresham had 9 errorless kills on 12 swings though for a whopping .750 hitting percentage – part of an overall .434 day. Gresham also contributed 4 block assists and 1 solo block.

Mason will finish their regular season against Princeton, St. Francis, and Penn State. Penn State and St. Francis are the top two tetams in the conference, while Princeton is tied with Mason at 6-5 in EIVA play. A win on Saturday would be another crucial tally in the Patriots’ favor as they battle to keep their season alive.

FAIRFAX, Va. – George Mason University’s men’s volleyball team made another step in the right direction to live up to its postseason ambitions by defeating a strong NJIT team 3-0 in the RAC Friday.

It was not as easy as it seems, however. Captain Jack Wilson did not start his Senior Weekend in the most desirable way as his third service error of the first set gave NJIT a triple set point at 24-21.

Nevertheless, Wilson responded with a kill right away and started a momentum-turning 4-0 run and a 7-2 run that allowed the Patriots (13-11, 6-5 EIVA) to take the set 28-26. The opposite hitter was at the heart Mason’s fifth-straight victory with match-high 10 kills, team-high two aces, and four digs. The result had a major impact on the EIVA standings with three matches to go – defending champion Mason moved up to fourth spot while NJIT (6-6, 13-10 EIVA) dropped down to seventh.

Roles flipped in the second set, which also went to extra points, when Jabarry Goodridge’s fifth ace in the match tying the score at 24-24, eliminating Mason’s double set point. The Patriots did not crumble, though, and won the following two points, to double their lead in the match with a Wilson kill for 26-24.

The defense played a key role in the third set, limiting the Highlanders’ scoring leader Goodridge (10 kills, 5 digs), who also leads the nation in kills per set, to two kills and .000 hitting. Mason’s senior libero Johnny Gomez had another solid night with match-high 12 digs, highlighted by an incredible foot dig that set up one of sophomore outside hitter Kyle Barnes’ eight kills (.667 hitting).

Another senior, middle blocker Graham Gresham, led the Patriots’ defensive efforts at the net with match-high five blocks. His big night extended on the offensive front as well, where he was was flawless and had nine kills on .750 hitting, best among all players with more than nine attack attempts in the match.

It was precisely Gresham who put the cherry on the cake with a kill for 25-17 in the third set. The outcome of the set was largely decided by another 7-2 Mason run – this time much earlier – that put the Patriots in the lead for the first and final time at 8-4. Head coach Jay Hosack’s team had more blocks in the third set than NJIT had in the entire match – 3.5 – including a solo effort by junior setter Brian Negron, who had 36 assists in the win.

Mason has another important test this weekend, against Princeton on Saturday. The match, which will also be a RAC farewell for Wilson, Gresham, Gomez and outside hitter Radoslav Popov, begins at 7 p.m.

The Highlanders defeated George Mason earlier in the season 3-1, when they were ranked 15th in the nation.

Raymond Kowalski and Kevin Myren each posted six kills each.

The first two sets were closely matched, with the Patriots winning 28-26 in the first and 26-24 in the second.

In a back and forth first set, the Highlanders held a 24-21 lead before George Mason worked their way back with a kill by Jack Wilson and two attach errors by NJIT.

Goodridge tied it at 26 with his fifth kill of the set, and with another attach error and another big kill by Greensalde, George Mason took the set.

The second set was another close one, with neither team leading by more than three points throughout the whole set.

One point away from losing the set, Goodridge tallied a service ace to tie the score at 24, but with a service error and a kill by Wilson the Patriots took the set and the 2-0 lead.

The third set was in George Mason’s favor early on, and they were able to sweep the Highlanders after winning the third set 25-17.

The Highlanders take a break from EIVA play, hosting Springfield on April 12 for a 6pm game in the Fleisher Athletic Center.