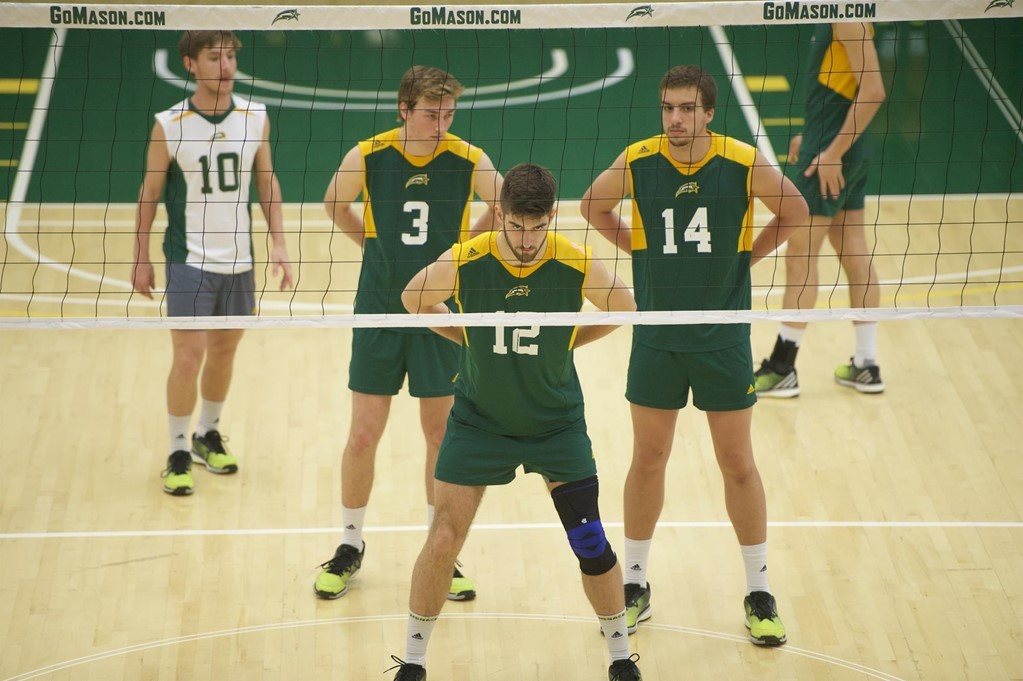 The George Mason men’s volleyball team took down Charleston in a three set sweep in their EIVA opener.

To lead the George Mason offense was Jack Wilson who put down 11 kills on the night, while Garrett Kollar added seven kills, four aces and five blocks. In the back court, Sam Greenslade picked up six digs, while Johnny Gomez added five.

For Charleston, Rajahl Moxey, Eugene Stuart and Brian Cranston each contributed five kills in the match, with Anthony Rivera picking up five digs in the back row.

History repeated itself on Thursday as George Mason’s men’s volleyball team swept Charleston (W.Va.) just like it did a year ago to begin its Eastern Intercollegiate Volleyball Association title defense with a win.

-Mason will go down in history as the first team to win in Charleston’s brand-new Werhle Arena as Thursday’s match was the inaugural athletic event.

-The Patriots led after the playing out of all but five of the 132 points in the match. The Golden Eagles had only one lead in the contest, which came after the very first point in it.

-Kollar completed a well-rounded performance with a match-high five blocks – two of them solo – and one spectacular pancake dig on the defensive end, which led to a Mason point in the third set. Another big man, freshman outside hitter Sam Greenslade (2 kills, 1 block), marked his first start as a Patriot with match-high and career-high six digs, which is how many he had in total before Thursday’s contest.

-Stuart’s match-opening kill triggered a collective roar by Charleston’s starters, bench and fans in the Wehrle Arena, but Mason tamed the excitement by winning the following five points before the lead grew to five at 7-2 after consecutive Kollar aces. A slump in Mason’s play then allowed a 4-1 run by the home team that cut the lead to just one at 12-11 after a kill by Donovan Wilmott (4 kills, 1 service ace). Another kill by Kollar, followed by a block by him, Wilson, and redshirt sophomore middle blocker Langston Payne, who had career-high 4 blocks, increased the lead to three, 14-11. The Patriots’ advantage never fell below two for the remainder of the set and even went up to as many as six points twice – with a block by Kollar and freshman opposite hitter Bradley Creamer (22-16) and a Kollar kill (23-17) – before a bad set by Rivera put an end to the opening set, 25-21.

-The Patriots had their most modest attacking performance in the second set (.263) but held their opponent to -.087, which helped them be in complete control for the most part. An early 7-2 run allowed Mason to go into double digits with a six-point lead after Wilson buried a kill to correct an error from the previous play, 10-4. By the time head coach Jay Hosack‘s team had doubled those points, so had nearly the lead as Mason reached the 20-point mark with the match’s largest lead of 11 points. Wilson was involved again, this time aiding Payne for a block on former teammate Bryant Ekstein. Payne later single-handedly blocked Stuart to stop a 4-1 Golden Eagles run at 22-13. Charleston outscored Mason before another bad set doubled the Patriots’ set lead at 25-18.

-Aided by the 9-5 run on which it ended the second set, Charleston hung with Mason early in the third set before a solo block by Kollar gave the Patriots their largest advantage at 10-6. The Golden Eagles came around again as one of Ekstein’s four kills brought them within two at 11-9. Mason responded with a run to grab a new set-high lead in mid-set after a kill by freshman middle blocker Bryce Gatling (2 kills, .667 hitting), 15-10. That lead grew to six twice, including 18-12 thanks to a kill by freshman outside hitter Hayden Wagner. But the Golden Eagles refused to give up in their season opener and were within two once again after a Cranston kill made it 18-16. The Patriots picked themselves up late in the set and allowed only two additional points before another Charleston error closed the match at 25-18 and 3-0.

Road lessons learned: “We’ve got to clean up little aspects of the game. We are leaving too many points on the table. Whether it’s a free ball, a missed blocking assignment or not running the right route, we are leaving points that we shouldn’t be on the table. The kind of teams that we want to face at the end of the year will not give us freebies that often, so we have to make sure that the foundation is made of cement and not made of sand.”

The Patriots will have the weekend off after the week-long road trip and will have their home opener on Jan. 20 against King before taking on No. 8 Loyola Chicago the following night. Both matches will be at the RAC Gym and will start at 7 p.m.