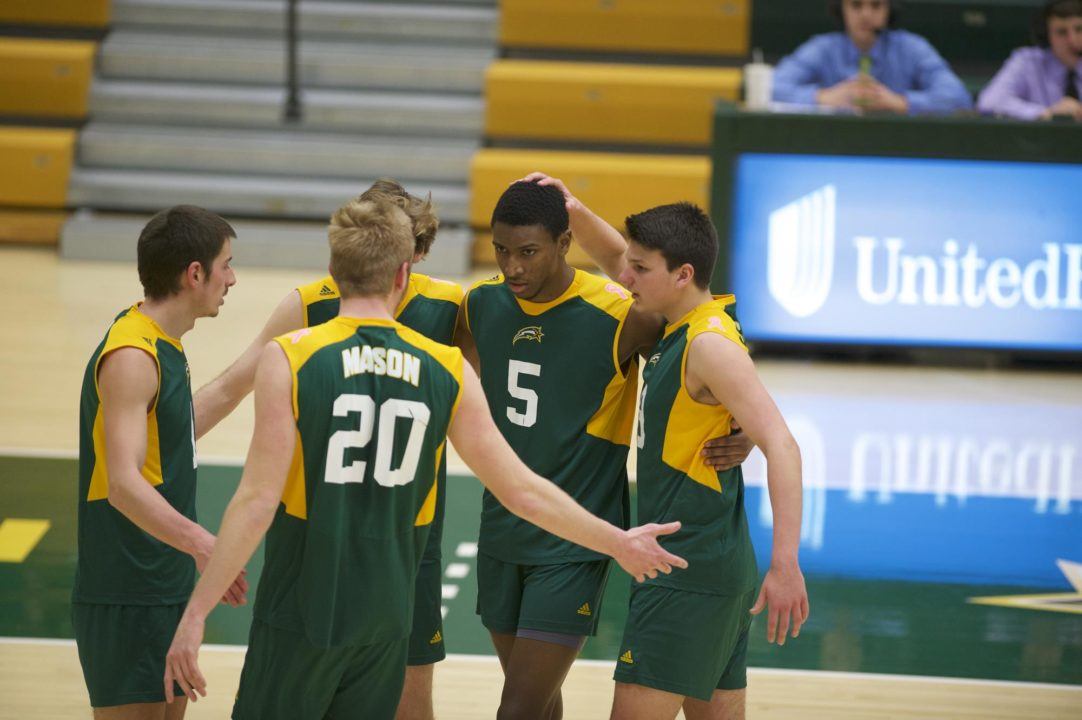 BELMONT, N.C. – George Mason University’s men’s volleyball team had not won an opening match in five years, but when it did on Friday, it was in the most convincing fashion. In just over an hour, Mason swept Conference Carolinas member Belmont Abbey in the Crusaders’ Wheeler Center.

-The match started in the most climactic way possible for Mason as junior setter Brian Negron served a cannon that aced for the Patriots’ first point of the season. Negron continued terrorizing Belmont Abbey’s receivers all night and finished the contest with a match-high performance of four aces – his total for the entire 2016 season – along with match-best 16 assists. Powerful serves featured all across the board for Mason, which accumulated 11 service aces on the night while the Crusaders managed only four. Attacking efficiency was another positive for Mason in the season opener as the Patriots committed just five errors and hit .527 as a team as opposed to their opponent’s .094 performance.

-The home team was led offensively and defensively by senior outside hitter Robert Nixon, who had match-high eight kills and four digs.

-Mason was in control for the majority of the match and led after 108 of the contest’s 123 points. Out of the 15 points after which Mason was not in the lead, Belmont Abbey led in six of them. The Crusaders’ largest lead was one point and their best run was 7-4, which allowed them to come within two at 22-20 in the end of the first set, but kills by redshirt senior middle blocker Graham Gresham and Popov gave the Patriots some breathing space. Sophomore outside hitter Kyle Barnes then earned his place among the six Patriots who scored points directly from a serve and settled the opening set at 25-21.

-Ironically, Mason had its poorest attacking performance in the second set, when it hit only .333, but that was enough for the most resounding scoreline on the night. Head coach Jay Hosack’s team demonstrated solid side-out play, converting nine of its 12 opportunities and did even better at keeping Belmont Abbey’s attackers at bay, holding the Crusaders to only two kills and -.333 attack efficiency in the period. The lead reached double digits for the first time on a kill by Payne for 19-9. Nothing changed for the remainder of the set and Mason outscored the Crusaders 6-2 to close the set and edge closer toward a successful start of the season.

-A 3-0 Belmont Abbey run culminated by an ace from Brennan Breyer gave the Crusaders their second lead in the third set at 5-4. Unlike when it picked up its first lead, head coach Sean Manzi’s team showed toughness and remained reluctant to give its advantage away, forcing Mason’s only timeout of the match at 8-7. It could not have been better timed by Hosack, because Mason won four-straight points when play resumed and six of the seven after the timeout before Manzi asked for a timeout himself at 13-9. Greenslade’s third ace in the match increased the Patriots’ advantage to six at 15-9. Mason reached the 20-point mark with an eight-point lead following a kill by Creamer and it seemed like that broke Belmont Abbey’s spirit, because the Crusaders committed an error of some sort for each of the Patriots’ final five points in the contest for the final scoreline of 25-16.

Gradual improvement: “I expected us to have some first-match jitters and for a couple of guys to figure some stuff out, so I am pretty happy with the performance.” – Mason’s head coach Jay Hosack

“We missed a couple of serves in the first set. After that, we settled down and later in the match we put in two players who are working their way into the lineup, so I think that the scores are pretty indicative of how we played in the match.”

Fresh impact: “Let’s talk about Langston Payne, [who] came in as a redshirt sophomore and hit .556 in his first start for us. He’s going into his third year with the program and this was his first start, so I was pretty happy about that. It’s nice to get the young guys in and give them a little taste of what it’s like to be on the court. However, we were within the top 10 teams in the country in preseason and all of these guys will have to work hard and practice hard and figure out their place because I cannot play everyone once we are mid-season.” – Mason’s head coach Jay Hosack

The Patriots will make a short trip south for a meeting with another Conference Carolinas member – Limestone – on Saturday evening. First serve in Gaffney, S.C. is at 6 p.m.

Belmont Abbey finished 18-11 last year, posting an 11-7 mark in conference play. Beyner is the top returning attacker, having registered 156 kills and a .258 hitting percentage. Valentine was second on the squad in digs last year with 171. The 2017 squad has a mix of experience with seven upperclassmen and seven freshmen.

George Mason was 18-12 in 2016, winning the EIVC and advancing to the Men’s National Collegiate Volleyball Championship first round. Redshirt senior Jack Wilson led the Patriots in kills with 267 (3.66 per set average) in last year.

Admission is free to all Belmont Abbey volleyball matches. Live streaming and stats are available for home events at abbeyathletics.com.