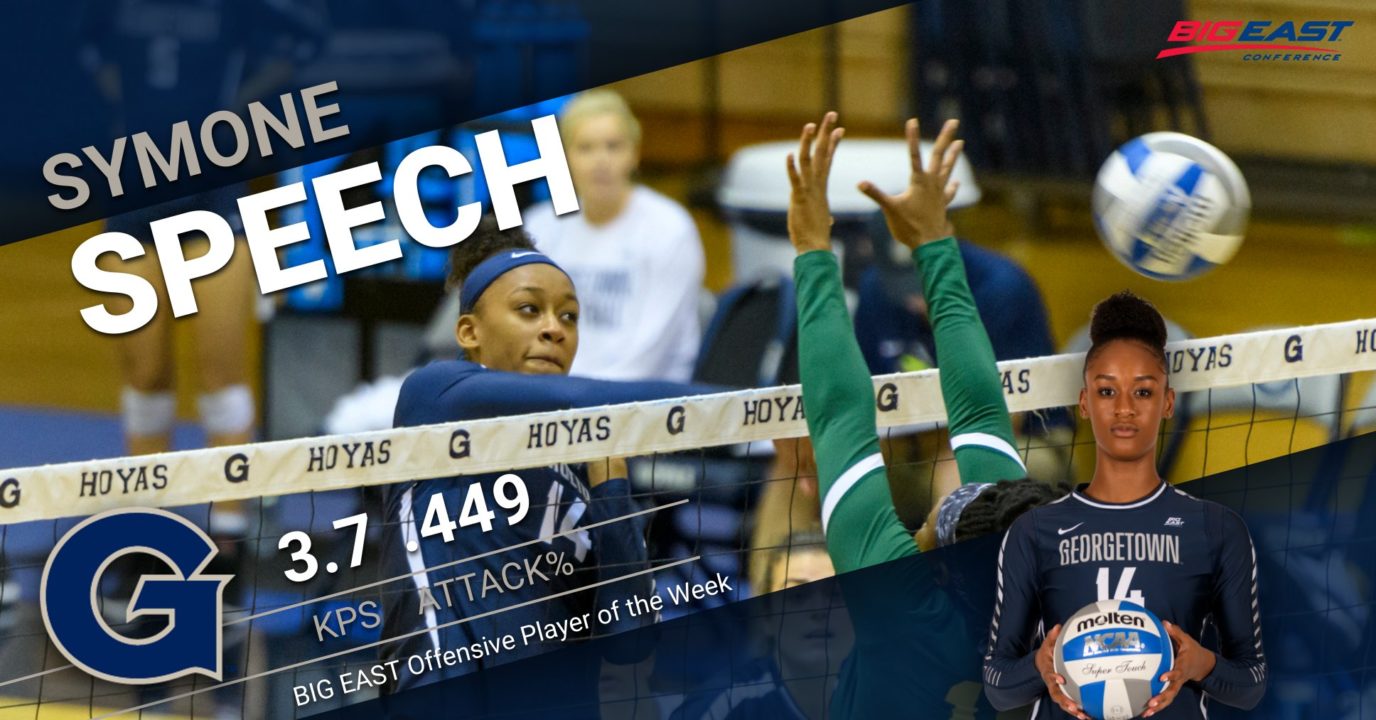 Speech helped the Hoyas to a weekend sweep by hitting .449 in Georgetown’s wins over Morgan State, Alabama A&M and Loyola Maryland, dropping only one set overall. In the match against Loyola, Speech hit .684, which was the match high from the past week. Speech’s .684 was also the second-highest hitting for the season so far, she holds the high with .778. The senior added 3.70 kills per set, including 15 kills against AAMU and 13 versus Loyola. The senior also had seven digs and two service aces as she was named to the All-Tournament Team for her efforts.

Senior middle blocker Symone Speech was named the @BIGEAST Offensive Player of the Week after leading the #Hoyas to a perfect 3-0 record over the weekend at the Dig The District Invitational! #HoyaSaxa #BIGEASTvb pic.twitter.com/rarF1WWqj9

The junior libero averaged 5.40 digs per set over the weekend to give the Bluejays a 2-1 record in the Illini Classic. She posted 12 digs versus Lipscomb and 16 against UNI, winning both in straight sets. Witt capped off the weekend with a season-high 26 digs in a four set loss at No. 8 Illinois. Witt has now had 10 or more digs in a career-high 15 straight matches.

🏆🏅🎊
Congratulations to Brittany Witt on earning this week's BIG EAST Defensive Player of the Week award!#GoJays

The rookie led the Red Storm offense with 3.69 kills per set in a weekend sweep at the Dog Pound Challenge. She hit .314 in St. John’s three wins over Rutgers, Holy Cross and host Connecticut, along with averaging 1.92 digs per set. Alexakou also set career highs in kills and blocks versus Rutgers with 16 and six, respectively, to garner the tournament’s MVP honors.

#SJUVB has two earn BIG EAST Weekly Awards. Congratulations to Efrosini Alexakou for being named Freshman of the Week and Amanda Sanabia for her second-consecutive week on the Honor Roll!

Gregory led the Bulldogs with 3.55 kills per set to help Butler go 2-1 in the Bulldog Brawl. She recorded a season-high 17 kills against Cleveland State and added another 14 versus Santa Clara, where she also had a season-high four blocks. The junior topped off the weekend with a team-high 3.91 points per set.

Kloth averaged 4.00 kills per set in Creighton’s three matches over the weekend with 23 coming against No. 8 Illinois. She also averaged 1.90 digs per set, and added a career-high 13 in a sweep over Lipscomb.

Higareda recorded double-digit digs in all three wins for the Hoyas, averaging 5.30 digs per set. The senior tallied 15 digs against Morgan State, 18 versus AAMU and 20 against Loyola Maryland to go along with three service aces.

Konovodoff averaged a team-high 5.89 digs per set this weekend, including 17 against No. 6 Wisconsin. She then added 24 versus Tulsa and 12 against Illinois State. The sophomore also averaged 1.22 assists per set.

Sanabia was named to the All-Tournament Team at the Dog Pound Challenge after averaging 4.70 digs per set. She posted 19 digs versus Rutgers, 13 against Holy Cross and 15 versus Connecticut, while adding six assists.