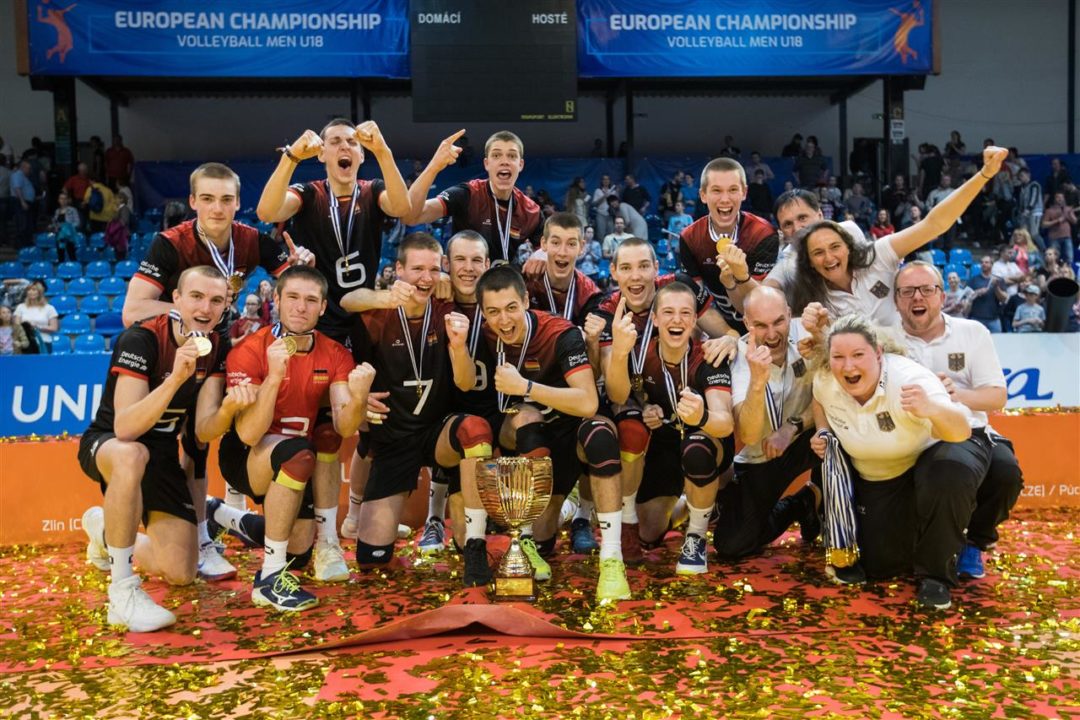 Different than what happened in their poor play match up, this Sunday Germany defeated hosts and defending champions Czech Republic 3-0 and were crowned #EuroVolleyU18M champions.

Germany started off the first set with a monster 13-3 run in its favor, which then ballooned up to 23-14. Showing that it was not about to be easily beat, the Czechs put on a 8-0 run to bring the game to 23-22. But, the streak ended there, with the Germans claiming the opening set 25-22. The miracle run drained the Czechs out of all their energy, as Germany only had to manage the next two sets to calmly come out with 25-17 and 25-20 wins, closing the game.

The future looks promising for male volleyball in Germany, as its senior team is currently ranked 10th in FIVB rankings. It can only get better once its U18 champions grow up to become star players as well.

“The situation was similar like yesterday – we served very well, put a lot of pressure with our serve and fortunately to us the Czech team did not show their best game. We also showed a great blocking game, because they were not able to receive the ball and after that they were hitting balls every time against our compact defence and that was the biggest difference.” – Germany’s head coach Matus Kalny

“Germany had the rocket start to this match with their hard service and that is why they were successful. Unfortunately, we did not cope well with the big pressure that comes from playing at home. But our fans in Zlin were great and we thank them for this excellent atmosphere that let us claim the silver medals. Our dream before this tournament was to qualify for the World Championsip, but eventually we fought for gold.” – Czech Republic’s captain Jiří Mikulenka

“Germany were as in the previous match great at service and we did not receive well. This was the deciding factor of today´s final. Our physical form and capability improved dramatically during this tournament, unfortunately in today´s match we made mistakes and were not successful. But at home it is never easy. The silver medals are for us a fantastic result. For the players, I would like to say that they must enjoy the final more next time they get to play one.” – Czech Republic’s head coach Jiří Zach

A post shared by Deutscher Volleyball-Verband (@team_germany_volleyball) on Apr 16, 2018 at 1:16am PDT