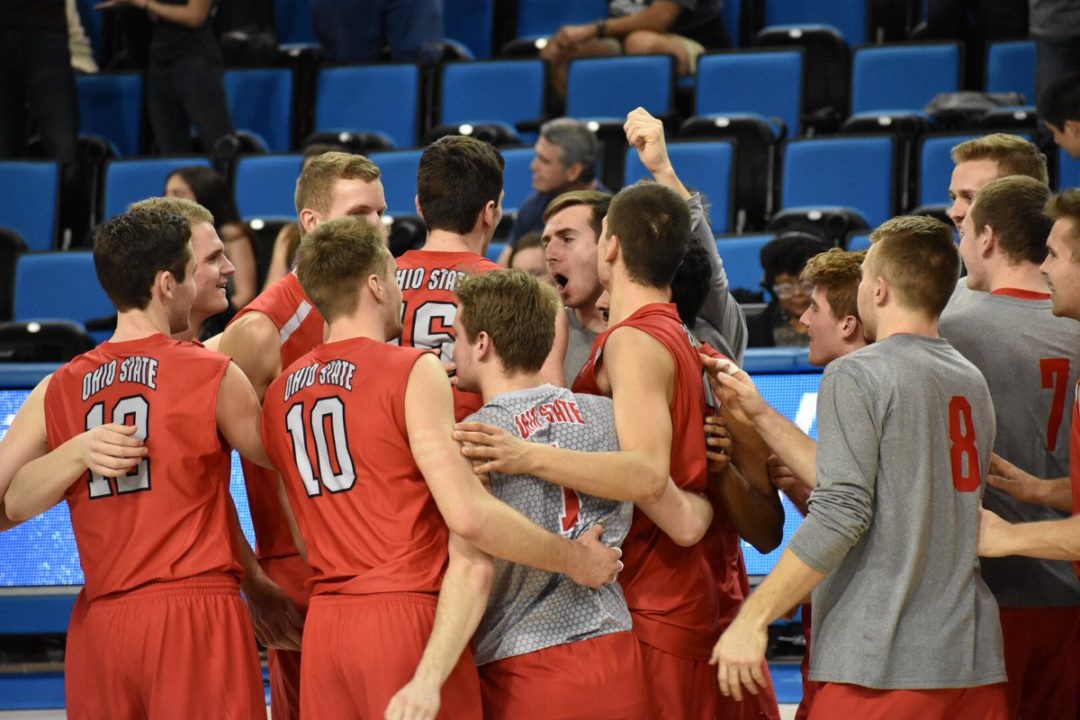 The top four seeds of the MIVA Conference faced off in semifinal matches Wednesday night with Ohio State and Loyola moving on to battle it out for the championship and the league's automatic NCAA berth on Saturday. Current Photo via Ohio State Athletics

The top four seeds of the MIVA Conference faced off in semifinal matches Wednesday night with Ohio State and Loyola moving on to battle it out for the championship and the league’s automatic NCAA berth on Saturday.

No. 4 seed Lewis took on regular season champions Ohio State in Columbus, while No. 3 seed Ball State took on No. 2 seed Loyola. In the end, home court advantage and dominating blocking and serving efforts proved key to victory.

Stat Leaders: Redshirt freshman opposite Jake Hanes led a trio of Buckeyes with double-digit kills, posting 18 putaways to go with a team-best three aces and seven blocks. Senior outsides Nicolas Szerszen and Maxime Hervoir followed with 15 and 12 respectively. Szerszen rounded out a double-double with a team-high 10 digs, while redshirt junior middle Blake Leeson put up a team-leading 10 blocks.

It Was Over When: Two Szerszen kills and back to back aces by Hanes helped OSU to a 7-3 lead in Set 5. Lewis would get no closer than three the rest of the way. A Laffin ace boosted the Buckeye margin to five at 10-5, then a block and an ace by Szerszen lifted Ohio State to a 13-7 advantage and forced the Flyers’ final timeout. The break iced the server, but a bad set and hitting error sealed the OSU win and finals berth at 15-8.

Key Stats: Ball State kicked off the match with a .448 hitting effort, committing just one hitting error in the 25-22 win. The Cardinals fell off after that, including hitting efforts under .100 in the final two stanzas of the four-set loss. For the match, Loyola outhit BSU .323 to .182, while dominating its foes at the net to the tune of a 15-4 advantage in blocks. The Ramblers also boasted a 9-5 edge in aces and 55-41 lead in kills.

Freshman outside Ben Chinnici and senior middle Matt Walsh led the way for the Cardinals with 15 and 12 kills respectively. Chinnici hit at a .324 clip and added eight digs, while Walsh put up three blocks. Senior outside Mitch Weiler pitched in eight kills, 11 digs and two stuffs. Junior middle Parker Swartz served up three of the team’s five aces. Top hitter Matt Szews was held to just one kill in the match and hit -.200 with four errors in 15 swings.

It Was Over When: The teams tied 13 times in Set 4, last at 22, but Loyola led by as many as three at 4-1 and 8-5 before the Cardinals caught up at 9-all, sparking the string of knot-ups. Neither side led by more than two after that. Ball State took its first lead at 10-9 on a Chinnici kill and went up 17-16 on a Jake Romano ace. Trailing 19-18, the Ramblers scored four of the next five to go up 22-20, including two blocks and a kill by Jendryk. A pair of Walsh putaways leveled the score at 22, before kills by Garrett Zolg and Mahan and a ball handling error sent Loyola on to the final with a 25-22 win.