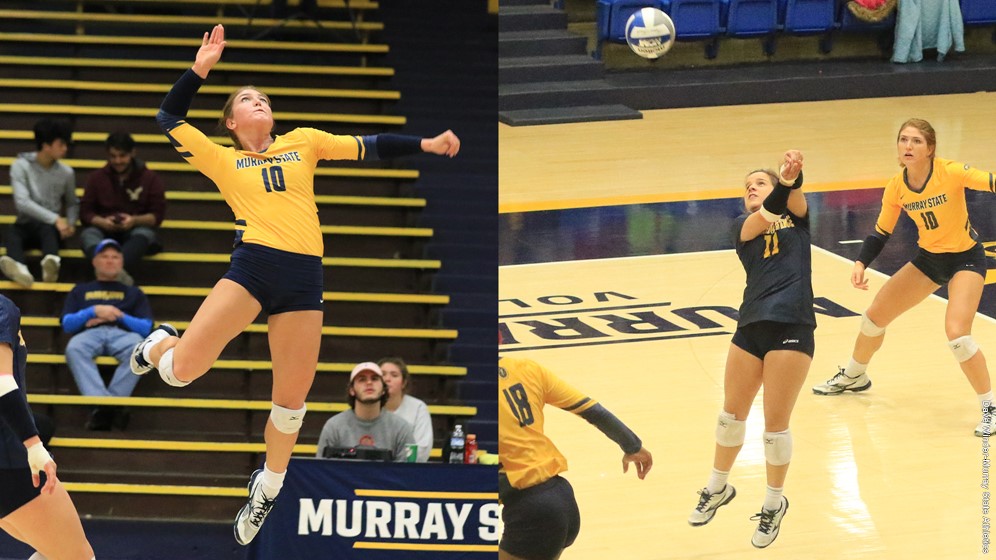 Rachel Giustino, OH, Jr., 5-10, Algonquin, Ill. – Murray State
Giustino recorded 35 kills, a .232 hitting percentage, two service aces and six blocks as the Racers went 2-0 last week. She also added 39 digs over the two matches. In the match with Southeast Missouri, Giustino had 20 kills and a season-high 26 digs. She followed that with 15 kills and 13 digs in the win over UT Martin.

For the second straight week, the Racers take home two @OVCSports Player of the Week awards as Rachel Giustino and Becca Fernandez earn the honors.

Becca Fernandez, L, So., 5-2, Carol Stream, Ill. – Murray State
Fernandez led Murray State with 50 digs (7.14 dps) over its two wins. She had 28 versus Southeast Missouri and followed that up with 22 versus UT Martin. She helped the defense hold its opponents to a combined .126 hitting percentage.

Kristen Stucker, S, Sr., 5-10, Johnston, Iowa – Austin Peay
Stucker dished out 74 assists and led Austin Peay to a .311 team hitting percentage over its two victories last week. She led the Govs to the fourth-best attack percentage (.432) in program history against Southeast Missouri, recording 40 assists. She had 34 assists versus UT Martin. For the week, she had four kills, a .300 attack percentage, 16 digs and three blocks.

For the 6th time in 2018 and 20th time in her career Austin Peay setter Kristen Stucker has earned the @OVCSports Setter of the Week award.

Hope Everett, MB, R-Fr., 6-3, Norris City, Ill. – SIUE
Everett recorded 22 kills and the best single-match hitting percentage by a SIUE player this season with .463 against Eastern Illinois. She followed that with 12 kills against Tennessee Tech to improve her season-hitting percentage to .249. She finished the week with 34 kills, a .391 hitting percentage, three digs and seven blocks.