Gold for Latvia and Russia at Euro Beach Volley U22 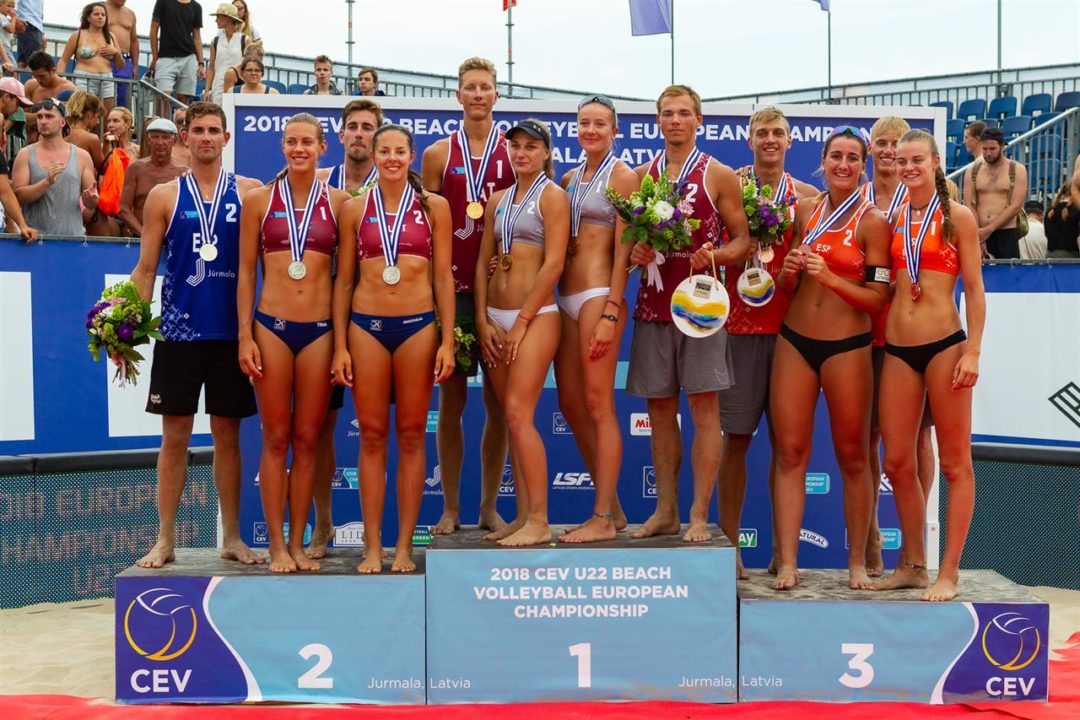 The president of Latvia, Raimonds Vejonis, celebrated on the stands as his fellow countrymen performed greatly during the 2018 Euro Beach Volley U22 Tournament Current Photo via CEV

The president of Latvia, Raimonds Vejonis, celebrated on the stands as his fellow countrymen performed greatly during the 2018 Euro Beach Volley U22 Tournament. Mihails Samoilovs and Kristaps Smits cruised to a 2-0 (21-13, 21-19) win over Spanish duo Alejandro Huerta and Javier Huerta en route to a gold medal, while Anastasija Kravcenoka and Tina Graudina took home the silver medal.

“After the last point in the second set, I couldn’t realise what was going on, why people were standing on their feet, applauding. Then I looked around and I saw that we had won. This feeling was just amazing. Winning at home is something that can’t be described.” – Samoilovs

“I don’t have words. It is wonderful. I want to thank all the people who came here to support us, the organisers of the tournament and the CEV for giving us the opportunity to feel the emotion of playing at home this kind of tournament.” – Latvia’s coach Lauris Iecelnieks

“There are so many emotions right now, that we just don’t know what to say. We are happy. We did a lot of work, step by step as we said at the beginning of the tournament and on Sunday we showed what we can. The atmosphere here in Jurmala was great. Now we continue our journey in the world of Beach Volleyball, as we have to play at the Major Series in Vienna, so there is no time to rest.” – Russia’s squad

Semis in the #eurobeachvolleyu22 🎉🌞 against Spain tomorrow🏐🙏