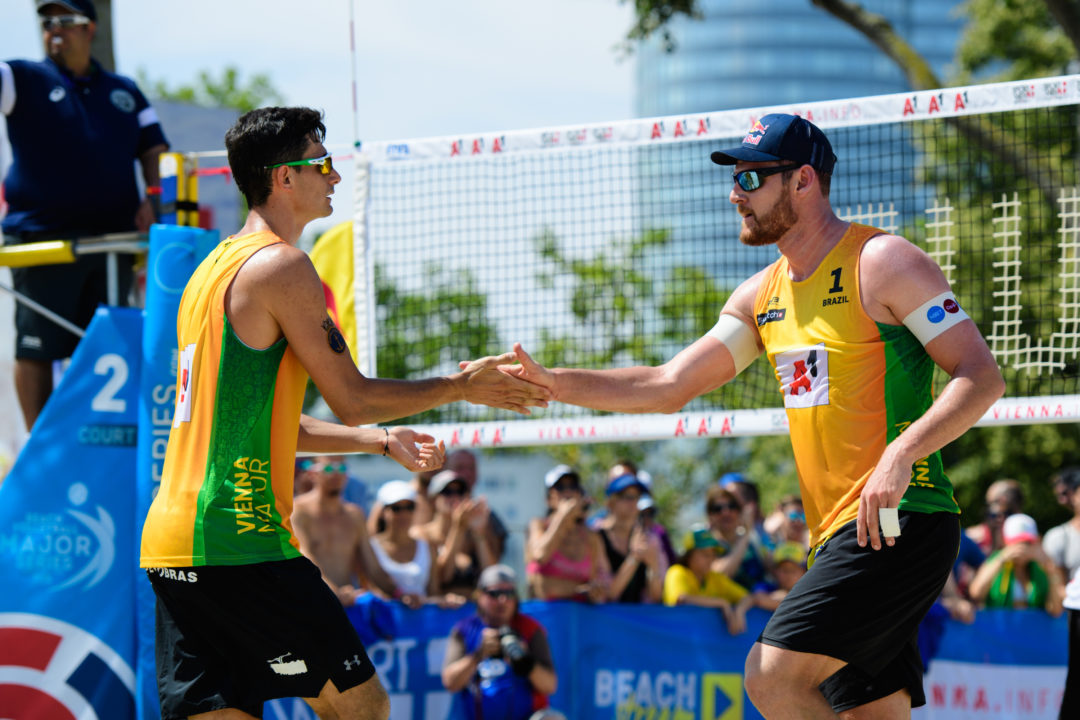 Teams from nine countries remain among the final 16 men's pairs at the Vienna Major, including three from Brazil and two each from Austria, Russia, Latvia and the United States.  Current Photo via FIVB

After storms delayed the final eight matches of men’s pool play, the final four pool crowns were handed out on Saturday with teams from Brazil, Latvia, Norway and Qatar earning free passes to the second knockout round. The field was then cut from 24 to 16 with the first of two knockout rounds.

The four pool winners were:

No. 24 Cherif/Ahmed Tijan battled through their second tiebreak match in as many days and garnered their fourth win of the tournament including qualifiers, rallying past No. 8 Clemens Doppler/Alexander Horst of Austria.

Alison/Andre also went the distance, coming from behind for the 19-21, 21-16, 15-9 win over Canadian qualifiers Grant O’Gorman/Ben Saxton.

Due to the delayed schedule, the first knockout round also was played on Friday with all but one of the eight matches being decided in straight sets.

The lone exception came as Semenov/Leshukov picked up their second win of the day with a 17-21, 28-26, 15-13 win over Russia’s Oleg Stoyanovskiy/Igor Velichko.

Made it through to the round of 16 here at #viennamajor beating a tough Austrian team today. @redbull @roxvolleyball @klenskin_spf

Four of the top 10 seeds in the tournament were knocked out in Round 1: No. 2 Paolo Nicolai/Daniele Lupo (Italy), No. 4 Pablo Herrera/Adrian Gavira (Spain), No. 6 Piotr Kantor/Bartosz Losiak (Poland) and No. 9 Stoyanovskiy/Velichko (Russia).

The eight teams who advanced to the second knockout round to face the eight pool winners were:

One of the highlights of Round 2 will be a meeting between former Brazilian partners and 2016 Olympic gold medalists Alison Cerutti and Bruno Schmidt. Cerutti is now teamed up with Andre Loyola Stein, while Bruno is playing with Pedro Solberg. Take a look at Alison had to say about the difficulties of changing partners here. Andre discussed his transition to a more defensive role here.

“Playing against other Brazilian teams is always a battle,” Bruno said. “Alison and Andre have been playing really well, they have a lot of power and we respect that a lot. We’ll just keep focusing on our game and hopefully we can keep improving.”

Dalhausser/Lucena will face a tough test in No. 5 Alexander Brouwer/Robert Meeuwsen of the Netherlands, while fellow Americans Taylor Crabb/Jake Gibb will take on Semenov/Leshukov.

Another Top 10 matchup will pit No. 7 Smedins/Samoilovs against eighth-seeded Austrians Doppler/Horst. 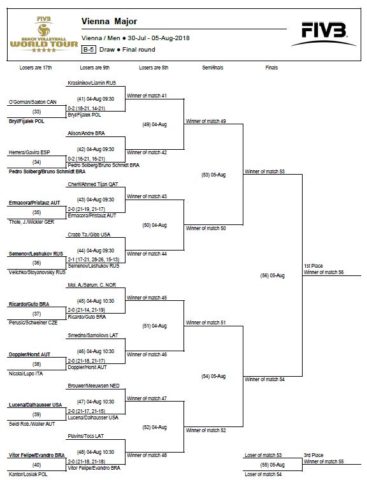 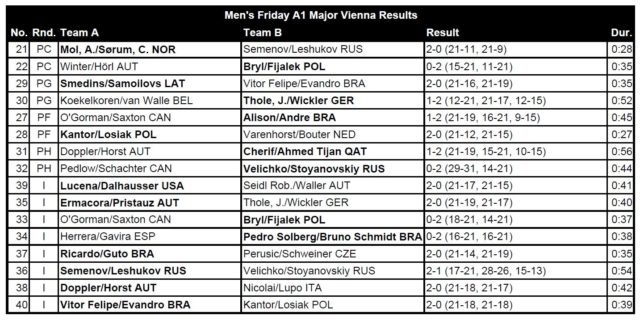