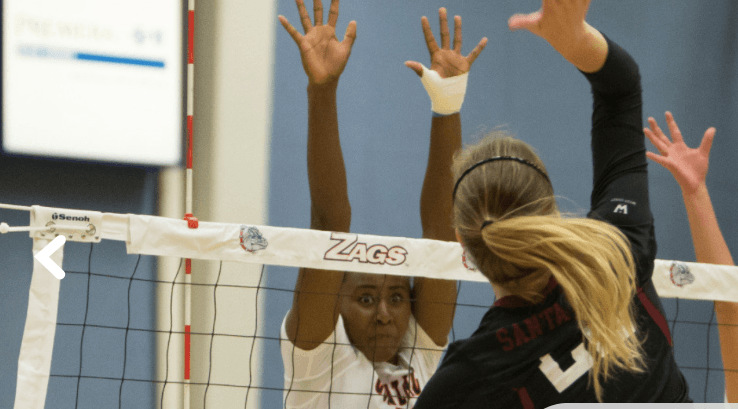 The Zags took the first set for an early match lead, closing out the frame with an 11-2 run Current Photo via GoZags.com- Gonzaga University

It was a rousing homecoming for Gonzaga volleyball Thursday night as the Zags rushed past Santa Clara in three sets (25-18, 25-17, 25-19) at the Martin Centre in Spokane.

The Zags took the first set for an early match lead, closing out the frame with an 11-2 run. After Gonzaga took a four-point lead at 7-3, the Broncos crawled back into the set, tying it at 12-all. The two squads traded points for a bit, but the Zags caught fire, tying the set at 16-16 and allowing just two more points before winning the frame. Gonzaga tallied six kills and a pair of aces during the finishing run, one ace coming fromKatelyn Oppio to take the lead and another from McKayla Ferris for the clinching point.

Gonzaga went wire-to-wire in the second set, winning the first point on a kill from Emmy Allen and never ceding the lead. Four straight points — including two more aces from Ferris — gave the Zags an 11-6 advantage. From there, the Zags slowly built up that margin, taking the frame by eight after a kill from Imani Wimbush and a Santa Clara error. That kill was the fifth of the frame for Wimbush after also landing five the set before.

In the third, Gonzaga used a six-point run to lead at 13-8, but Santa Clara clawed its way back in the frame, coming within one at 19-18. A kill from Ferris halted Santa Clara’s run with a sideout, and Wimbush and Paige Folger each added kills to give the Zags control of the set once more. Santa Clara earned a brief sideout, but kills from Ferris, Allen, and Wimbush finished off the match for Gonzaga and gave the Bulldogs their first win in West Coast Conference play this season.

Wimbush led the team with 14 kills on a .600 hitting percentage, both of which are season highs. This is the second time Wimbush reached double-digits in the category, the first coming August 27 in a five-setter against Utah. Coincidentally enough, her career high of 17 kills also came against the Broncos in 2014.

The home match was Gonzaga’s first of the season after the Zags started 2016 with 12 straight matches on the road. Last year, they posted a winning record inside the Martin Centre at 9-6, including a 5-4 mark in WCC action.

Redshirt senior Sarah Bradley saw her first action since opening weekend and made the most of the opportunity, tallying five kills and three blocks. The five kills are the most Bradley’s landed in two years.

The Zags (8-5, 1-2 WCC) continue their first homestand of the season Saturday, Oct. 1, against San Francisco. That contest will begin at 12:00 p.m., again at the Martin Centre in Spokane. The two squads split last season’s series with each defending their home floor.