No. 7 Washington Defeats Cal After Four 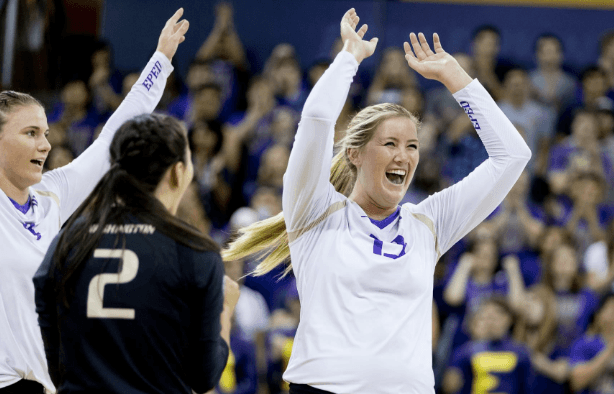 Coming off a heartbreaking marathon five set loss against No. 9 Stanford last night, the Huskies were put to the test heading into intermission even against an energized Bears squad Current Photo via University of Washington Athletics

Courtesy of University of Washington Athletics

Coming off a heartbreaking marathon five set loss against No. 9 Stanford last night, the Huskies were put to the test heading into intermission even against an energized Bears squad. Head Coach Keegan Cook liked how the Huskies answered back. Junior Crissy Jonescaught fire with 11 of her 14 kills over the final two sets without making an error.

“Cal played well, they ran a new lineup and did a nice job playing fearless and taking good swings against us. But a lot of credit goes to our players for their response after the break,” said Cook. “Crissy took a hundred swings in two nights, she put in a lot of work, but she understood that we needed to respond and she made sure she gave her best effort and when she does she can make good things happen, so that was a little bit of leadership in action there.”

Junior Courtney Schwan also was steady throughout and had 7 of her match-high 18 kills in the final set. Schwan hit .421 overall for the match. Freshman Kara Bajema had a nice offensive run with nine kills hitting .400, and Avie Niece added six kills and three blocks. The Dawgs hit .328 overall tonight, with Bailey Tanner racking up 51 assists, while also leading UW with four block assists.

Cook unveiled a new wrinkle at the start of the match as junior Tia Scambray started at the libero spot for the first time in her career. That let sophomore Destiny Julye get a run at outside hitter, and she had a season-high 11 kills. After the second set, Scambray switched back to outside hitter and freshman Shayne McPherson took over at libero. Scambray finished with a match-high 19 digs and added three kills while McPherson had some acrobatic plays amongst 10 digs.

“We have some people who can do some different things, and Destiny has been there for us and we gave her a shot and she did well for long stretches of time,” Cook said. “She was a little better with her consistency, which is not there yet, but she gave two sets of work. Tia responded and came off the bench and did an outstanding job. She played well at both positions but I thought she played great jumping back in at the outside hitter position, as did Shayne at libero, she played a nice match.”

Kara Bajema put away the first two kills of the match for the Dawgs on a slide set from Bailey Tanner. Tanner and Niece put away the first stuff block of the night for UW and then Niece terminated in transition for 4-4. Destiny Julye‘s first kill gave the Dawgs their first lead of the night and the next point was overpassed by Cal and Julye got a second kill for 7-5. Crissy Jones‘ first kill of the match extended the lead to 10-6 and Julye finished in transition from the left for a five-point lead. Another quick set to Bajema was put away for a 12-7 edge. Schwan found an extreme angle inside the block for a 14-10 lead. The Bears got within two, but UW answered with a pair of points as Schwan rolled one to the middle. Jones finished on the right side for 17-13 and Cal used its first timeout. The Bears came out of the break with a pair but Jones got the sideout with a hard swing for 18-15. Julye drilled two kills in a row at the left pin for 20-16, but two straight Cal aces including one off the net helped Cal pull within a point. The Bears then tied it up at 20-all with a wild rally, but then served long to snap the 4-0 run. An ace from Bajema got UW back up 23-21 but she sent her next into the net. Schwan took a long set from Tanner and found the floor to get to set point at 24-22. Cal saved the first in serve-receive, and UW called timeout to plan its next chance. On the next rally, Schwan had a roll shot that was just kept alive and put back over to UW, and with another chance, Schwan hung in the air and put it off the block’s hands and down for the win, 25-23. Both teams were hot in set one, with UW just a little hotter at .405 compared to .343 for Cal. Julye had a season-high seven kills in just the first set alone, and Schwan had five on seven swings without an error to hit .714.

Cal came out and grabbed the first four points of the second set with some some tough serving, but the Huskies came back with a 5-2 run to pull within a point at 5-6. A bit rejection from Tanner and Niece and a setting error by the Bears had things back even at 7-7. Niece terminated a quick in serve-receive from Tanner for 9-all. The first ace of the match for Jones gave UW its first lead at 11-10. Julye finished for a 12-10 lead, but the Bears caught fire with the next five points in a row to force the Huskies to a timeout at 12-15. Cal got caught in the net to give UW a break out of the timeout and end the run. Tanner dumped one for a kill to make it 14-16, and Bajema had a big dig that led to a Schwan finish to get another point closer. The teams traded sideouts until Cal was called for a center line violation to tie it at 18-18, and then Schwan dropped a float serve right on the end line for a 19-18 lead and Cal called time. Tanner had a clutch dig out of the break and Schwan bump set Julye who tooled the block to score another big point. Julye had a swing for one more but missed it just long to end the 3-0 run, but Niece came back with a tip to end a long rally for 21-19. Jones and Bajema collected a roof on the right for 22-20, but Cal then answered with two blocks in a row to tie it up at 22-22 and UW took time. The Huskies gave up an ace into the seam out of the break, and were in trouble on the next rally, but Julye came inside for a big kill off the block for 23-all. Cal scored in serve-receive to get to set point at 23-24. Bajema came through for the Dawgs to save it, but Cal answered to earn a second chance. Schwan got a kill on a Cal net error for 25-up, and UW got a free ball but a bad set forced Jones into the block for the Cal point. The Bears finally pulled it out after a long rally with a kill off the block to win it, 27-25, and level the match. The Huskies hit just .114 in the set while Cal was at .233.

Set three got off to a quick start as Cal shanked its first pass up over the net and Jones hammered it down for a kill. Tanner’s serve continued to put Cal in trouble and led to two more errors for a 3-0 lead before the Huskies misplaced a set. Scambray, who had moved back to outside hitter between sets, got her first kill for a 5-2 lead. Jones found a seam from the right, and then a McPherson serve was overpassed and Scambray jumped on it for 7-2 and Cal took the early timeout. Scambray then hunted down a Bear swing for a big rejection, and then McPherson floated a serve to the deep corner for an ace to keep the run going at 9-2 before Cal scored to stop the 5-0 Husky run. McPherson dove for a dig and Scambray bumped it over with a fist just to keep the rally going, but it fell for a point and an 11-3 edge. Schwan brought the fans to their feet by tracking down a bump set from McPherson from way off the court and killing it with authority for 13-4. The Dawgs posted two more points on the board on Scambray’s serve to force Cal’s final timeout at 15-4. Another Cal error and a slide kill from Bajema kept the Dawgs rolling along. Jones connected on a pipe set and then a block by Niece and Tanner got the Dawgs another point. A couple errors by Cal had the lead at 23-6. The Bears all of a sudden dug down and put a six point run on the Huskies to extend things, but Schwan finally snapped that with a kill for set point at 24-12, and then Schwan and Jones had a stuff on the next rally to end it, 25-12. The Huskies hit .500 for the set after being as high as .800 late in the proceedings, and Cal was in the negatives with eight kills but 10 errors. Jones killed all five of her swings in the set to hit 1.000.

The teams were even through the first four points of the fourth set, but Cal had a 3-0 run to take a 2-5 lead before Jones finished on the right. A miraculous get from McPherson kept a rally going and ended in a Cal net error for 4-6 as the teams continued going back and forth. Niece blasted through the block to pull UW within 7-9. Jones tipped over the block for a kill and then Tanner lined an ace off the defense to get the Dawgs back even at 10-10. Bajema put a quick set away for 13-14 Bears, and then the Dawgs tied it again with a stuff from Bajema and Tanner. The Huskies took their first lead of the set at 15-14 on a Cal error, but the Bears answered with two to retake the lead before Jones finished from the back row with a huge rocket for 16-up, and then Scambray served an ace as the lead swung back to UW. Cal spiked one wide on the next play for a two-point lead at 18-16 and then called for time. Scambray had a dig on the next rally and Tanner found Schwan who hit off the block and out long for the 19-16 point before Cal snapped the 4-0 Husky run with a kill. Schwan then ended a crucial rally with a big crosscourt swing, and then on the next point Tanner covered a tip and Scambray bumped to Schwan who got the block touch kill for 21-17 and the final Cal timeout was taken. In transition on the next point, Schwan pumped the brakes and dropped it in to get to 22-17. Cal served long and then had another attack fall long as the Huskies reached match point at 24-18. Cal saved one but then its next swing didn’t clear the net and the Huskies closed out the 25-19 victory. Washington was hot again in the fourth set hitting .412 with Schwan getting seven kills and hitting .429 and Jones putting away six more without a miss for a .545 mark while Scambray had seven digs.

Washington now has some time to rest up and hit the practice court before going down to meet the Oregon schools for the first time this year, starting with the Ducks next Friday, Oct. 7, at 8:00 p.m. in a nationally televised match on ESPNU.

Courtesy of University of Washington Athletics