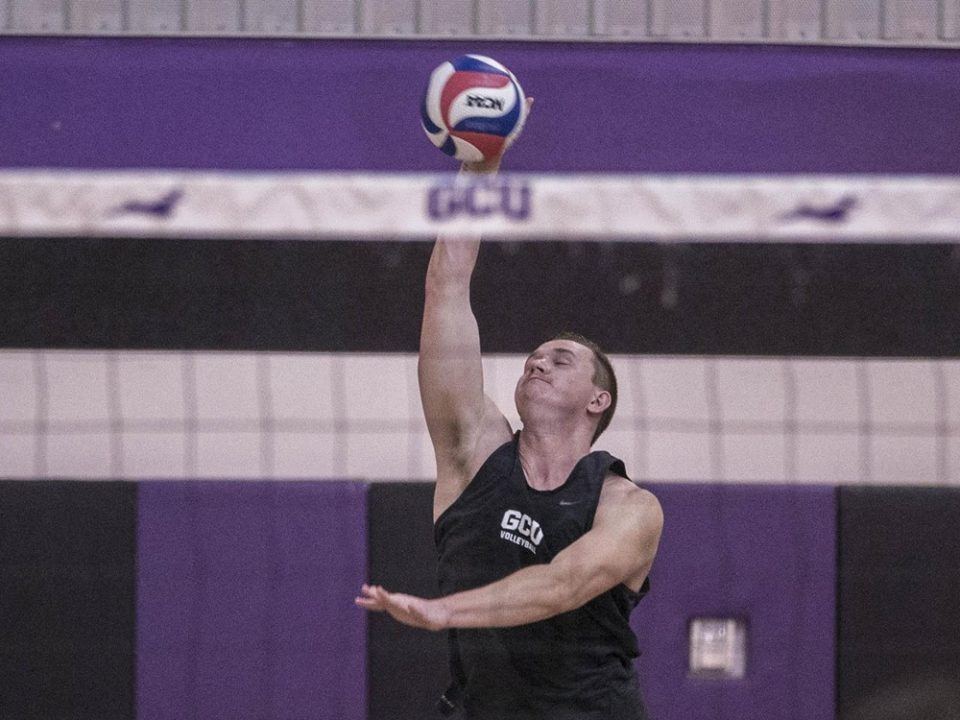 LA JOLLA, Calif. – The Grand Canyon men’s volleyball team defeated UC San Diego in four sets by scores of 29-27, 23-25, 25-16 and 25-23 on Saturday night. The Lopes earn their first victory of the year to improve to 1-1 on the season while the Tritons fall to 0-2. Middle blocker Ashton King had a huge night, leading the Lopes with 20 kills.

After a tough matchup with No. 8 UC Irvine on Friday night, the Lopes bounced back with a more efficient offensive attack. GCU recorded 56 total kills compared to 43 for the Tritons.

“You could tell that the team settled their nerves quicker tonight,” head coach Matt Werle noted. “Most of the match, excluding the third set, was very back and forth. Both teams had nice runs from the service line.”

“The difference tonight was our attack out of the middle of the court,” Werle added. “Ashton and Drake were such a threat that it started opening our pin attack late when Luke turned it on.”

Werle was impressed with a number of Lopes players during the match. Setters Michael Milstein and Zachary Melcher split duties and each effectively led the offense. Milstein recorded 28 assists and Melcher had 22. Libero Sky Engleman led the Lopes with 14 digs.

“Michael and Zach distributed the ball well tonight,” Werle said. “Ashton was phenomenal out of the middle. When a middle has 20 kills in a match, that is extremely impressive.”

Up next, the Lopes will travel to Manoa, Hawaii for a pair of matches on Wednesday, Jan. 11 and Friday, Jan. 13. Hawaii is currently 2-0 on the season.

With the defeat, UC San Diego dropped to 0-2 overall on the young season. Grand Canyon evened its record at 1-1. Both squads had begun the campaign with straight-set losses at No. 8 UC Irvine on Thursday and Friday, respectively.

The sides were meeting for the fourth successive season, with UCSD having grabbed the upper hand in two of those previous three matchups, though GCU had won the most recent, 3-0, also in La Jolla a year ago. The all-time series is now knotted at 3-3.

The Tritons won their first set of 2017, pulling out a 25-23 decision in the second. Three of the four frames were close, with a final margin of just two points to either side. UCSD never actually trailed in that game-two victory, though, leading from start to finish with just a pair of early ties at 3-3 and 4-4. The Tritons were up by as many as eight at 21-13 before withstanding a late GCU rally.

Freshman outside hitter Devin Pontigon (Oceanside/El Camino HS) became the first UCSD player to reach double figures in kills this season, putting down a career-high 14 after leading all players with nine in Irvine on Thursday.

UCSD attacked at just a .136 rate on the evening, to .254 by the visiting Lopes. The Tritons did, however, limit their service mistakes to just eight after finishing with more than double that at 17 in their opener.

Redshirt junior middle blocker Bryan Zhu (San Diego/Rancho Bernardo HS) and sophomore opposite Nathan Thalken provided huge lifts off the bench in the second and fourth frames, respectively. Zhu had two kills, a service ace and four total blocks in the second, while Thalken hit .455 (6-1-11) with a block assist in the fourth as UCSD tried desperately to extend the match.

Freshman Bailey Militar made his college debut, coming on at libero late in the first set when fellow rookie Ryan Lew was unable to continue. Redshirt freshman Xander Jimenez took over at libero for the second, third and fourth games, and collected nine digs. Junior setter Milosh Stojcic wound up with 37 assists and nine digs. Pontigon added seven digs, two aces and a pair of blocks to his kill total. Zhu got his hands to five total blocks. The Tritons laid claim to seven solo stuffs on the night.

After GCU tallied the match’s initial three points, junior opposite Tanner Syftestad gave UCSD its first lead of the contest at 6-5 on his only service ace. One of two triple blocks by the visitors, through Silbernagel, Turner and setter Michael Milstein, gave them a 13-9 lead. A solo denial by Ian Colbert, on Milstein, made it 16-12, with back-to-back aces by the senior outside hitter later cutting the deficit down to 18-16.

Shayne Beamer’s kill leveled matters at 21-21, with Syftestad’s big solo rejection of Turner in fact giving the home side one set point at 24-23 and forcing the Lopes’ second and final timeout. Following a Turner kill for 24-24, UCSD fended off three set points of its own, but was ultimately outlasted in the frame, 29-27.

Game two was largely the Zhu show. The San Diego native had a big dig to keep a rally alive for Syftestad’s kill and an 11-7 lead. He was later in on blocks on three successive Triton points, with two of the solo variety sandwiched around a combination stuff with Stojcic. Down 18-12, the Lopes called for time. A Zhu kill and another combo block with Syftestad on consecutive points made it a 20-13 bulge.

The third set was all GCU, including the other triple block from Silbernagel, Matthew Kinnebrew and Cullen Mosher for 17-12.

The fourth saw a huge stuff block by Colbert and Drew Sloane tie the score at 9-9, with an ensuing Pontigon ace pushing the Tritons ahead, 10-9. At the first GCU timeout, with UCSD up 12-9, Thalken had four kills on five swings without an error. The Sacramento product then teamed up with Sloane to deny Mosher for 13-9. Moments later, Sloane rejected Silbernagel on his own, and on the very next point, handled the overpass for a kill and 15-9 Triton advantage at the end of an 8-0 run.

The Lopes rallied from there, catching up at 18-18. Though UCSD tallied the next two, GCU nabbed three straight after that for a 21-20 edge and the Tritons’ second timeout. Following a ninth and final tie score at 21-21, a service error gave the Lopes the advantage for good, with the match ending on King’s career-best 20th kill.

UCSD hits the road next week at conference foes UC Santa Barbara and second-ranked UCLA on Friday, Jan. 13, and Saturday, Jan. 14, both at 7 p.m.