Grand Canyon Heads To MIVA Semifinals With Win Over McKendree 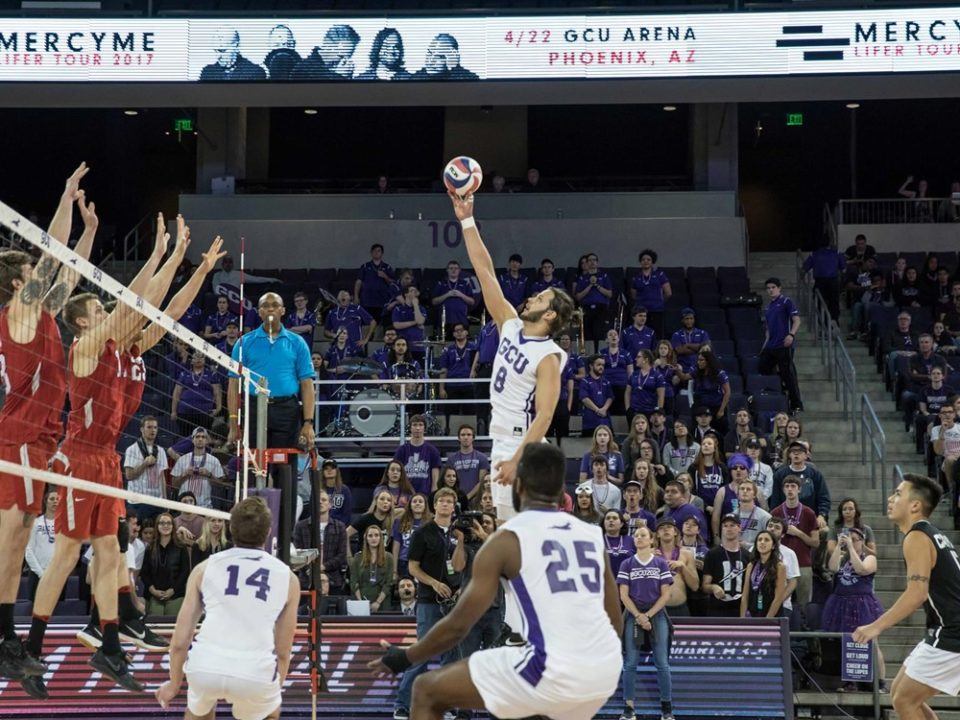 In their first home playoff match in program history, Grand Canyon defeated McKendree in four sets to move onto the MIVA semifinals what will be held on Wednesday, April 19. Current Photo via Grand Canyon Athletics

In their first home playoff match in program history, Grand Canyon defeated McKendree in four sets to move onto the MIVA semifinals what will be held on Wednesday, April 19.

The first set of the match started with a service ace from Michael Milstein, bolstering a five point lead for the Lopes that would keep them ahead of McKendree most of the set. Late, McKendree pulled within two, but a kill from Drake Silbernagel sealed the first set for the Lopes.

In the first, the Lopes hit .421 while holding McKendree to a lower .348 hitting percentage.

McKendree got off to a hot start in the second set, with a quick 7-4 lead. The Lopes easily fought off the lead to tie the set at eight all. It was a back and forth battle the remainder of the set, with McKendree coming out on top 25-23. The third set continued as a back and forth competition, but the Lopes had more control, staying ahead before taking the set 25-21.

Up 2-1 in the match, the Lopes came out strong with a 7-2 lead. Matthew Kinnebrew put down five of his kills in the fourth set helping the Lopes to keep McKendree out of reach by three points the entire set. The final point was decided by a service error by McKendree, giving Grand Canyon their first home playoff win ever.

The Lopes dominated in aces during the match, with 11 to McKendree’s four, while also putting down 14-8 blocks.

Leading the Grand Canyon offense was Matthew Kinnebrew with 15 kills, followed by Cullen Mosher with another 11. Mosher also contributed three aces, five blocks and two digs. Setter Michael Milstein was the only Lope to dish out an assist with 39. At the net, defensively, Ashton King led all players with eight blocks while Kinnebrew added another six. From the back court, Sky Engleman picked up seven digs.

The GCU men’s volleyball team earned the first home playoff win in school history on Saturday night, defeating the McKendree Bearcats in the first round of the MIVA Playoffs. The third-seeded Lopes won by scores of 25-22, 23-25, 25-21 and 25-19 to move their overall record to 18-10. Sixth seeded McKendree ends their season with an 11-19 mark.

“This was an exciting win tonight for our program,” head coach Matt Werle exclaimed. “Each guy on the court seemed to be great at one skill and it paid off. We had a lot of long rallies and junk fall in our favor which helped.”

The first set got off on the right foot with a service ace from Michael Milstein. Grand Canyon kept the Bearcats at arm’s distance for the entirety of the set, building modest leads as big as five points. After McKendree pulled within two points late in the game and forced a GCU timeout, the Lopes sealed the match with a lightly-tapped, perfectly-placed kill from Drake Silbernagel.

While five service errors for both sides balanced each other out, GCU used four service aces including two from Cody Williams. The Lopes hit .421 for the set.

McKendree got off to a hot start in the second, taking an early 7-4 lead. GCU quickly erased the lead to tie the score at eight, highlighted by a big solo block from Ashton King. Grand Canyon took its first lead when Matthew Kinnebrew and King teamed up for back-to-back blocks, prompting a Bearcats timeout. McKendree made effective use of its timeout, taking small leads of its own out of the break. The Lopes pulled as close as one point late, but McKendree scored its elusive 25th point.

The see-saw affair continued with Grand Canyon taking its turn to get out to a hot start. The Lopes used a pair of quick 3-0 spurts to take leads as big as four points at the mid-way point of the third. Kinnebrew finished off a set win for the Lopes with a kill.

While McKendree ended the third out-hitting the Lopes .350 – .318, Grand Canyon was strong in the serving game. With five more aces in the third, the Lopes tied their season high with 10 on the game. Cullen Mosher had two aces in the set.

In the decisive fourth set, it was all GCU. The Lopes got out to a hot start, forcing the Bearcats into a timeout down 7-2, and never looked back. Kinnebrew tallied five kills during the set and McKendree never got within three points of GCU’s lead. When a Bearcat attack sailed out of bounds on the final play, the Lopes cleared the bench to celebrate the first home playoff win of their careers.

Kinnebrew led the GCU offense with 15 kills for the night and Mosher followed with 11 kills. Silbernagel added eight kills and five blocks while King paced the Lopes in blocking with a total of eight. Libero Sky Engleman led GCU with seven digs and setter Milstein racked up 39 assists for the night.

In the next round of the MIVA Playoffs, GCU will face Lewis University on Wednesday, April 19. Lewis is the No. 2 seed in the tournament and the No. 7 team in the national rankings.

“Moving into next week, we will need to execute better as Lewis is a great team,” Werle noted. “It will be a hostile environment and the 15 guys traveling will really need to come together. Lewis has knocked us out year after year in the MIVA Tournament and we are hoping to stop that trend. The support from GCU and the Arizona volleyball community is greatly appreciated!”

The McKendree University men’s volleyball team fell 3-1 to No. 14 Grand Canyon University in the first round of the Midwestern Intercollegiate Volleyball Association Tournament Saturday night in Phoenix, AZ. The Bearcats fell by scores of 25-22, 23-25, 25-21, and 25-19.

McKendree entered the match as the No. 6 seed in the MIVA Tournament and were looking to upset a ranked opponent in the quarterfinal round for the second consecutive season after the Bearcats dropped No. 11 Ball State in the first round a season ago. The Antelopes earned the No. 3 in the tournament after with a record of 18-10 overall and 11-5 in the league.

Patterson, Rueter, Walker, and Wilcox all put down kills to open set one, but the Bearcats found themselves trailing 10-8. Rueter recorded two more kills as the set shifted to 15-13 before back to back kills from Walker and Patterson, but the Antelopes maintained a two point advantage at 17-15. Grand Canyon followed with four straight points on two kills and two aces before Patterson countered with two straight kills to spark a 3-0 run to cut the deficit to 21-18. The Antelopes forced set points at 24-20 as a kill from Schmidt and a block from Patterson and Walker were not enough to rally back with Grand Canyon earning set one by three points.

Wilcox notched a kill and an ace to help McKendree bolt ahead 6-3 in the second. A 3-0 from the Antelopes tied the set at eight, but another kill from Wilcox and a block from Fiduccia put the Bearcats back in front 11-9. The teams exchanged 3-0 spurts as the set shifted to 14-12 in favor of McKendree before a kill and a block from Schmidt extended the margin to three at 17-14. Walker tacked on a pair of kills to move the lead to 21-18, but Grand Canyon used a 3-1 run to trim the lead to one at 22-21. Sophomore outside hitter Will Frank (Moro, IL/Edwardsville) connected on an attack followed by a kill from Walker to force set point at 24-21 and the Bearcats were able to hold on to even the match at 1-1.

A kill from Patterson and a block from Schmidt helped open set three with a 3-1 lead for McKendree. Grand Canyon bounced back with a pair of 3-0 runs to take a 7-4 lead before adding on a third to go up 10-6. Walker and Schmidt tallied two kills each as the set rolled to 16-13 in favor of the Antelopes. A 3-1 burst moved Grand Canyon ahead 19-14, but Rueter followed with a kill before a block from Fiduccia to start a 4-1 run that slashed the lead to two at 20-18. The Antelopes kept the Bearcats at an arm’s length, using a 3-0 run to go in front 23-18 and withstood a 3-1 reply from McKendree to hold on in set three.

Grand Canyon took seven of the first nine points to start the fourth before a 3-0 run capped off on back to back aces from Walker brought the Bearcats back within two. Fiduccia contributed a pair of kills on a 4-2 run, but the Antelopes replied with three straight to go on top 14-9. Rueter and Schmidt put down kills to work McKendree back in the set at 20-17, but Grand Canyon would rally with a 5-1 spree to close out set four and earn the win.