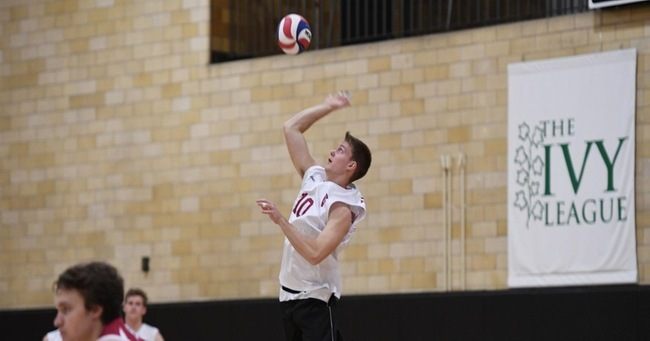 Hosting its last game before heading to the West Coast, the Harvard men’s volleyball team sunk Coker in three sets on Tuesday night at the Malkin Athletic Center. The final tallies read 25-20, 25-20, 25-17.
Sophomore middle blocker Spencer Scott paced the Crimson defense with 11 blocks, with support from Riley Moore, Jack Heavey, Matthew Ctvrtlik and Erik Johnsson, who earned three blocks each. Johnsson led the Crimson’s offense with 12 kills, his fourth-consecutive game with double-digit kills and eighth overall this season. Ctvrtlik registered 28 helpers, assisting the Crimson to a .311 attack percentage.
During the first set, Harvard and Coker swapped points between the first sixteen of the set, until the Crimson escaped ahead on a 7-3 run to bring the score up to 15-13. Three kills in a row for the Cobras would bring the visitor ahead 18-17, but the Crimson immediately fought back. Johnsson would go to earn four kills and one block in the final stretch, to end the set at 25-20.
Harvard burst out to an early 9-4 lead in the second set. Although the Cobras added two points with kills from Jackson Gilbert and Devion Whetstone, the Crimson would go on to a 7-3 run to lead Coker by its largest margin, 16-7. Jack Heavey, Kostich and White added three kills during the stanza, and a block from Scott and Ctvrtlik would secure the set at 25-20. The Crimson recorded its highest hitting percentage of the match at .455 percent.
The third stanza had equally balanced efforts from Harvard’s offense and defense. Scott and Jack Heavy put the pedal to the medal, posting a combined 10 stoppers against Coker. With f14 total blocks during the stanza, Harvard limited the Cobras to a -.188 hitting percentage, only allowing seven kills from the visitors. White and Johnsson registered four kills each to lead the Crimson’s offensive efforts.
Harvard will travel to the West Coast to a trio of ranked competitors during the week of March 11-18. Harvard will battle against No. 7 UCLA on March 11, No. 13 UC Santa Barbara on March 13 and No. 14 USC on March 15.

The Cobras will continue their road trip when they travel to NJIT on Thursday (Mar. 9) to take on the Highlanders at 6 p.m.