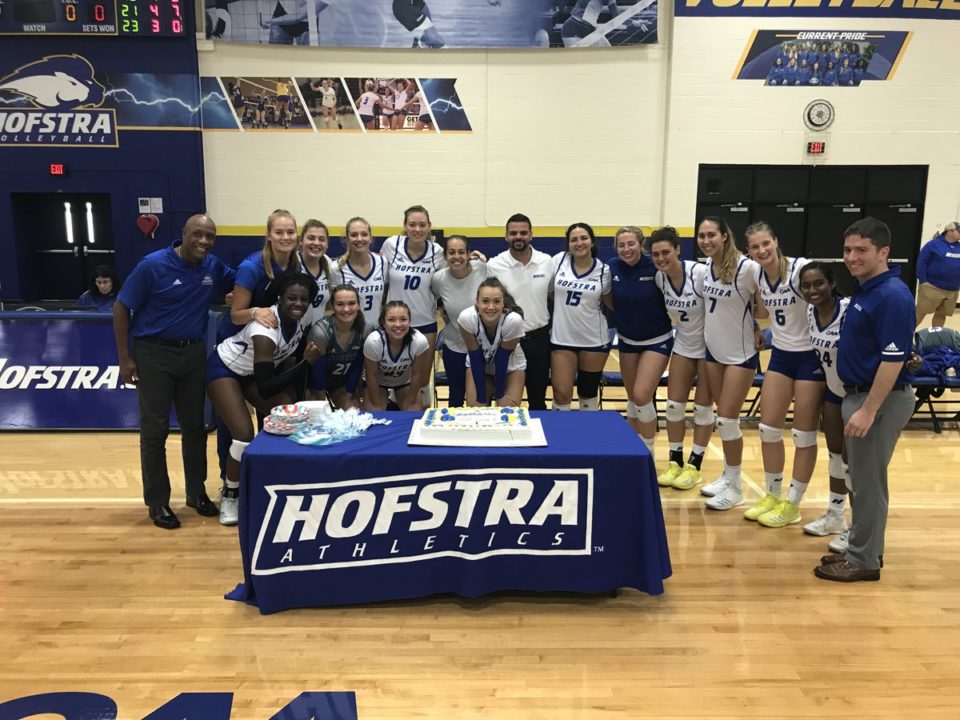 Now in her fifth season at the helm of the Pride, Mansur is 100-46 in her head coaching career. She is the second Hofstra Volleyball coach to reach at least 100 wins as legendary head coach Fran Kalafer won 590 matches during her 25-year Pride career (612 overall).

Junior Laura Masciullo posted a match-high 11 kills for Hofstra, while junior Luisa Sydlik dished out 33 assists and added a trio of service aces. Senior Michela Rucli continued her offensive onslaught this week as she posted seven kills on nine attempts for a .667 attack percentage. In the Pride’s three matches this week, Rucli had 26 kills on 35 attempts with just one error for a .714 hitting percentage. Sophomore Ana Martinovic had a solid match with eight kills and five digs, while sophomore Ivania Ortiz added five kills and nine digs.

Both squads had trouble finding their flow offensively in the opening stanza with the Pride earning a narrow four-point win after holding the Tribe to a .069 attack percentage in the first set. The Pride would take a commanding lead in the match as they posted a .531 hitting percentage in the second set to make it a 2-0 set lead in the contest. Hofstra didn’t allow William & Mary a chance to rally in the third set as the Pride played its stingiest defense of the match and held the visitors to a negative hitting percentage.

Hofstra returns to action on Friday, October 5 when it heads south to face Charleston at 7 p.m.

NOTES
– Hofstra is now 26-18 all-time against William & Mary. The Pride has won 10 straight in the series.
– With three straight CAA wins in sweeps, it marks the first time Hofstra has won three straight CAA contests in sweeps since defeating Georgia State, UNCW and George Mason all in sweeps from October 26-November 9, 2012.
– Masciullo has reached double figures in kills in 11 straight matches.
– Sydlik has reached double figures in assists in 50 straight matches.