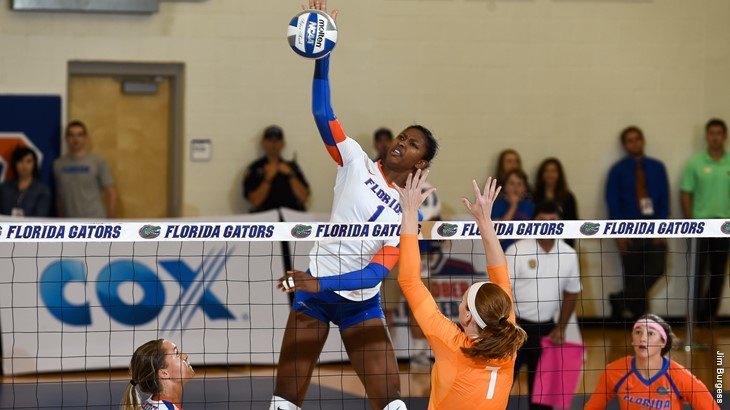 Alex Holston notched 24 kills in just 3 sets as Florida swept Arkansas and clinched a share of the SEC title.

Holston’s 24 kills ties a school record for a 3-set match, joining a Jenny Manz effort from 1996. She was joined by teammates Rhamat Alhassan (12), Rachael Kramer (10) and Carli Snyder (10) in double-digit kills in what was a kill-fest for the Gators.

Florida improved to 16-2 in the SEC and will share the conference title with Missouri. The Tigers earn the conference’s automatic NCAA bid based on the head-to-head tiebreaker, but both teams are very likely in to the NCAA tournament with top-16 seeds. The NCAA Selection Show is this evening on ESPNU – Volleymob will be providing live coverage both on Twitter (@Volleymob) and on the live site.

Arkansas couldn’t pull out a 10th win, but did get 14 kills from Savannah Voelzke in likely her last career match. Freshman Rachel Rippee provided some hope for the future with 36 assists and 10 digs.

Florida’s 22 SEC titles are tied for the 10th-most in conference history in any sport, regardless of gender. The Gators’ 22 league titles are also the fourth-most by any SEC team, regardless of sport or gender, since 1979, the first season the conference crowned a volleyball champion.

With a win this evening, Missouri, which enters its 7:30 p.m. ET match with Tennessee at 15-2 in league play, can make this the first split SEC title since 2004.

Three-time All-American right side Alex Holston led the Gators with a season-high 24 kills, tying Jenny Manz (Oct. 13, 1996) for the most by a UF player in a three set match since at least 1996. It was also just the 15th time this season any Division I player tallied 24-plus kills in a three-set match.

Holston notched 11 kills in her first 14 attacks, and went on to total 14 in the opening set alone. The four-time All-SEC honoree racked up another seven kills on 11 attacks in the second set, and added three more on her only three attacks in the closing set.

Redshirt sophomore setter Allie Monserez set up nearly all of UF’s 61 kills, amassing 52 assists, the highest three-set total by a Gator since Angie McGinnis had 52 in a sweep of Oklahoma back on Nov. 30, 2007.

QUOTES FROM THE GATORS
Head coach Mary Wise on the team’s victory…
“From afar it will look like a 3-0 win, but anybody who saw it knows it was much closer than that. A senior-laden Arkansas team played very well. Fortunately, we got an All-American performance from Alex Holston to pull out this one.”

UP NEXT
The Gators will learn their NCAA Tournament First Round matchup Sunday (Nov. 27) night at 9 p.m. ET, when the 64-team field is revealed during the NCAA Tournament Selection Show on ESPNU. Head coach Mary Wise is scheduled to make an appearance in the second half of the hour-long broadcast.

FAYETTEVILLE, Ark. – Playing its season finale, the University of Arkansas volleyball team saved eight points in the first two sets against No. 9 Florida before the Gators came away with the straight-set victory at Barnhill Arena. Savannah Voelzke capped her Razorback career with a team-high 14 kills while freshman setter Rachel Rippee registered her seventh double-double with 36 assists and 10 digs.

Prior to the match, the Razorbacks recognized the senior class of Voelzke, Barbara Dapic, Danielle Harbin, Breana Jones, Ana Sofia Jusino and Adrien Wohlschlaeger. Arkansas finishes the season with a 9-21 overall record and 7-11 mark in SEC play, having won six of their last nine matches down the stretch.

With seven kills in the match, Harbin increased her season total to 464 which stands as the 14th-highest single-season total in program history. Her 4.22 kills per set average ranks ninth on Arkansas’ all-time season list, a figure that also projects as a top-40 national mark for the year.

In the back-and-forth first set, the Razorbacks saved six set points and had three chances of their own to win the opener. Florida led by as many as four points early in the set but a Jones-Voelzke tandem block evened the score at 15-all, one of the 18 ties in the first frame. Arkansas had its third set point at 32-21 but the visitors responded with three-straight points to secure the 1-0 match lead. It was the Razorbacks’ longest set (points played) of the season.

After another even start in the second, Florida used a surge to take a 22-19 lead and force an Arkansas timeout. However, Voelzke and Jusino capped a 3-0 run with a block to tie the score at 22-all. The Razorbacks went on to save two more set points with a Dapic kill and Florida attack error but the Gators responded with the next two points to win the second. Early in the third, Florida used a 6-2 run to create a cushion on the scoreboard on its way to the win in the regular-season finale for both teams.