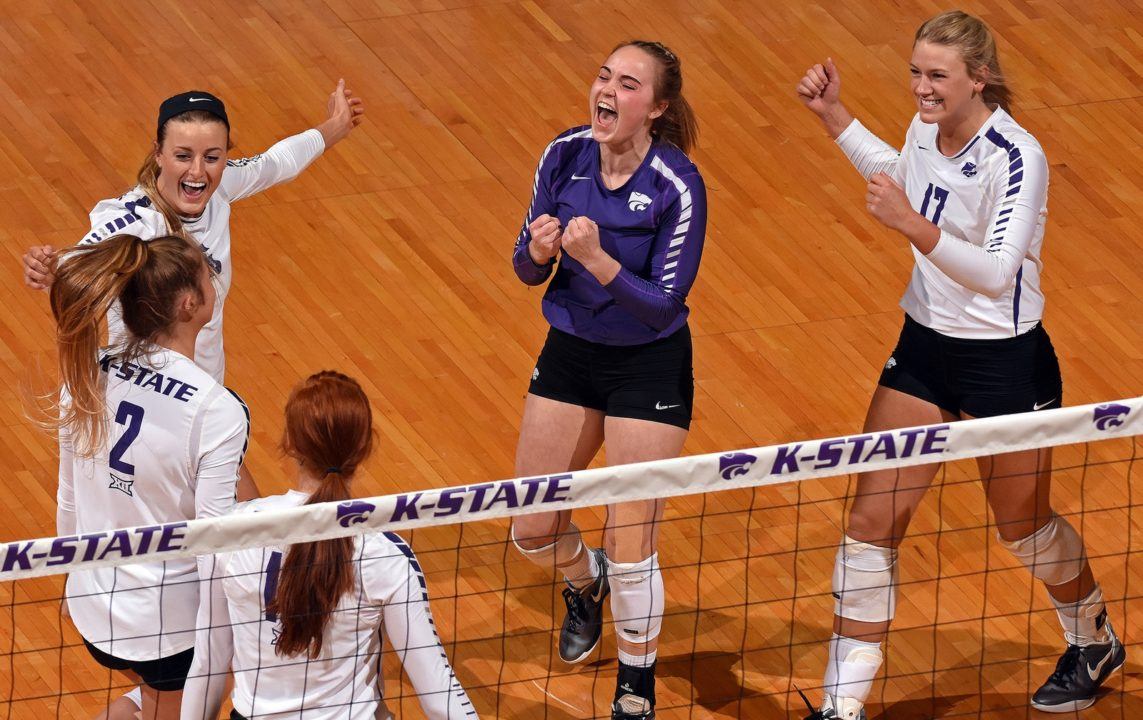 MANHATTAN, Kan. – On Senior Night, it was only fitting that the six-member senior class led the Kansas State volleyball team to a straight-set victory (25-16, 25-21, 25-17) over Texas Tech Saturday night at Ahearn Field House.

It was a senior that led the team in each major statistical category in K-State’s 20th win of the season. Outside hitter Brooke Sassin led in kills (12), middle blocker Katie Reininger led in hitting percentage (.667), libero Kersten Kober in digs (12) and setter Katie Brand in both assists (39) and blocks (7).

“No better way to go out,” Sassin said after the match. “It’s awesome to go out this way and look back and see how much I’ve grown as a player.”

“When I think about that core group of seniors,” head coach Suzie Fritz said. “It’s hard to describe how hard they work.”

“Our block is where it started,” said Brand. “Our middles, both Elle [Sandbothe] and [Katie] Reininger, did a great job of using their inside hand to close off the angles.

“Defense was something we focused on coming in,” Brand added.

K-State jumped out to an early 7-2 lead in the opening set and never looked back, leading throughout. Five Wildcats picked up multiple kills in the frame and as a team hit .393 (15k-4e-28ta). Three separate runs of at least four straight points scored by the Cats aided the 25-16 set victory.

Late in the second set and tied at 20, K-State closed the set on a 5-1 run to take a 2-0 match lead. Again, five Cats had multiple kills while the defense held Texas Tech to a .027 (10k-9e-37ta) attacking efficiency. Brand, Reininger along with junior Bryna Vogel each tallied a pair of blocks in the set.

K-State trailed only once in the final set as Brand, Reininger and Sassin recorded the final six kills to close out the Wildcats’ second sweep of the Red Raiders this season. Sassin had six of her match-high 12 kills in the game.

“At this point of the season, it’s just about trying to win and advance,” Fritz added. “Now, it’s genuinely about winning. With a group like that, it’s their show now, I am just turning it over to them and along for the ride.”

At 9-7 in conference play, K-State finishes the regular season in a tie for fourth place in the Big 12 for the second straight season. It is the ninth top-four finish for the Cats under coach Fritz.

K-State seeks its third straight selection into the NCAA Tournament and will await its fate as the NCAA Selection show airs on ESPNU at 8 p.m. CT Sunday night. The Wildcats have qualified for the postseason 11 times under coach Fritz.

·         K-State finishes in a tie for fourth in the Big 12 standings for the second straight season.

“Our effort was pretty good,” Graystone said. “We just got stuck in a couple of rotations. We got in those last two rotations, and it’s been hard for us to sideout without Sarah (Redding) in the front row. I’m happy that Lauren (Douglass) played so well in her last match and that we were able to get Victoria (Hinneburg) some playing time. Those three seniors have been so good with helping our transition to Tech.”

Despite winning two more sets in Big 12 play this season than in 2015, the Red Raiders (10-21, 0-16) wrap up their first year under the direction of head coach Tony Graystone winless in conference play.

“Anybody who followed us all year would agree in how much improvement we made in the second half of the year,” Graystone said. “There’s an element of being able to finish that we have to get, and then we have to look at each position and get a little bit better. Some of these young girls have had that year now and we expect them to grow. There’s still a lot of work to do, but I’m encouraged with what we saw this year.”

Senior Lauren Douglass led the team with nine kills at a .333 clip while adding two blocks. The Flower Mound native wraps up her storied career second in the Texas Tech record books with a .343 career hitting percentage. Senior Marguerite Grubb recorded 23 assists in her final game as a Red Raider, while sophomore libero Reyn Akiu tallied 12 digs to lead the team.

Kansas State took an early 7-2 lead in the first and held the lead throughout the frame, outhitting the Red Raiders .393 to .111 to secure the set.

The Red Raiders got off to a strong start in the second set behind an early kill from freshman Chandler Atwood and a block from Douglass and Grubb to help capture a 5-3 lead. Tech remained in front at 17-15 before the Wildcats stole the lead with a 3-0 run to go up 18-17. Tech took the lead back at 20-19 off a solo block from sophomore Sarah Redding, but the Wildcats would close on a 6-1 spurt to take a 2-0 lead in the match. The Red Raiders held the Wildcats to .167 hitting for the frame, but hit just .027 themselves.

Texas Tech battled in the third set and pulled to within 16-19, but the Wildcats would again put together a 6-1 run to close the set and take the victory.