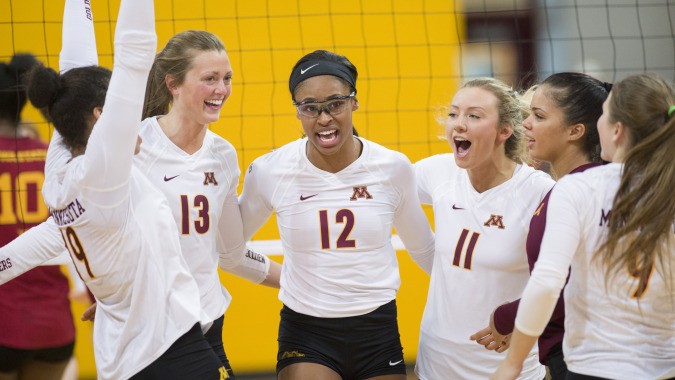 High school sophomore Rachel Kilkelly has verbally commited to the University of Minnesota Class of 2023. The 5’9″ outside hitter and libero... Stock Photo via Christopher Mitchell / SportShotPhoto.com

High school sophomore Rachel Kilkelly has verbally commited to the University of Minnesota Class of 2023. The 5’9″ outside hitter and libero plays for the Northern Lights Volleyball club and Shakopee High School in the southwestern suburbs of Minneapolis.

Kilkelly has an 86″ (218cm) standing reach, blocks at 102″ (259cm), and hits at 114″ (290cm). While a high hitting point makes up somewhat for her height, the only three players on Minnesota’s current roster that are under 5’11” are libero/defensive specialists, and so barring a late growth spurt, that’s where Kilkelly projects as a collegian.

In spite of being in just her 2nd year of high school, Kilkelly is in her 3rd season of varsity volleyball under Minnesota high school rules that allow limited participation by 8th graders in varsity athletics. Even as an 8th grader in 2014, she was named SSC All-Conference Honorable Mention. The next year, she was the only player named to the conference’s All-Conference First Team, an honor she received again in 2016 as a sophomore.

Minnesota has brought in a Libero in each of their last three recruiting classes, including class of 2017s Lauren Litzau, a Wisconsin Second-Team All-State libero who enrolled early this semester before her first full season in the fall.