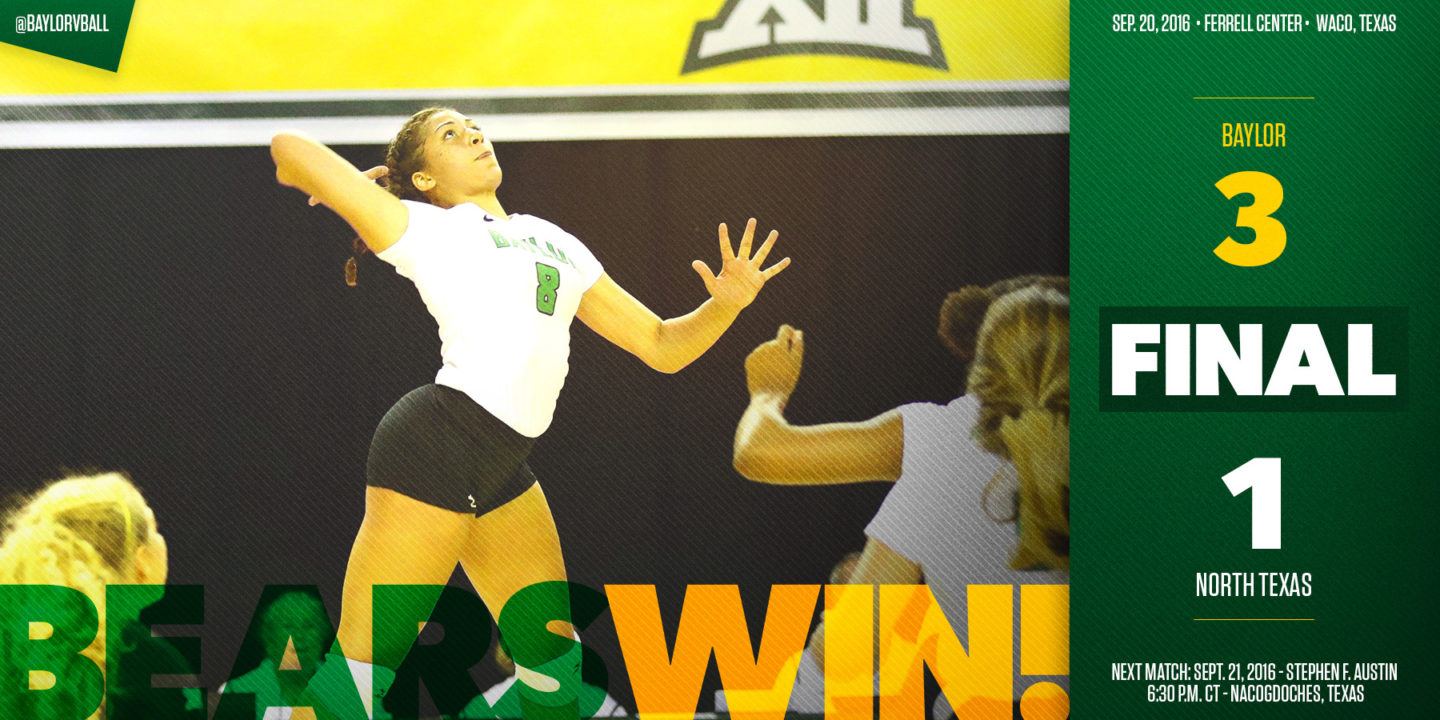 Baylor posted a season-high 14 blocks while Jana Brusker picked up 26 digs for a stellar defense performance by the Bears. Katie Staiger recorded a team high 17 kills for the match.

It pushes Baylor’s match-winning streak to seven matches, dating back to Sept. 9. The Bears were led offensively by redshirt junior Katie Staiger and sophomore Aniah Philo, posting 17 and 12 kills, respectively.

Defensively, the Bears recorded a season-high 14 blocks against the Mean Green, surpassing their performance against Virginia on Sept. 16 (13). Junior Jana Brusek added 26 digs in the four-set win.

Baylor started out strong, leading with its block. Sophomore Ashley Fritcher added a kill to push BU’s lead to 18-10, and sophomore Aniah Philo added five kills in the first set to lead Baylor to the 25-14 victory.

BU was crippled by seven attack and three service errors, falling behind early in set three. The Bears erased two set points and even had a match point of their own, but back-to-back kills by UNT ended the third frame, 28-26.

The Bears jumped out ahead to start set four, leading 7-5 early after a kill from junior Camryn Freiberg. BU then fell behind after struggling with service reception, but redshirt junior Katie Staiger’s nine kills helped Baylor put away the fourth set over UNT, 25-23.

HIGHLIGHTS
• Katie Staiger added nine of her 17 kills in the fourth set, pushing BU to the 25-23 win.
• All Baylor players saw playing time in the match for the first time this season, with all 14 active players making an appearance.
• Aniah Philo (12 kills, 12 digs) and Morgan Reed (36 assists, 10 digs) each posted double-doubles against the Mean Green.
• Baylor’s current seven-match winning streak dates back to Sept. 9 where BU swept Little Rock and Florida A&M on the road.

QUOTE OF THE MATCH
“We started out great both of the first two sets. We got to get some people in and see what they could do. We definitely fell out of rhythm over the course of the match. We weren’t very terminal with our attacking. The lesson is, once you’re in the flow, you’ve got to fight hard to stay there.”
-Baylor head coach Ryan McGuyre

STAT OF THE MATCH
14 – the new season-high block performance by Baylor.

WHAT’S NEXT
Baylor plays SFA in its final nonconference tune-up before Big 12 play Wednesday in Nacogdoches. First serve is slated for a 6:30 p.m. start and will air on ESPN3.

North Texas (6-9) struggled to find its offensive rhythm and was overpowered by Baylor’s blocking game early in the match. The Mean Green’s offense couldn’t get in sync, as Baylor continuously blocked their shots or forced the Mean Green into tough shots. Baylor had 11 blocks and forced 19 attack errors in the first two sets, en route to 25-14 and 25-18 victories and a 2-0 lead.

“We need to come out of the gates stronger and be ready to go from point one,” head coach Andrew Palileo said. “Baylor did a good job at blocking us in the first two sets, but we worked around it after that. We will make our adjustments and get ready to go on Friday.”

The Mean Green came out strong in set three, taking a 9-4 lead early, and would extend their lead to what looked to be 18-10, but Baylor challenged whether the ball hit the floor before the dig occurred and won, reverting the score to 17-11 in favor of the Mean Green.

The Bears went on a 4-0 run lead after the challenge, cutting the lead to 17-15, but North Texas continued to maintain its advantage until Baylor took its first lead of the set at 26-25. A double-block by Alexis Wright and Jordyn Williams tied the set at 26, and the Mean Green secured a 28-26 victory in a thrilling set three.

Baylor gained some of the momentum back, starting set four on a 5-2 run, but North Texas would not go away quietly, rallying to take a 10-8 lead after an ace by BrynCaitlin Walker and a Baylor attack error. Baylor took advantage late at 24-21, and secured a 25-23 victory on back-to-back kills by BIG 12 kills leader Katie Staiger. The win moves Baylor’s record to 11-4.

• With her fourth kill of the match, Amanda Chamberlain became a member of the 500 kills club
• Head coach Andrew Palileo used his first challenge of the season, but was unsuccessful
• Baylor was successful on both of its challenges, resulting in a point being taken away from the Mean Green on each one and shifting the momentum back in its favor
• Alex Janak posted a season-high 18 assists in the match
• North Texas was out-hit .173 to .058
• The Mean Green continued their strong serving, tallying eight aces in the match

Next Up For The Mean Green

The Mean Green begins Conference USA play on Fri., Sept. 23, at 7 p.m. versus Southern Miss before finishing the week versus Florida International on Sun., Sept. 25, at 1 p.m. Both matches will be played at the North Texas Volleyball Center. A tailgate is scheduled for 6 p.m. before the match on Friday.