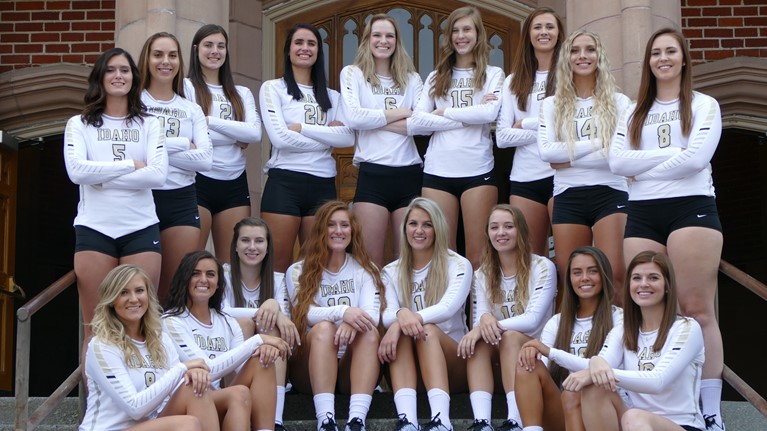 Idaho volleyball returned to Memorial Gym on Thursday and picked up its ninth sweep of the season. Current Photo via Idaho Athletics

Idaho volleyball returned to Memorial Gym on Thursday and picked up its ninth sweep of the season. The Vandals ended Northern Colorado’s night early, 25-16, 25-13, 25-20. The win secured Idaho’s spot in the Big Sky Tournament.

“I can honestly say that was probably the best we have played since preseason,” head coach Debbie Buchanan stated. “The overall offense and defense—the flow and energy of the game. Those first two sets were pretty flawless. We had five errors in each, but even when we got behind in game three we picked it up and pushed some runs. Tonight I thought was a pretty impressive night for us.”

Idaho improved to 9-4 in Big Sky play and 14-10 overall. Idaho will be making its 13th consecutive conference postseason tournament appearance. It will be Idaho’s fourth straight Big Sky Tournament berth, making the tournament every year since rejoining the league in 2014.

“It was a really good win for us,” junior Sarah Sharp said following the match. “I mean we played probably the best we have this season. It was nice because it felt really selfless on the court. Everyone was giving to each other and cheering each other on. It was really fun tonight.”

The Silver and Gold got hot early in the first set and kept the momentum rolling through the second. The Vandals opened the match on an 11-1 run, gaining their largest lead of the set. Idaho hit .293 in the frame, led by Sharp and her six kills. Three Vandals hit over .300 percent in the set. Reece Carmanswung .500 percent with three kills, while Sharp and Kaela Straw both hit .333 on the attack.

The Vandals allowed Northern Colorado little room for error on the night, continuing its strong play in the second set. Senior Torrin Crawford started the set off with a kill, helping Idaho to a 9-3 start to the set. Kills from Crawford, Haylee Mathis and Straw along with dominate serving from Maura Donovan pushed Idaho a commanding 16-4 lead. Carman closed out the set, finishing off a 5-1 run to take a 2-0 lead into the break.

UNC (13-13, 6-7 BSC) flipped the script on Idaho in the third. The Bears jumped out to an 8-2 lead before Idaho could string together some points. The Bear lead did not last long as Idaho got three consecutive kills from Sharp to tie the match at 12. A Straw kill tied the match again at 17 and an ace from Donovan gave Idaho the 18-17 advantage. The Vandals would not relinquish the lead, closing out the night with a block from Carman and DeVonne Ryter.

Sharp led the match with 18 kills, one shy of her season best. Carman hit a team-best .450 percent on the night, closing the match with 10 kills. Straw recorded eight kills to go with a .318 attack percentage.

“Our defense did amazing tonight,” Sharp added. “Delaney and everyone honestly. They were just getting ups that were a little unexpected and we got to put another ball down because of it.”

The win gave Idaho its ninth sweep of the season, the most since recording 10 in 2004.

Idaho will take on North Dakota on Saturday. It will be the team’s final home match of the season. The team will honor seniors Torrin Crawford, Casey Kline and Hobart following the match.