The schedule for the 2017 FIVB Men's Club World Championships has been released with action set to begin on December 12 in Poland. Current Photo via FIVB

The schedule for the 2017 FIVB Men’s Club World Championships has been released with action set to begin on December 12 in Poland. The 2016 champion of the event, Sada Cruzeiro, will attempt to win back-to-back titles as they open with Italian champions Cucine Lube Civitanova.

The eight teams in the competition were split up into two pools of four teams that will go through three days of pool play matches. The top two teams from each pool will move on to the semifinals on December 16 followed by the finals on December 17. 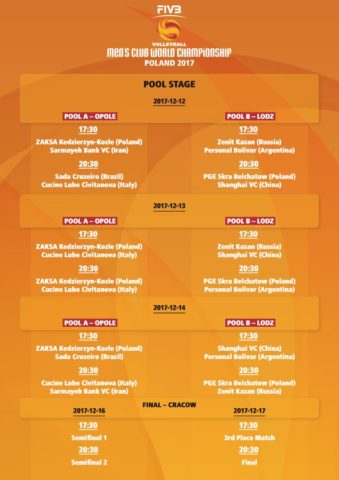