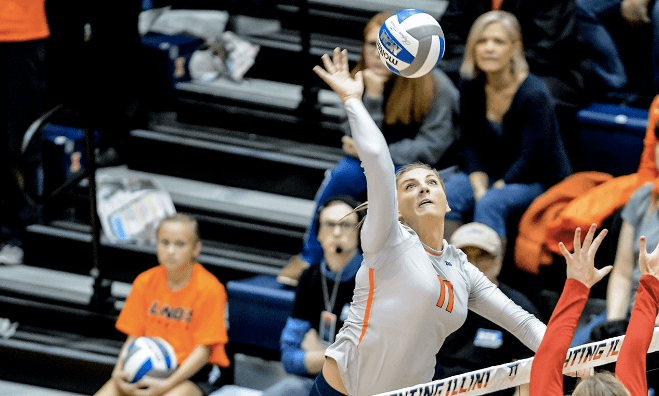 Illinois volleyball head coach Kevin Hambly has announced on Friday, Oct. 7 that senior outside hitter Katie Roustio will transition to a student assistant coach for the remainder of the Fighting Illini volleyball season.

Roustio, who will graduate in December with a degree in communication, had surgery on her left knee in the spring and reinjured the same knee during preseason workouts. She will now switch her focus to helping and assisting the Illini from the bench as a student assistant.

“I am heartbroken for Katie; she has worked hard at her game and was playing well before her knee injury,” said Hambly. “Every player should be able to end their career on their own terms. The good thing about Katie is she knows that volleyball is not who she is, it is what she does. Her transition from being an athlete to the work force will be smooth and she is going to be great at whatever she chooses to in the future.”

“We also do not lose her personality and enthusiasm in the gym and around the team. She will still have a tremendous impact on our program throughout her senior year.”

Roustio appeared in three matches this season and saw action in 41 matches during her Illini career, totaling 159.5 points with 142 kills, 30 blocks, and 23 digs and has been a part of three-straight NCAA Sweet 16 appearances.