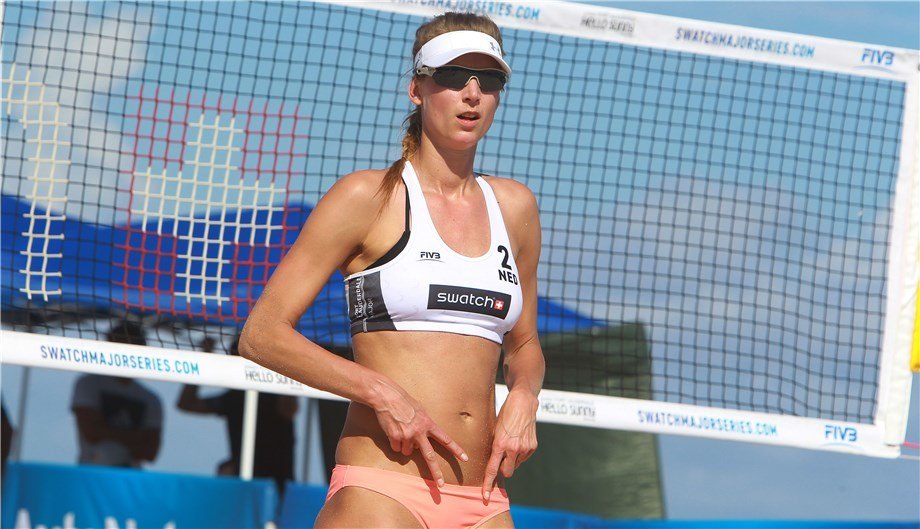 After spending 15 years with the Dutch National Women's team, Manon Nummerdor-Flier traded playing on an indoor court for the beach. Current Photo via FIVB

After spending 15 years with the Dutch National Women’s team, Manon Nummerdor-Flier traded playing on an indoor court for the beach.

Nummerdor-Flier was approached by two-time Olympian Marleen Van Iersel last year about forming a team, where she took little time to answer back yes. Originally, Nummerdor-Flier had every intention of finding an indoor club to play with in Europe to resume her career following the birth of her daughter, Milou.

“Our daughter had been born for only three or four months when Marleen called me. We had to think about it, but not for long. When a player like her invites you to play, you can’t say no. I don’t think I would have made the switch with any other partner. I knew it was a great chance to have another sports career,” said Nummerdor-Flier.

At the age of 32, she made her debut on the sand at the Fort Lauderdale Major Qualification round. The pair faced Japanese duo Azusa Futami and Akiko Hasegawa, where Nummerdor-Flier/Van Iersel quickly showed off their dominance. The pair defeated the Japanese in a straight two set decision 2-0, (21-18, 21-13).

“I’ve never been so nervous, to be honest. Later I calmed down, but I was very nervous in the beginning,” said Nummerdor-Flier.

Her partner expressed some gratitude for her play by saying, “I think she did really well for a first match. She’s coming from indoor and practiced for just two months and only one week outside. She learns really fast and will get a lot better, but it is difficult to say how far she can get.”

Despite the confidence from Van Iersel, Nummerdor-Flier still thinks she has much work to improve upon and is not fully convinced she can be a ‘good’ beach volleyball player.

With their win over the Japanese pair, Nummerdor-Flier and Van Iersel were cast into Pool A of the main draw, where they are set to face multi-time Olympic medalists from the United States in Kerri Walsh-Jennings and April Ross, Brazil’s Barbara Seixas and Fernanda Alves and Finland’s Annina Parkkinen and Taru Lahti-Liukkonen.