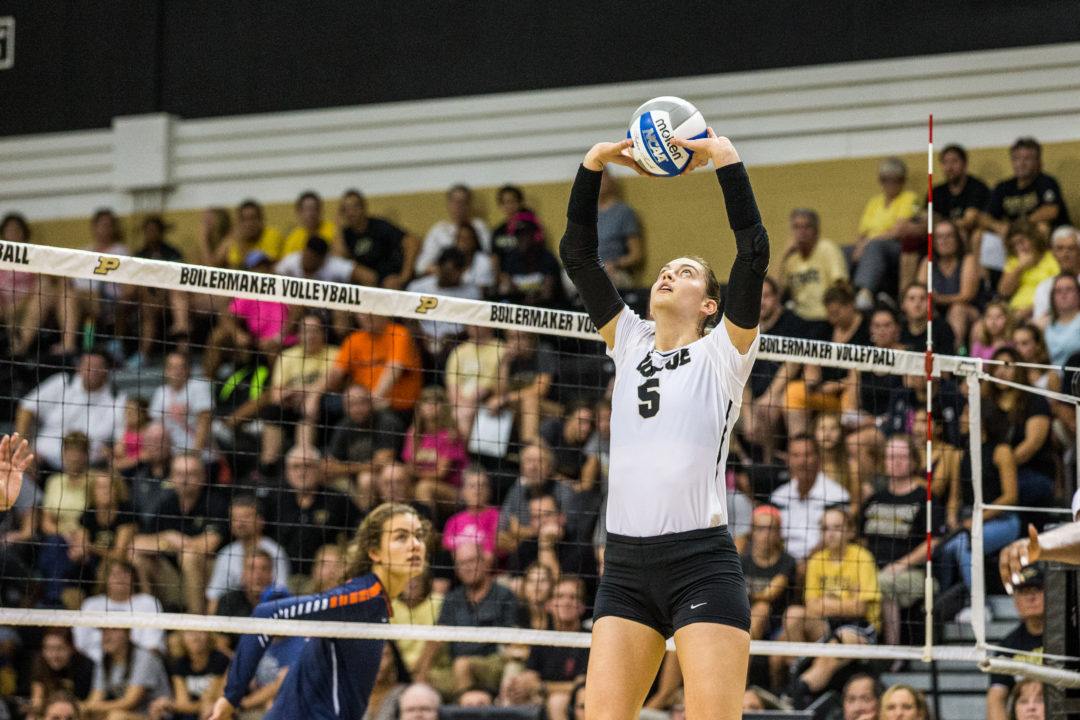 Purdue setter Ashley Evans shares about the strain and rewards of the preseason, the team's five newcomers and its motto of #RiseHigher.  Current Photo via Purdue Athletics

Purdue setter Ashley Evans shares about the strain and rewards of the preseason, the team’s five newcomers and its motto of #RiseHigher. The two-time Academic All-America honoree dished out 10.88 assists per set, ranking 38th nationally, while also chipping in 2.07 digs per set and a team-leading 29 aces in 2016. The Liberty Township, Ohio, native tallied a triple double and 10 double doubles, while guiding Purdue to a team hitting percent of .250 or better 19 times.

The Boilermakers are ranked 25th in the Preseason AVCA Poll after posting a 19-14 record and advancing to the NCAA Tournament second round in 2016. Purdue returns six of its seven starters, including AVCA All-Region and All-Big Ten honoree Danielle Cuttino,  and adds four freshmen and a transfer to the mix. The team got in a little extra practice time care of a European Tour in May, while three players – Evans, Brooke Peters and Sherridan Atkinson – got extra reps as part of the USA Volleyball Collegiate National team – Minneapolis program.

The Boilermakers, which are set to face 11 NCAA Tournament teams in 2017, will kick off their season at home, playing Alabama, Cleveland State and Oral Roberts in the Mortar Board Premier.

Get Evans’ take on the first several days of practice below.

Purdue Volleyball has officially completed week one of the preseason! As the majority of teams would agree, preseason is quite taxing from a physical, mental and emotional standpoint. However, stepping back and considering the big picture, some may consider preseason as two of the best weeks of the year, simply because our responsibilities are very straight forward: eat, sleep and breathe volleyball without the stress of academics. Not a bad combination!

Taking a quick inside-look into our preseason, the first week consisted of a multitude of activities. We reported on Monday and started off with various team meetings with compliance, nutritionists, sports psychologists, and coaches, followed by media day and photo shoots, and we finished up with a team dinner to kick off the year. Official practice began Tuesday morning. Our practice plan is well-structured with position-specific training, defense and serving from 9-11:30 a.m. in the morning, and team-play practice spans from 3-6 p.m. in the afternoon with an hour of weights in-between for three of the five weekdays.

Overall, we are excited about the first week of training. Two highlights of the first week have been our newcomers and the extremely high level of play. Our freshmen class and transfer have been outstanding. The five of them in total bring great competitive energy, focus and high character to our program. Additionally, they bring a lot of depth to each position on the floor, something we lacked last season and that we will benefit from this year. With more depth, there is healthy competition to be on the floor, resulting in a greater competitive drive from all 15 team members.

The week finished with a day at our coach’s lake house for team bonding and the first of two intrasquad scrimmages on Saturday. Roughly 500 fans showed up for the scrimmage, and we are still debating as to whether they came to see our team for the first time since spring or to get a taste of the new and improved Holloway Gymnasium which now features air conditioning! It’s probably a combination of both!

The journey continues as week two starts Monday. Every practice and every rep matters, and we are working to get one percent better each day as we prepare for four competitive pre-conference weekends before the brutal Big Ten season commences. Our motto for the year is #RiseHigher as we are striving to be high character, genuine and competitive teammates that work harder and are more committed than ever before. We have the pieces to be great, but putting those pieces together and uniting as one unit is the process that we are falling in love with. Here’s to week two and the 2017 season!

Cheers from Purdue Volleyball! Boiler Up!