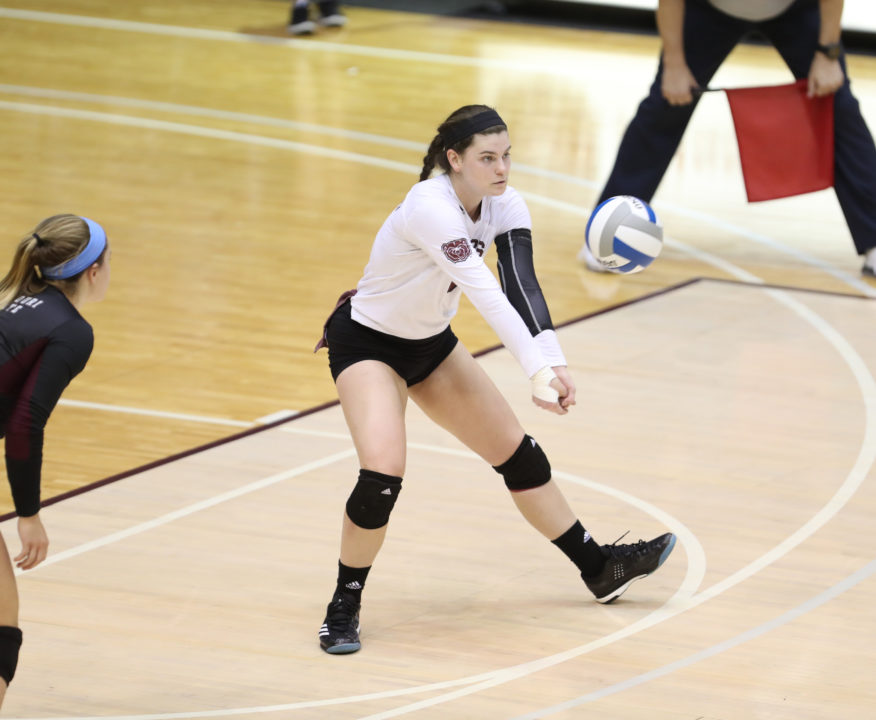 The VolleyMob All-American and 2017 Missouri Valley Conference Libero of the Year ranks second in career digs among active NCAA players (1,883). She has helped lead Missouri State to back to back regular season league titles and a 34-match conference win streak. The Bears have made three straight NCAA Tournament appearances and boast the nation’s longest active road winning streak at 22 matches.

Missouri State, which posted a 28-6 record and perfect 18-0 MVC mark in 2018, was picked to finish second in the league’s preseason coaches poll. Butters was one of seven MVC preseason all-conference selections alongside junior outside hitter Aubrey Cheffey.

The Bears are in the midst of preseason, and let me just say what an experience it has been thus far! We graduated four crucial seniors in the class of 2017, so it is a great opportunity for lots of our underclassmen and returners to step up and show off their abilities on and off the court. We have a large freshman class, with one redshirt freshman and eight incoming freshman. They have been doing a great job throughout preseason adjusting to the fast-paced transition from high school to college volleyball. It is only week two of playing with these new faces in the gym, and our freshman class is showing the team that they came to compete. I am excited to see how they progress throughout the rest of preseason and as we dive deeper into the semester ahead.

Our practices have been full of energy and focus throughout two-a-days. We work on individual skill work and optimizing reps in the mornings, and save rotation work and competition for the afternoon sessions. Our coaches preach the importance of patience and to trust the process as we all get more and more comfortable playing alongside each other. We have an amazing winning tradition here at Missouri State, and it shows during all of the hard work we are putting in on the court. Our new coaching staff is doing a great job of interacting with all of us as players, and adopting the philosophy of our veteran head coach.

This was the first year that we were allowed an exhibition game before the start of season, and we hosted Omaha on Wednesday in Springfield. We predetermined that we would play five sets regardless of the outcome, in order to work on rotations and getting players game-time experience. There were moments of greatness throughout the match that fire me up for the capabilities this team has this season. However, there is always something to improve upon! We will continue to work hard and develop individual skills as well as chemistry between players. We have our Maroon and White scrimmage this upcoming Saturday, which means another opportunity to showcase our new team to the fans and get better as a group. I am beyond excited to see what this team is able to accomplish this season. We have so much talent between the incoming freshmen and the returners, and I am positive it will be a great year for the Bears!