Iowa Improves to 9-2 With Straight Set Victory Over Lamar 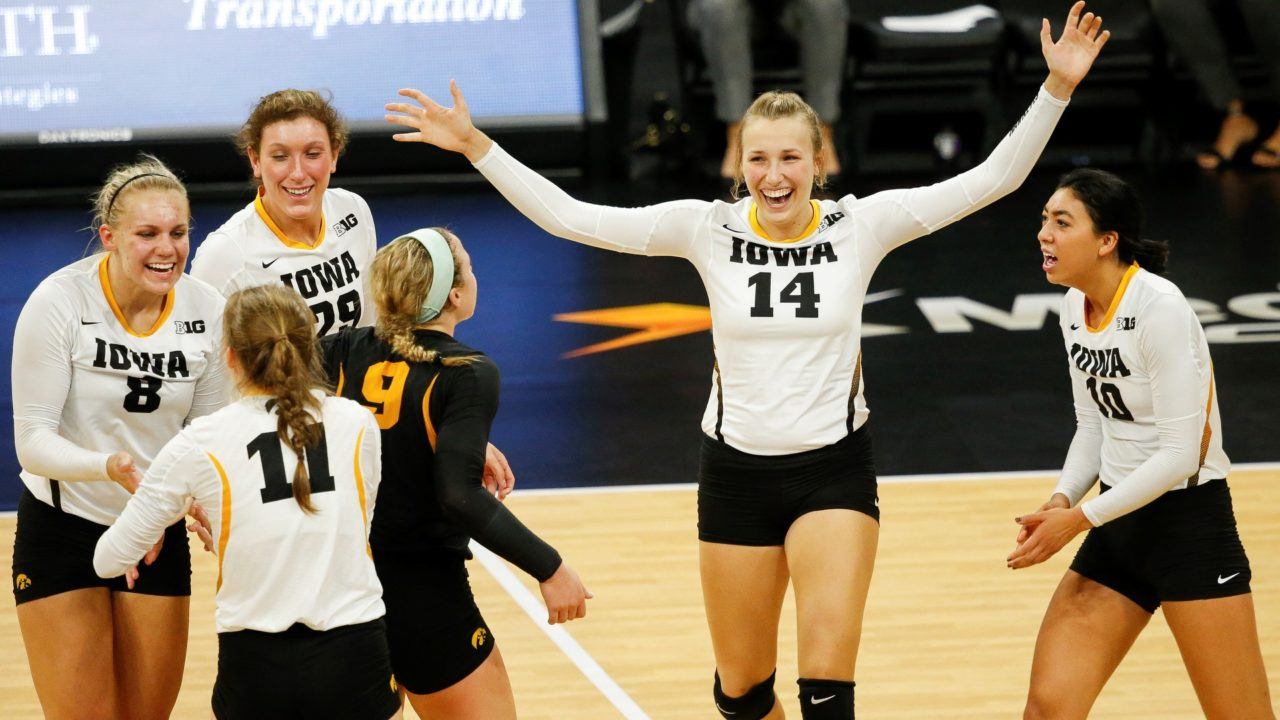 IOWA CITY, Iowa — The University of Iowa volleyball team defeated Lamar in straight sets on Friday evening in Carver-Hawkeye Arena. The Hawkeyes improved to 9-2 on the season with the win, marking the team’s best start since 2013.

Iowa utilized a 5-1 run to get out to an 8-3 lead in the first set. Seniors Ashley Mariani (kill) and Loxley Keala (kill), redshirt freshman Meghan Buzzerio (kill, ace), and sophomore Reghan Coyle (block) aided the rally. Iowa never trailed from there, using a 3 -1 run to close the set 25-19 and take a 1-0 lead in the match.

The Iowa offense came out firing in set two, hitting .370 with 13 kills. The Hawkeyes never trailed in the set, using four Lamar errors to take an early 4-0 lead. Iowa extended its advantage to 10 (18-8) with a 9-1 run. Redshirt sophomore Kasey Reuter and Keala guided the Iowa rally, each adding solo blocks and kills. The Hawkeyes remained in control from there, going on to win the set 25-14.

After a back-and-forth battle to start set three, Lamar used a 7-1 run to take a 17-13 lead and force head coach Bond Shymansky to call a timeout. The Hawkeyes responded with a 5-1 rally of their own to tie the set, 18-18. Reuter (2), Keala (1), and Janota each added kills to the run. The Cardinals regained a lead on three Iowa errors before sophomore Reagan Davey took over the Iowa offensive attack. The Ocala, Florida, native registered four kills over the final eight serves to seal the final set (25-23) and the match (3-0) for the Hawkeyes.

“I’m proud of the way they responded in the third set,” said Shymansky. “They could have just waited for the fourth set to start, but they showed conviction there at the end to finish strong. This is where the team leadership needs to step forward and the team cohesiveness needs to rise to form something that is unbreakable in those tight moments.”

Davey came up big in the final set, registering five on her seven kills. Her .545 attack percentage (7-11) marked a new career high.

“I knew coming in that my job is to be smart and be able to put the ball,” said Davey. “I was just focused on being a smart and efficient hitter. That’s something that I’ve been working on.”

In both matches combined, the Cardinals (0-11) finished with a negative attack average after finishing with 46 kills to 50 errors. Their best match of the day was against the host-Hawkeyes (9-2) with one more kill than error (26-25) and a .010 hitting average in the contest.

Despite the struggles in both matches, Big Red did show life and gave Iowa a fight for the third set of that match, and forced Iowa to get kills from Reagan Davey and Ashley Mariani to break a 23-23 tie and end the match.

Lamar was never down by more than three in the set, and took the lead with possibly one of its best runs of the season. Down 13-12, Murielle Hlavac powered one to the floor to tie it, and Tomar Thomas put LU up 15-13 with back-to-back aces from the end line. Kasey Reuter tried to answer, but was denied at the net byIvette Dim and Amy Hollowell. Dim notched the last score of the five-point run on a kill, assisted from Haley Morton.

Iowa was able to tie it at 18-18, but the Cardinals again grabbed a lead after a service error from Loxley Keala and an attack error from Reuter. Unfortunately, the Hawkeyes were able to get the set win with a strong 7-3 finish.

For the 10th-straight match, Chelsea Grant finished the contest with the most kills for Big Red, eight, and also added the highest attack percentage, .125. Hlavac grabbed six kills and was followed by Amy Hollowell(5), Thomas (4), and Dim (3). Thomas recorded the only two aces in the match.

Iowa’s leader in kills, Jess Janota tied Grant in the category. Five other Hawkeyes finished with five or more kills, and totaled 41 as a team.

For LU, Morton recorded 20 assists, and she and Lauren Stahlman tied for the team best in digs (8).

The Cardinals had their worst hitting performance of the season, and first negative attack match under head coach Alan Edwards, in the first match of the day. LU finished with 20 kills and 25 errors for a -.054 attack percentage and 6.66 kills per set. Lamar earned only 23 points in the match, 7.66 a set.

South Dakota (10-1) served tough and issued the Cardinals eight service aces, the most against LU in three sets. Audrey Reeg and Anne Rasmussen each had three in the contest.

Grant, who broke her streak of nine-straight matches with 10 or more kills, had six kills in the match – which led the Cardinals. Hollowell and Thomas had four kills apiece and Dim and Hlavac had three each.

Big Red finished with 30 digs, led by Hollowell and Lauren Stahlman (7). Hlavac had six digs and Nicole Parish and Kelly Crow both had three. Haley Morton led the team with 14 assists.

The Cardinals get a chance to rematch with the Coyotes, first team they’ll face again this season, at 1 p.m. Saturday. That match will mark the end of the non-conference slate for LU, which opens league play Thursday at Southeastern Louisiana.