Iowa Looks to Pack Carver for Saturday Match vs. Purdue 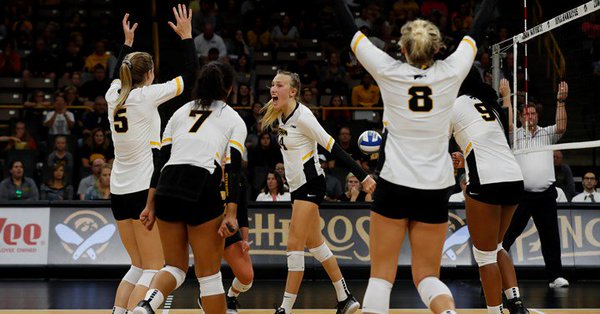 The University of Iowa volleyball team hosts No. 17 Purdue on Saturday at 7 p.m. (CT) inside Carver-Hawkeye Arena.

PROMOTIONS
The Hawkeyes’ match against Purdue will serve as Girl Scout Night and Camper Reunion Night.

HAWKEYES TAKE DOWN NO. 6 WISCONSIN

The Hawkeyes are receiving votes in the latest American Volleyball Coaches Association (AVCA) Division I Coaches Poll release on Oct. 8.
Iowa received seven votes after defeating No. 6 Wisconsin on Oct. 6.
This marks the first time since Sept. 14, 2015 that Iowa has received votes in the AVCA poll.

ORR SETTING UP TO BE ONE OF IOWA’S BEST

HAWKEYE HISTORY
The Hawkeyes’ 25-23 second-set victory over the third-ranked Huskers on Oct. 3 marked the first time since 1987 that Iowa has taken a set from Nebraska.

THESE HAWKEYES ARE HANDY WITH BROOMS

TRUE MENTAL TOUGHNESS
The Hawkeyes continue their True Mental Toughness mantra in 2018. Bond Shymansky’s squad defines true mental toughness as having a great attitude, treating others really, really well, being unconditionally grateful regardless of your circumstances, and giving your very, very best.