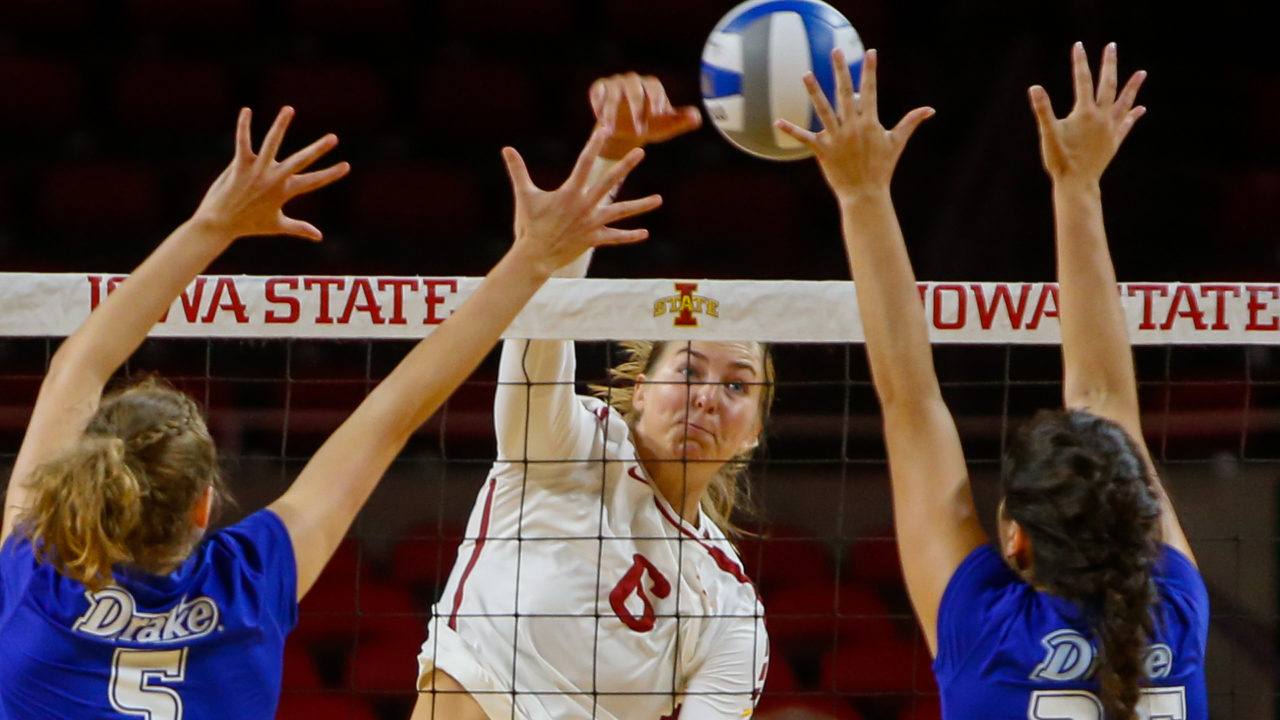 AMES, IA. – The Cyclones took down the Mavericks on Saturday, August 26th in Hilton Coliseum.

The Cyclones outhit the Mavericks .290 to .092, with senior middle blocker, Alexis Conaway, topping the charts for Iowa State, hitting .409 with 11 kills. Mackenzie Horkey was the kill leader for Nebraska-Omaha with 8 kills, hitting just .103. Attacking errors were high for both squads. Iowa State had 14 while the Mavericks generated 20 hitting errors.

Genesis Miranda and Grace Lazard were also impressive offensively for the Cyclones, with 11 kills hitting .296, and hitting .556 with 6 kills on 9 attempts, respectively.

Alexis Conaway had a strong two-way day, recording 11 kills at a .409 hitting percentage and five block assists. Genesis Miranda also found her way into double figures with 11 kills. Hali Hillegas led the back row with 15 digs, while Jess Schaben had 10 digs in back-row duty.

First Set: Iowa State 25 Omaha 9
Iowa State dominated from the first whistle, running off the first five points of the afternoon. The Cyclones were in control the whole way, but put the set out of reach of the Mavs with a 9-0 mid-set run on the serve of Monique Harris that took the Cyclone advantage to 21-7. Iowa State wrapped up the frame with Josie Herbst‘s third kill of the set to make it 25-9 ISU.

Second Set: Iowa State 25 Omaha 21
Omaha fought back strong, as a 4-0 run pushed the Mavs ahead 13-12. The Cyclones briefly got back ahead at 17-16 by a Hannah Bailey kill, but Omaha took control again at 18-17 when Herbst sent a shot long. In a set that featured 11 ties and four lead changes, Iowa State got it together at crunch time, as they ran off the final five points of the set, with Bailey and Alexis Conaway combining for the block to give ISU the second 25-21.

Third Set: Iowa State 25 Omaha 23
The Cyclones once again found themselves needing to dig out of a hole, as Omaha went on a 3-0 run to push the advantage to 9-6. The Cyclones were able got power up the offense and go on a 4-0 run via four different players getting kills to tie the set up at 15-15. Omaha got ahead by four at 20-16, but the Cyclones slowly chipped away to get back into it. Iowa State finally got ahead at 23-22 when Josie Herbstposted her eighth kill. The Cyclones closed out the match on first asking via a Genesis Miranda kill at 25-23.

Player of the Game
Alexis Conaway. The senior middle blocker converted her first five shots all for kills on the way to an outstanding afternoon. Conaway finished with 11 kills at a .409 hitting percentage, six digs and five block assists.

Up Next
Iowa State will be back in action this evening at 6:30 p.m. against New Mexico. The match can be watched on Cyclones.TV Powered by Mediacom and the Cyclones.TV web player.