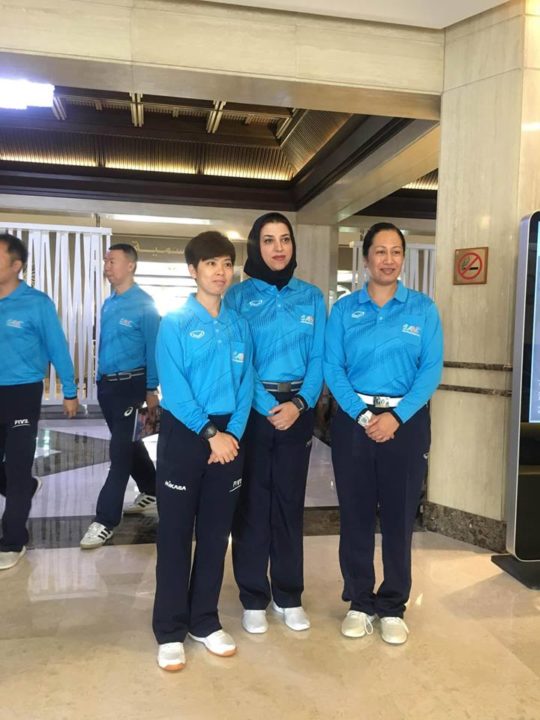 Three female referees, including one from Iran (middle), are working matches at the 2018 U20 Asian Men's Volleyball Championship in Bahrain. Current Photo via Rahim Rahimzadeh

Rahim Rahimzadeh contributed to this report.

As part of an initiative to further engage women in the sporting culture in Iran, the country of Iran has sent a female referee, Ms. Narges Afshin, to accompany its men’s U20 volleyball team at the Asian Men’s U23 Volleyball Championships in Bahrain.

Afshin is one of 3 female referees sent to the 22-team tournament. Macao sent Sio Kit Wa and New Zealand sent Mary Kerekere to the tournament as well. Each country was able to choose 1 referee to participate in their delegation, with Turkmenistan being the only federation that declined to do so.

In the past few years, Iran has drawn international criticism as a result of their treatment of women at sporting events, especially volleyball. In 2017, Iran was accused of not selling any tickets to women for its hosted stop of the 2017 FIVB World League, for example, and the country’s hosted beach volleyball tournament remains for men only.

A new report from the Human Rights Watch earlier this year, however, indicates that the country has begun to allow women to watch international volleyball live (and live broadcasts of the soccer World Cup). The rights are still limited, however, both in number, and in requiring them to be “pre-vetted.”

The 2018 U20 Asian Men’s Volleyball are underway and will run until July 28th. Iran won their pool without dropping a set in two matches and will await the winner of Hong Kong and India in the round of 16.