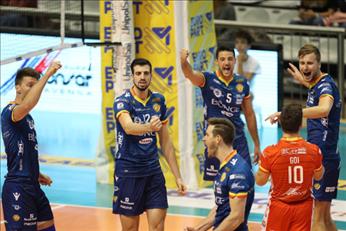 The third round of the Italian Men's League has concluded with mid-week matchups. Current Photo via legavolley.it

The third round of the Italian Men’s League has concluded with mid-week matchups. Azimut Modena and Sir Safety Conad Perugia remain undefeated after three matches in the league, while Bunge Ravenna picked up a big win over powerhouse Diatec Trentino. Top Volley Latina and Kioene Padova each picked up their first wins in the league as well this week.

Americans played a big role in their squad’s successes this week, as Aaron Russell, Max Holt and Micah Christenson each picked up MVP honors for their performances in round three.

Cucine Lube Civitanova picked up a big road win against Revivre Milano behind 18 points from both Osmany Juantorena and Tsvetan Sokolov. The strong point for the team was in Micah Christenson, as he held consistent throughout the match to earn the MVP title for the win.

Remaining unbeaten so far this season are Sir Safety Conad Perugia along with Azimut Modena. Azimut Modena was led by American Max Holt in their win with eight points in crucial moments while Aaron Russell brought Sir Safety to a win over Wixo LPR Piacenza in three.