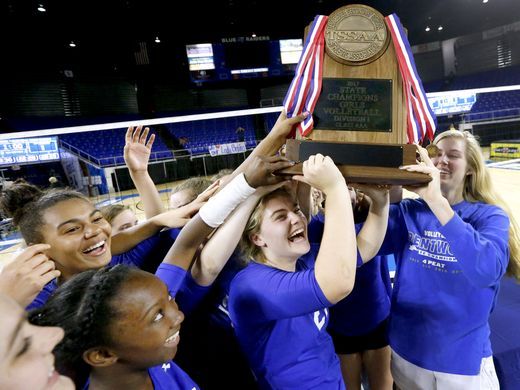 Tennessee has concluded their high school volleyball season with the ending of the state tournament where five teams took home the title in their respective divisions. Current Photo via HELEN COMER/DNJ

Tennessee has concluded their high school volleyball season with the ending of the state tournament where five teams took home the title in their respective divisions. Brentwood and Knoxville Webb have now each won their fifth-straight state championship.

Division I – Class A

Berean Christian hit for .343 in the teams three-set sweep over South Greene to take the Division I, Class A state title. Lily Felts posted 34 kills on a .456 hitting clip along with Jada Mullins 11 kills.

Felts is a Tennessee commit, staying in her hometown to play volleyball in the NCAA. She has one more year to go in high school, playing for her father Cory Felts. On the year, Felts has posted 662 kills along with 82 aces.

Portland took down Knoxville Catholic in four sets to claim the state title. Marlayna Bullington led the way with 19 kills, six aces and 24 digs for a double-double while Alexis Wakefield picked up a match-best 28 digs.

Brentwood had a standout performance by Logan Eggleston in the five-set finale, as she slammed down 47 kills on a .379 hitting percentage along with 15 digs for a double-double. Eggleston is a Texas Longhorn commit that posted 266 kills and 137 digs on the year. Equally as impressive, Brentwood held Ravenwood to one point in the fifth frame of the match to claim the title.

The defense for Brentwood helped them to the win as well with four players in double-digit digs – Andrea Aceveda (25), Eggleston (15), Morgan Carter (11) and Bella Bianchet (10).

Knoxville Webb claimed their state title using just seven players – with three posting double-digit kills in the quick three-set sweep. Kayleigh Hames led the way with 13 kills on a .591 hitting clip while Meredith Wallace put down 11 kills and four aces on a .350 hitting performance. Setter Nicklin Hames dished out 17 assists along with 11 kills and seven digs in the win. Haley Jenkins handed out another 19 assists, eight digs and six aces.

Kayleigh Hames is a Pepperdine commit that has recorded 478 kills, 43 aces and 213 digs on the year while Nicklin Hames is a Nebraska recruit with 321 assists, 168 kills and 164 digs on the year. The duo helped the squad to their fifth-straight Division II-A state championship.

Baylor claimed the Division II, Class AA state title over Briarcrest in a four-set matchup. The win came behind three players that recorded double-doubles in the match – setter Sarah Sumida with 39 assists and 17 digs, Ally Craig with 16 kills and 10 digs followed by Denver Rogers with 12 kills and 10 digs. Also picking up double-digit digs in the win was Elizabeth Case with 11 along with three service aces.

Sumida is a Tennessee Tech commit and was named the Division II-AA Region MVP of the year, having dished out 1,353 assists on the year and more than 5,000 in her career.