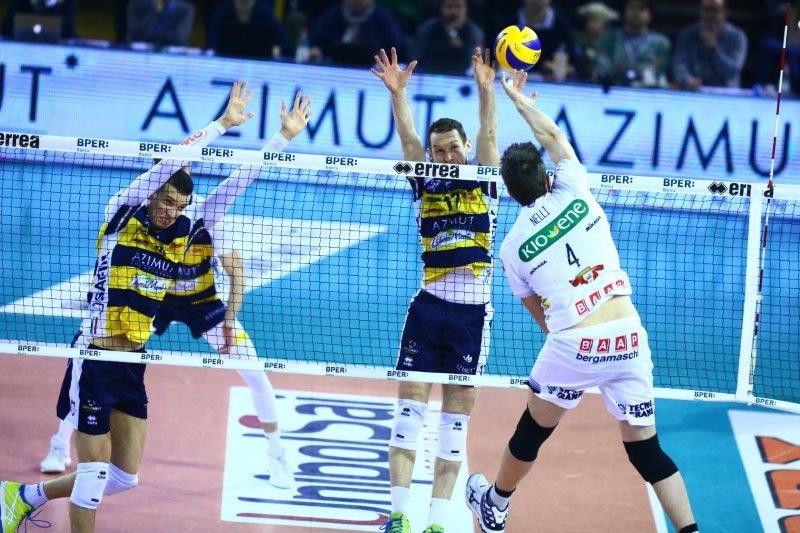 Round 13 in the Italian men's league saw five road wins, including Kioene Padova over Azimut Modena amid controversy with the team's leading player Earvin Ngapeth and his brother Swan Ngapeth. Current Photo via legavolley.it

Round 13 in the Italian men’s league saw five road wins, including Kioene Padova over Azimut Modena amid controversy with the team’s leading player Earvin Ngapeth and his brother Swan Ngapeth.

The lack of Earvin is a struggle for the team, though the team has a number of star players lining their roster like Bruno Rezende, Max Holt, Maarten Van Garderen and Tine Urnaut. Earvin’s controversy began as he had a falling out with the team’s head coach Radostin Stoytchev after strict team rules would not allow the Ngapeth brothers to travel to France follow one of their matches. Earvin is signed with the team through the 2020 season and recently, Modena has announced they will take disciplinary actions against the brothers for their actions.

Diatec Trentino has continued their winning streak with a four-set win over Gi Group Monza behind 20 points from Uros Kovacevic. Nicholas Hoag added another 17 points while Luca Vettori contributed 13 points.

Biosi Indexa Sora won just their third match of the year over Vibo Valentia in three sets. Dusan Petkovic led the team with 19 points while Rasmus Breuning Nielsen added another 15. Vibo Valentia’s President Pippo Callipo was disappointed with his team come the beginning of the third set, leaving the stadium and not finishing out the remainder of the match. Following the match, he made a statement that was summed up as “I understood that we were going to meet a defeat. It’s a team that is not a team.”

BCC Castellana Grotte made a comeback win over Cucine Lube Civitanova as they lost the first set but came back to win in five. Djana Moreira led the team with 22 points while Georgios Tzioumakas recorded 17 in the win.