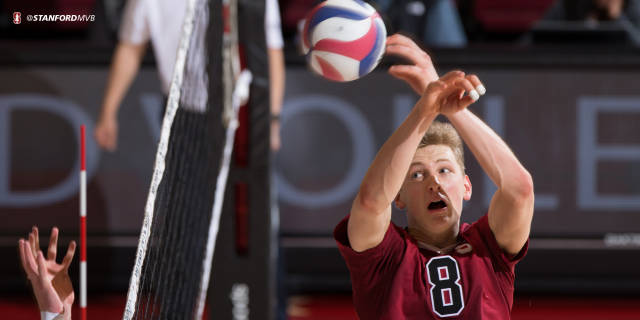 It’s not uncommon for players to essentially be towers on the court, especially in the front row. But it’s a... Current Photo via Stanford Athletics

It’s not uncommon for players to essentially be towers on the court, especially in the front row. But it’s a tad unusual for a setter to be among them.

James Shaw is a 6-foot-8 setter who recently graduated from Stanford and landed as an alternate for the U.S. Men’s National Team. He’s at least two inches taller than the next tallest setter on the list, and he was as lofty as his middle blockers at Stanford. For comparison, the starting setter on Brazil’s men’s gold-medal-winning Olympic Team Bruno Rezende is only 6’3″ tall.

Because of that, he’s a uniquely offensive setter whose mastery of the dump has certainly delighted teammates and frustrated opponents who can’t react quickly enough.

After being utilized as an outside or opposite hitter in high school because of his height, he said that starting at Stanford he wasn’t sure if he’d end up a hitter or setter.

“I love to hit, and that was obviously the more exciting thing for me at the time, but I also knew that becoming a great setter would help me down the road and get me a lot father than being a hitter,” he told The Stanford Daily in April. “There aren’t a lot of 6-foot-8 setters out there that can move around well enough to have a long career.”

Shaw’s greatest strength lies in his ability to fake out blockers and, using one hand, perfectly place the ball for a hitter — or quickly, powerfully push the ball to a hole on the floor.

“I’ve always seen myself as an offensive threat, and the more kills I get or the more I can get the other team’s defense keying on me, the better the chances are going to be of having a great match,” Shaw told The Stanford Daily.

In his last season at Stanford, Shaw was the MPSF Player of the Year and won the Lloy Ball award, which is presented to the nation’s top setter. He was also an AVCA First-Team All-American.

“It’s like hitting off a tee,” Conrad Kaminski, who was a middle blocker with Shaw at Stanford, said of hitting off a 6-foot-8 setter. “Everything just moves that much quicker. It’s just phenomenal. It’s impossible to play defense against.”

Shaw was an alternate for Team USA at the Rio Olympics this summer, and he’s playing with Italy’s Pallavolo Padova this winter.

“I would obviously love to get on the court this summer with the team and represent America, but the setting position is full of guys who are talented and have been in the gym longer than I,” he said, according to his Team USA bio page. “The coaches know, though, that I’m in it for the long haul, so I have no worries or stresses about making an immediate impact.”