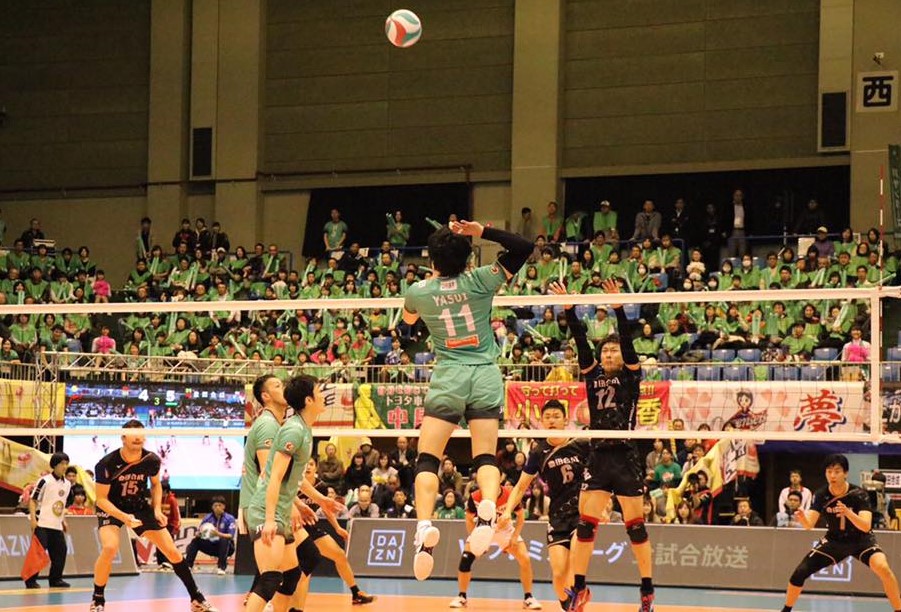 After last Sunday’ crazy final day of the Japanese V.League Men’s Final 6 Playoffs, the JT Thunders met the Toyota Gosei Trefuerza in the Final 3 (Semifinal) on Saturday at the Kumamoto Prefectural Gymnasium in Kumamoto, Japan. The expected two main characters in the match were JT’s Australian bomber Thomas Edgar and Toyota’s Croatian scoring machine Igor Omrcen. In two previous matches this season both players each went for more than 30 points in the match.

Toyota got a five point midway into the first set at 13-8, but the Thunders worked in back to even and took a three point lead at 19-16. That lead by the Thunders would prove enough to win the first set 25-21. However, Thomas Edgar late in that first set appeared to move gingerly on his left foot. He served twice at 2-1 and 3-1 in the second set before being taken out of the match. The Japanese announcers on the broadcast said that he had tweaked it in practice on Friday, and with the substitution, the match appeared to shift to Trefuerza’s favor.  Already Edgar had 12 kills in just barely over one set played, so could his replacement Yusei Yasui provide any support? In the rest of the second set, Toyota used the loss of Edgar to their advantage winning 25-20 to tie the match at 1-1.

The third set started with the Trefuerza taking a three point lead at the first TTO 8-5. The Thunders caught up to tie the set at 10 and neither team could get a big lead by the the second TTO, 16-15 Toyota. The Trefuerza then went on a two-point run to take a 18-15 lead. The Thunders took their final timeout at 16-19, but it did not seem to make a difference. However a Trefuerza service error followed immediately by a Daisuke Yako service ace brought the Thunders within one at 19-20. Two straight Omrcen spikes put the Toyota lead lead back at three points 22-19. It appeared lost, but the Thunders did not give up, Yako had replaced Yasui in the third set became the focus of the offense for the Thunders at that point with 5 kills in 6 points to win the set 25-23! An amazing comeback by the Thunders without their best player to take a 2-1 set lead.

In the fourth set, it was tied at 8-8 before the Thunders went on a three point run to take a 11-8 lead. But the Trefuerza had a 4-1 run to tie the set at 12 all. Toyota had a two point lead at 16-14 at the second TTO. Could they keep the lead? No, as an Omrcen back attack violation, a Toyota net touch, a Yako spike and a Shohei Yamamoto service ace gave the Thunders a 18-16 lead. Toyota matched the JT run, with three straight of their own to take a 19-18 lead, and a Thunders timeout. Both teams exchanged points until 21 all, and a hitting error gave the Thunders a 22-21 lead as Toyota used their last time out. Omrcen tied the set immediately after the timeout, but a Takuya Takamatsu service error gave the the lead back to the Thunders 23-22. Omrcen had two chances to tie, but an overpass off a dig gave the Thunders two match points at 24-22. Omcren did bring the Trefuerza within one, but the substitute Daisuke Yako killed off the block to win the set 25-23 and match 3-1, in a massive upset for the Thunders.

Will Edgar be able to play on Sunday and if not, can the Thunders spread the offense again like the did on Saturday? Will Omrcen need more help from his Toyota teammates to advance to the Final?