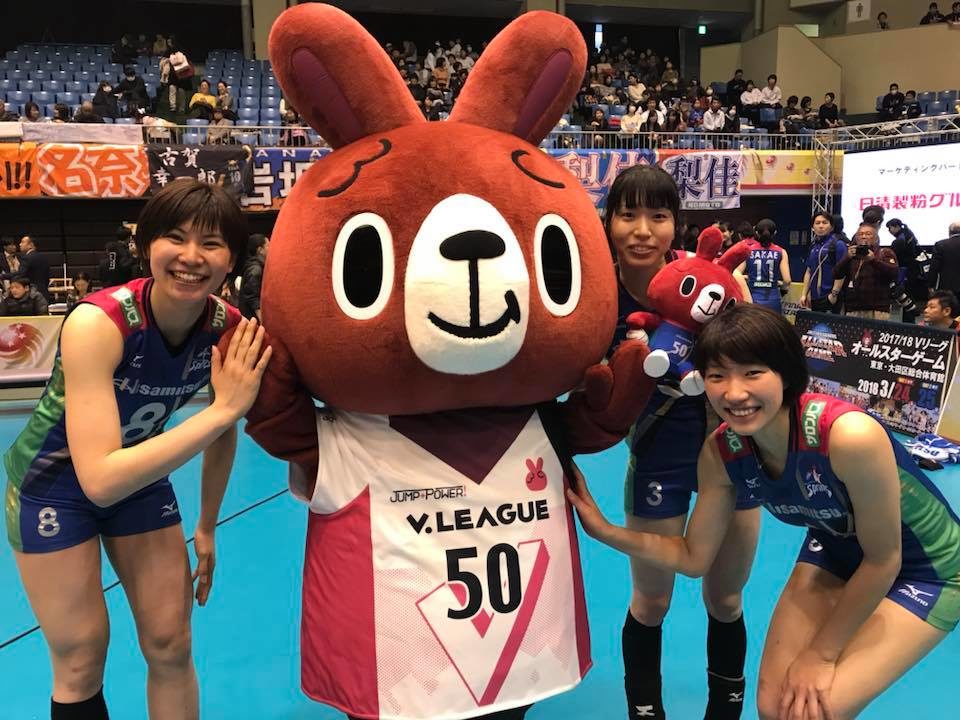 With the upset of the Hisamitsu Springs last week by JT Marvelous in the V.League Final 6 Playoffs, the Final 3 (Semifinal) two-match series between the Springs and Toyota Auto Body Queenseis began on Saturday from the Kumamoto Prefectural Gymnasium in Kumamoto, Japan. With only wins counting in the Final 3, a good start on Saturday would give a team momentum for the second match on Sunday.

In the first set, Hisamitsu scored three straight points to take a 5-2 lead, which they further extended to 10-5 which forced Toyota to use a time out. The Queenseis then went on a 8-5 run to tie the set at 13. At 16 all, Hisamitsu went on a 6-1 run that ended with consecutive blocks by Foluke Akinradewo gave the Springs enough of a gap to win the set 25-22 and a 1-0 set lead.
The second set started with the Queenseis’ Erika Araki scoring three straight points through two blocks and a kill to give Toyota a 4-1 lead. Toyota would extend the lead to 8-3 at the first TTO. Hisamitsu then rattled off six in a row to take a 9-8 lead. The teams would swap points until Toyota took a 14-12 lead with a Neriman Ozsoy spike. A spiking error by the Springs and a service ace by Saori Takahashi made it 16-12 Queenseis. Toyota would push it to 18-13 The Queenseis could not hold their lead as two service aces by Hikari Kato got the Springs within two. However from two back row foot faults by Oszoy in a three point span gave the 23-20 lead to the Springs. Toyota got a service ace by Momoko Higane to make it 24-23 Springs, but a Akinradewo spike ended the set 25-23 and the Springs had a 2-0 set lead.

In the third set, it was fairly close to start by the Queenseis took a 12-9 lead with consecutive Neriman spikes. Foluke Akinradewo blocked Neriman and a double contact by the Queenseis tied the score at 13. Rika Nomoto seemed to get going at this point for the Springs offense and gave the springs a 17-15 lead with a spike. Toyota errors pushed it to a four point lead by Hisamitsu at 19-15. Toyota just could not get out of rotations which let the Springs push their lead even further to 22-16 and gave the Springs enough of a gap to win the set 25-22 and the match 3-0.

Neriman Ozsoy led all scorers with 22 points (19k, 3b) in the match, while Rika Nomoto was the leading scorer for the Springs with 16 (14k, 2b). The Springs were just dominating the blocking portion of the game 12-7, with Risa Shinnabe and Akinradewo each with 4 blocks. Araki did match them with 4 blocks as well, but outside of Ozsoy, Toyota had no other blocks. Araki finished with 12 points (8k) for the Queenseis. Yuki Ishii, Akinradewo and Shinnabe all reached double figures with 15 (13k, 1b, 1a), 12 (8k) and 10 (5k, 1a) respectively in the Springs win.

Toyota needs Erika Araki on the court because the late runs in sets by Hisamitsu appear to happen when she’s off the court. Hisamitsu has better team balance on offense than the Queenseis and it shows when Araki is not on the court.