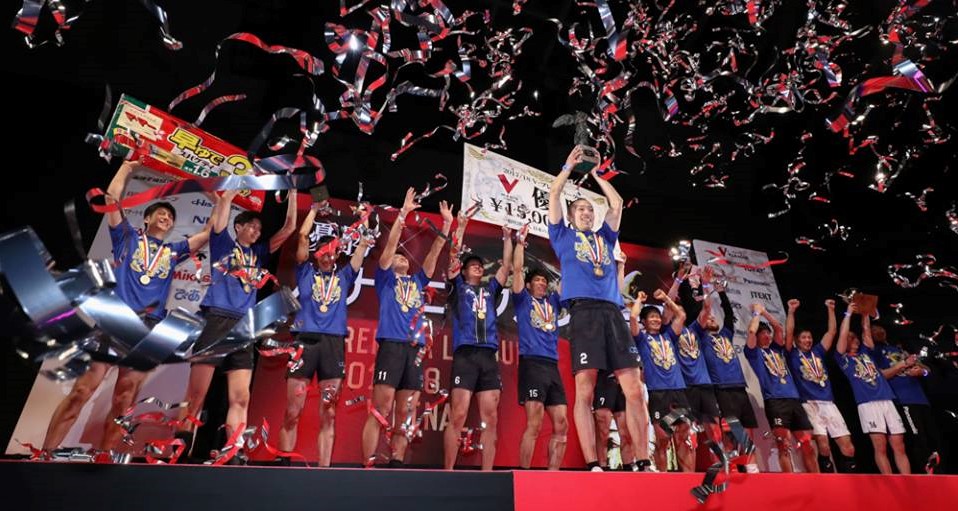 Going in to second match of the Japanese Men’s V.League Final, the Panasonic Panthers had a 1-0 series lead against... Current Photo via Japan V.League

Going in to second match of the Japanese Men’s V.League Final, the Panasonic Panthers had a 1-0 series lead against the Toyoda Gosei Trefuerza. The Trefuerza needed to win Sunday’s match to force a “Golden Set.” However, Toyoda would be without their Croatian scoring machine Igor Omrcen and could the rest of the team overcome the loss of their best player? The Tokyo Metropolitan Gymnasium hosted the second match with a crowd of 5,641.

In the first set, it was very close to start at 7 all. Toyoda went on a 3-0 from a Panasonic service error, a Michal Kubiak hitting error and finished with a Ryota Denda ace for a 10-7 lead. Hirotaka Kon had a kill and followed it immediately with a block to give the Trefuerza a 14-9 lead. Takuya Takamatsu had a block for Toyoda (18-13) and landed on Panasnoic’s Takahiko Imamura‘s foot and twisted his ankle. Takamatsu was able to continue, but if he was out of the match, Toyoda would be down two star players against the best team in the league. Toyoda and Panasonic kept siding out and the Panthers could not get closer than four points as a Naoya Shiraiwa block for Toyoda ended the set 25-19, for a 1-0 set lead to the Trefuerza, who were back in business.

Panasonic jumped on top of the Trefuerza at the begininng of the second set with a Michal Kubiak block, followed immediately by a Kenji Shirasawa block for a 4-1 lead. Kubiak and Akihiro Yamauchi both followed with back-to-back blocks for a 6-2 lead. At the first TTO, Panasonic had a 8-4 lead. A long rally with a Yamauchi spike gave the Panthers a 13-8 lead and Toyoda called their first time out. Toyoda just kept having to play catch up in the second set but the lead for Panasonic kept growing. A Toyoda service error gave Panasonic the set 25-16 and tied the match at 1 set all.

With the match tied, the winner of the third set would have momentum to ending the match in the fourth. A Tatsuya Fukuzawa spike, a Toyoda hitting error, Fukuzawa block, Kubiak spike and a another Toyoda hitting error gave the Panthers a 5-0 run for a 13-8 Panthers lead. Surely the Panthers would hold the lead, right? At the second TTO Panasonic had a 16-12 lead, but the Trefuerza used a Panasonic hitting error, Ryosuke Tsubakiyama spike and a Denda ace for a 3-0 run to force a Panthers time out at 16-15. Panasonic was able to push it back up to a three-point lead at 19-16, and from there kept Toyoda at bay. At 22-20, Toyoda got a spike from Shiraiwa to make it 22-21 and then a Kubiak serve receive error tied the score at 22. Kubiak made up for his error with a kill off a long rally to give the Panthers a 23-22 lead. Takamatsu killed for Toyoda to tie at 23. First to a two point lead wins. A Panasonic overpass gave Takamatsu another kill for a 24-23 Trefuerza lead and set point. Panasonic used their last time out and got a service error from Denda to tie at 24, and onto extra points. Takamatsu killed for 25-24 Toyoda and he tipped to the flow to win the set 26-24, 2-1 set lead Toyoda. Panasonic blowing a five-point was just a shock result in the third set.

A Toyoda set win would force a Golden Set, so Panasonic knew that they had to win the fourth set to have a chance to win the match in five sets. At the first TTO, Toyoda had an 8-6 lead and Panasonic could not get closer than one point. A double contact by Hideomi Fukatsu gave the Trefuerza a 13-10 lead, and Panasonic called their first time out. A Toyota service error, followed immediately by a Kubiak service ace, and a Yamauchi block tied the score at 13 all. After that neither team took more than a one point lead. At 20-19 Trefuerza, Takamatsu served an ace to give them a 21-19 lead and Panasonic took their final time out and it looked like Toyota had their gap to a Golden Set. However, Takamatsu served into the net after the time out to make it 21-20 Toyoda. A very long point followed and Takahiko Imamura tied the score with a kill at 21. Both teams exchanged the next couple of points to make it 23 all. Kubiak killed from the back row to give the Panthers a 24-23 lead and a Trefuerza time out followed. Shuzo Yamada spiked to tie at 24 and onto extra points for the second time. Imamura needed three chances, but the third spike was not dug and the Panthers took a 25-24 lead. Kubiak killed from the front row to take the set 26-24, and tie the match at 2 sets all.

The fifth set now was filled with tension, as a Panasonic win would give them the championship, while a Toyoda win would force a Golden Set. Every error in the sprint to 15 would be big. The first serve by Ryota Denda was originally called out, but challenged by Toyoda and overturned to become an ace as it landed right on the line. Denda followed immediately with an service error into the net. Panasonic took a two point lead at 5-3 after a Fukuzawa spike off the block. Takamatsu spiked out to make it a 6-3 lead Panthers and Toyoda took their first time out. The Panthers maintained their three-point at the side-change 8-5. Kubiak blocked Takamatsu for 9-6, and then Kubiak hit an off-speed shot down the right sideline past Takamatsu for a 10-6 lead to Panasonic. A Tsubakiyama spike off the block brought the Trefuerza within two at 9-11 and Panasonic used a timeout. Toyoda had two chances to bring it within one, but Fukuzawa blocked Tsubakiyama one-on-one for a 12-9 lead. Takamatsu had a second service challenge at 10-12 as the ball was called out. Again the call was overturned as the ball landed right on the endline, 11-12 and Panasonic called their final timeout. Takamatsu came out of the timeout and aced again to tie the score at 12! However, Takamatsu hit into the net to give Panasonic a 13-12 lead. The Panthers made a blocking switch for Fukatsu with the lead and Kubiak would become the backrow setter for the Panthers. Kubiak gave the Panthers two chances and his last set to Masahiro Sekita for the kill gave the Panthers two match points at 14-12. Takamatsu killed to bring them within one and Panasonic put Fukatsu back into the match. Fukuzawa hit crosscourt for the Panasonic set win at 15-13, match win 3-2 and the championship. The Panthers by winning the championship also received 15 million yen in prize money (US$141,562 according to oanda.com exchange rates). Panasonic had been the best team all season and even with the loss of Shimizu, the Panthers had the depth to overcome his loss. Toyoda fought hard all season with and without Igor Omrcen and to be with a couple of points of going to a Golden Set, it will be a hard loss to swallow at present, but they should be proud of their play with their backs to the wall.

The match was really decided in three areas. Panasonic won the blocking battle 10-6. Toyoda made up for that in service aces 8-2. However, Toyoda could not keep that advantage as their service errors killed them 20-12 (-8 for Panasonic). Put this together and the Panthers had a six point advantage in the match.

With the end of the season, the Premier League announced their Best Six (plus libero) Players. Michal Kubiak was named the MVP of the League for the season. Thomas Edgar who led the league is scoring for the JT Thunders was also named to the list. Kunihiro Shimizu who was injured late in the season and his Panasonic teammates Kenji Shirasawa and Hideomi Fukatsu (setter) were named as well. Toyoda’s Ryota Denda was the last person named to the Best Six. The Trefuerza’s Kochiro Koga was named the Best Libero. Takamatsu was player named for the Fighting Spirit Award because he was necessary for Toyoda’s success when Omrcen was injured. Wataru Inoue of the JT Thunders was named the rookie of the year.

Most Valuable Player of the Year Award