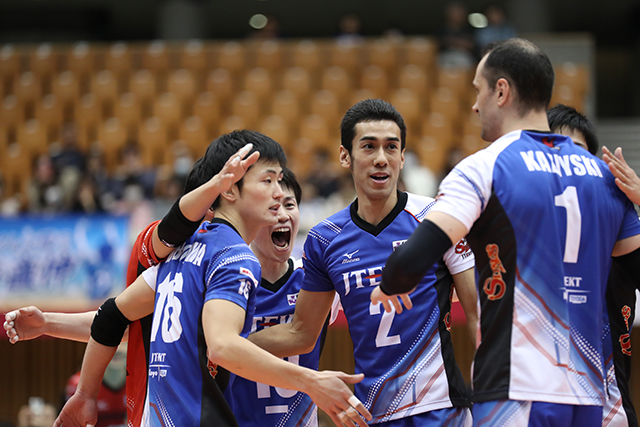 With three matches left in the regular season, Sakai Blazers were in a must win position against Toyota Gosei Trefuerza.... Current Photo via JTEKT Stings

With three matches left in the regular season, Sakai Blazers were in a must win position against Toyota Gosei Trefuerza. A loss by the Blazers would all but put them out of the playoffs. If JTEKT and Suntory won their matches, then the Blazers would be eliminated. Toyota were trying to keep their second place standing with a win. Sakai fought hard in the first set, but the Trefuerza won it 25-23. The second set was not as close and the third set was even worse for the Blazers as Toyota swept them match 3-0. Igor Omrcen led all scorers with 22 (21k, 1b) for Toyota, while Wallace Martins had 21 for Sakai. Hirotaka Kon for Toyota had 5 blocks to go with his 7 kills for 12 points. Toyota is solidly in second with 38 points. Sakai needed a loss by JEKT to stay alive.

JTEKT Stings faced the third place Toray Arrows. JTEKT with a win would eliminate Sakai, while a loss would give Sakai a chance to overtake the Stings. Toray was trying to keep pace with Toyota and a win would do that. JTEKT dominated in the first set and won an extra point second set to take a 2-0 sets lead. One more set would clinch their playoff berth. Toray said not so fast to win the third 25-21. Late in the fourth set, JEKT got a two point lead, which they held onto to win the set and the match 3-1. Sakai is eliminated from the playoffs and JTEKT are going to be in the Final 6. High schooler Yuji Nishida had a great match with 32 points (26k, 2b, 4a) for the Stings and it is not often that you can say you outscored Canadian scoring machine Gavin Schmitt and won. Schmitt had 25 points (all kills) in the loss. Matey Kaziyski had 20 points (14k, 1b), 5 of which were aces for JTEKT, while Yamato Fushimi for Toray had 5 blocks as part of his 12 points (6k, 1a). Even with the results JTEKT are still in sixth place, while Toray is still in third place.

Suntory Sunbirds met the bottom dwellers FC Tokyo. Suntory clinched their playoff berth when Sakai lost, so they were looking to stay ahead of the Stings to get some bonus points for their finish in the regular season. Teams are given bonus points based on their finish in the regular season 5 for first on down to 1 for fifth, while sixth does not receive any bonus points. Both teams split the first two sets. Suntory took a late lead to win the third set, but FC Tokyo won the fourth set in extra points. Suntory got out to an early lead in the fifth set and did not let up winning it 15-8 and the match 3-2. Suntory’s Yadrian Escobar was a wall with 5 blocks and a cannon at the service line with 5 aces. He also added 33 kills for a total of 43 points. His teammate Yoshifumi Suzuki had 6 blocks as part of his 13 points (7k) in the win. Kenta Suzuki (no relation to Yoshifumi) for FC Tokyo had 25 points (22k, 1b, 2a) in the loss.

Panasonic Panthers met JT Thunders in a future Final 6 matchup. Panasonic won the first two set, but the Thunders worked their way back to even the match at 2 sets all. The Panthers took the fifth set 15-13 and the match 3-2. The Thunders are just one point behind Toray for third place. Panasonic has already clinched the regular season title, so any additional win over future opponents will be welcomed from a psychological standpoint. Australian Thomas Edgar led all scorers with 39 points (36k, 2b, 1a) for JT. Takahiko Imamura replaced Kunihiro Shimizu in the starting lineup and finished with 25 points (20k, 4, 1a) in the win for Panasonic.