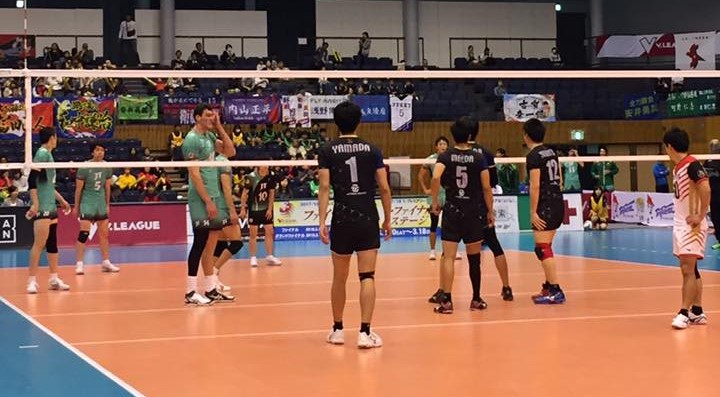 For the second matchday of the Japanese Men’s V.League season, two matches were played in Komaki, Aichi prefecture, the home... Current Photo via Toyota Gosei Trefuerza

JTEKT Stings faced FC Tokyo in Osaka in the first match there. All three sets were decided by two points each. Only the first set went to extra points, 33-31 won by JTEKT, who won the match 3-0. Bulgarian Matey Kaziyski (17k, 2b, 2a) for JTEKT and Bosnian Milan Pepic for FC Tokyo (17k, 4b) led all scorers with 21 points each. JTEKT remained undefeated on the season.

In the later match in Osaka, it was an Osaka Derby between the Panasonic Panthers and hosts Suntory Sunbirds. Panasonic comfortably defeated their neighbors 3-1. Kunihiro Shimizu of Panasonic led all scorers with 30 points (25k, 3b, 2a). His Panther teammates Akihiro Yamauchi and Michal Kubiak had four blocks each. Cuban Yadrian Escobar had 24 points (21k, 1b, 2a) for Suntory in a losing effort. Panasonic remained undefeated on the season with their victory.

Switching to the first game in Komaki, the defending championship Toray Arrows faced the Sakai Blazers. Both teams were looking for their first win of the season. Toray came from a 1-0 set deficit to with 3-1. Canadian Gavin Schmitt for Toray led in scoring with 30 points (28 k, 2a), his 82nd time scoring 30 or more worldwide. His teammate Yamato Fushimi had 4 blocks for Toray. Brazilian Wallace Martins led Sakai in scoring with 24 points (23k, 1a). The win vaults Toray into 4th place.

In the last match of the day, Toyota Gosei Trefuerza met JT Thunders, in a match up of scoring machines, Croatian Igor Omrcen for Trefuerza and Australian Thomas Edgar for the Thunders. Toyota Gosei handily won the match 3-1. Omrcen and Edgar basically fought to a draw, 34 (29k, 1b, 4a) for the Croatian and 35 (29k, 4b, 2a) for the Australian. Trefuerza’s Ryota Denda had 5 blocks to lead the match. Toyota Gosei’s win moved them into a 3 way tie for first, as Panasonic and TEKT, all have 2 wins, 6 points and the same sets ratio.