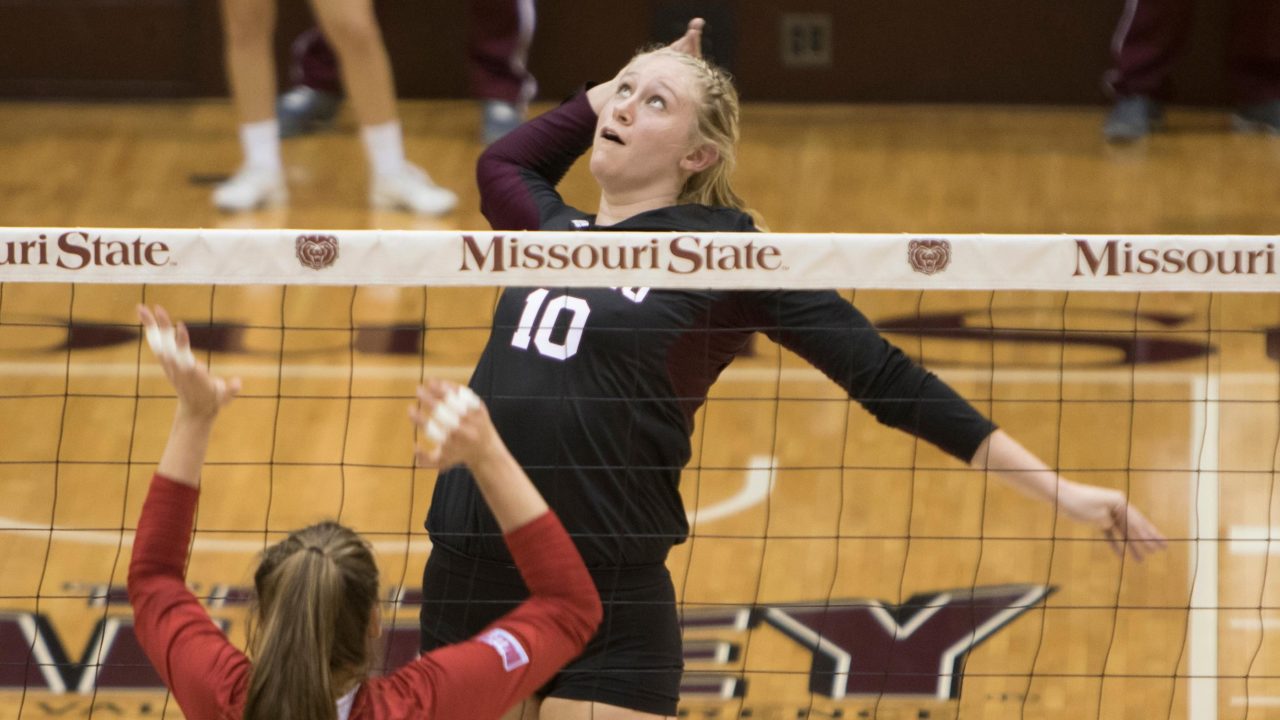 Missouri State made just five hitting errors in the match and got double-digit kill efforts from senior middle blocker Lynsey Wright and sophmore outside Aubrey Cheffey in a sweep of Indiana State on Saturday.  Current Photo via Missouri State Athletics

TERRE HAUTE, Ind. – Missouri State made just five hitting errors in the match and got double-digit kill efforts from senior middle blocker Lynsey Wright and sophmore outside Aubrey Cheffey in a sweep of Indiana State on Saturday.

Wright hit at a .636 clip, making just one error with 15 kills in 22 swings, while Cheffey hit at a .538 efficiency with 14 kills in 26 errorless swings. Senior outside Lily Johnson was next on the team with seven kills, while junior middle MacKenzie Irwin notched six. Wright also put up at a team-best three blocks, while junior libero Emily Butters notched 17 digs. Sophomore setter Daniele Messa followed with 14 saves.

Senior outside Sarah Peterson paced the Sycamores with nine kills, while junior outside Laura Gross (8) and freshman outside Nikkie White (7) followed. Peterson hit at a team-best .292 clip. Senior libero Steph Bindernagel served up both of the team’s aces, while registering 15 digs. Gross added 10 digs.

Cheffey turned in three kills and a block and three other players notched putaways as Missouri State jumped out to a 12-6 lead in Set 1. Four kills brought the Sycamores within three at 13-10, but the Bears responded with a 4-0 run, including two more Cheffey kills. Indiana State was within five at 17-12, but would get no closer as MSU ended the stanza on an 8-2 run. Wright notched three kills and a block in the final stretch.

Missouri State scored the first three points of Set 2 and went on to a 9-5 lead as Wright downed to kills and Butters added an ace. ISU made it a one-point game at 10-9 with back-to-back aces by Bindernagel. Two kills and a block by Cheffey stretched the advantage to six at 15-9. The teams split the next 16 points leading to a 23-17 score. Putaways by Cambree Villarreal and Wright clinched the 25-17 win.

A 7-1 Missouri State advantage set the tone for the third and final stanza. Four MSU miscues cut the margin to two at 10-8 and later 12-10 and 13-11. The Bears scored seven of the next 10 points, including three kills and a block by Wright to go up 20-13. The teams traded points over the next six serves, before a service error and hitting error wrapped up the match at 25-16.

The Bears (20-5, 12-0 Missouri Valley Conference) extended their win streak to 13 matches overall and 28 in MVC play on the strength of a .390 team hitting percentage, led by Lynsey Wright’s 15 kills on .636 hitting and Aubrey Cheffey’s 14 kills on 26 swings without an error.

Wright vaulted past Mindy Struckhoff, Katie Werges and into a tie with Erin O’Connor for the No. 9 spot on MSU’s career kills list with 1,244, while Cheffey’s kill total represented a career high for a three-set match. MacKenzie Irwinadded six kills on seven attempts.

Cheffey had six kills in the first set and was key to a pair of MSU runs, first scoring three straight points to give Missouri State the lead for good at 5-3, and adding consecutive kills to cap a 4-0 run at a 17-10 advantage. Wright added three of her six kills late to help the Bears pull away after hitting .333 as a team with 17 kills and one error.

The Bears never trailed in the second set, and turned a 10-9 score into a 15-9 lead with a 5-0 run that included two kills and a block from Cheffey. The teams sided out to the final score with the exception of MSU holding serve twice, and the Bears hit .536 in the period with 16 kills and one error on 28 swings, paced by Wright’s 6-for-6 effort.

The Bears’ five attack errors tied for the fewest on record at Missouri State, joining 2009 matches against Bradley and Mississippi State and a 1990 contest versus Eastern Illinois for that distinction. The Bears held the Sycamores to .124 hitting with leads of 46-33 in kills, 50-47 in digs and 5-1 in blocks.

Missouri State stayed perfect in the Missouri Valley Conference after securing a 3-0 (25-14, 25-17, 25-16) sweep over the Indiana State volleyball team Saturday night inside the ISU Arena.

It was a back-and-forth affair early on in set one before the Bears used a 7-1 run midway through to take control. Missouri State would go on for the 25-14 win after hitting .333 in the frame and holding ISU to .109 attacking.

Missouri State was able to keep the momentum going in the third set with a steady attack while Indiana State was held to a match-low .061 attack with just eight kills on 33 attempts. The Bears jumped out to a 7-1 lead and never looked back.

Next Up
Indiana State hits the road next weekend with trips to Drake and Northern Iowa.