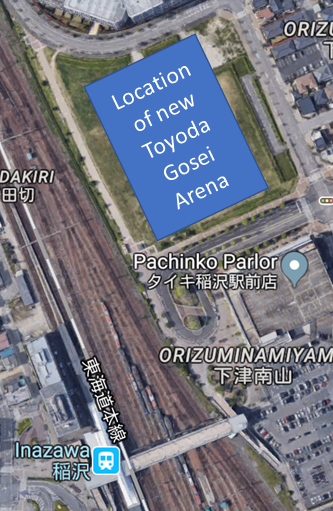 The Japanese automotive supplier Toyoda Gosei, who has men’s volleyball (Trefuerza), men’s handball and men’s basketball teams, has decided that they will build an arena in the city of Inazawa, Aichi prefecture. The arena will host the home games of Toyoda Gosei’s three teams. Inazawa is northwest of Nagoya and Toyoda Gosei has a plant in the southwest part of the city.

According to the Digital Kensetsu News on April 18th, Toyota Gosei has reached an agreement to purchase a property east of JR Inazawa station. The price of the property is said to be 2 billion yen (US$18.85 million). The property itself is 161,500 sq. ft, and the arena when complete will occupy 59,200 sq. feet of the property. The property will have purchasing agreement in place in May and a formal contract signed in June. Construction on the 3,000 seat arena will begin in 2019 and is expected to be complete by March 2020, with an official opening estimated to be in May 2020.

With the new V.LEAGUE system to start in the fall of 2018, teams are going to play more matches at an arena in the team’s hometown. However, Japanese teams usually rent their arenas from the cities or municipalities that the matches are played in. With many of the teams owned by businesses, the teams do have a practice facility that is owned by the business. With the announcement of Toyoda Gosei building their own arena, this may give them an advantage over other teams in the men’s V.LEAGUE because they will be able to control their own revenue from within the arena. It will be interesting to see the venue when it is complete.