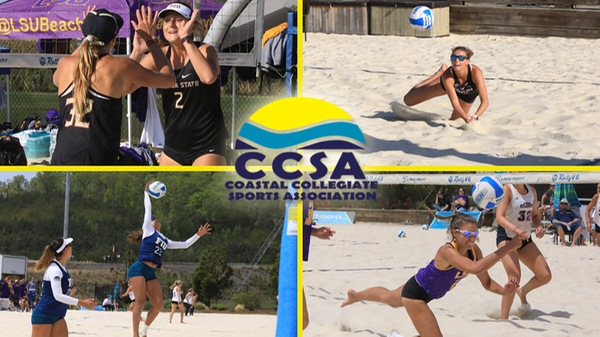 The top four seeds in the championship advanced to Sunday's semifinal round as No. 1 Florida State and No. 2 South Carolina each topped their groups and LSU and FIU earned runner-up spots.  Current Photo via CCSA

LakePoint, Ga. – Saturday’s day two action of the 2018 Coastal Collegiate Sports Association (CCSA) Beach Volleyball Championship brought the conclusion of pool play. The top four seeds in the championship advanced to Sunday’s semifinal round as No. 1 Florida State and No. 2 South Carolina each topped their groups.

Pool A Recap:
No. 1 Florida State continued its dominance in the sand at the Rally Volleyball courts as the Seminoles defeated LSU 4-1 in the morning and then Georgia State 5-0 in the afternoon to finish pool play with a 4-0 record. Katie Horton / Hailey Luke set the tone in morning match as they won 21-10, 21-12 at Court 2. On Court 4, it was Molly McBain / Brooke Kuhlman who also dominated their match winning 21-10, 21-11. The match clinching point came on court three where Macy Jerger and Sara Putt won in straight sets.  The afternoon session brought with it five straight-set victories for the Seminoles as they cruised past Georgia State. Tory Paranagua and Vanessa Freire bounced back from a loss to LSU earlier to win 21-16, 21-14 in their match. Francesca Goncalves and Eva Torruella picked up a win at Court 5 to help seal the deal.

No. 4 LSU needed a victory against FAU in the afternoon session to secure its spot in the semifinals, and the Sandy Tigers came through with a 4-1 victory. CCSA Pair of the Year, Claire Coppola and Kristen Nuss capped off a great pool play for them with a dominating 21-12, 21-10 victory. Riley Young and Maddie Ligon earned LSU’s second point on Court 5 with a 21-15, 21-12 victory, before Emmy Allen and Megan Davenport clinched the dual on Court 4. The duo won two tightly contested sets, 21-19, 22-20 to secure LSU’s spot in the semifinals.

FSU and Georgia State also posted victories on day two of Pool A action. FAU secured a 3-2 win against UNCW in their first match of the day. A three-set victory by CCSA Co-Freshman of the Year Erica Brok and Mackenzie Morris was the deciding point that lifted FAU past UNCW. Georgia State closed out the action with a 5-0 sweep in the final match of the day. Olivia Stasevich and Georgia Johnson won 15-11 in the third and final set to close out Pool A action.

Pool B Recap:
No. 2 South Carolina secured the top spot in the group with two hard-fought victories on Saturday. The Gamecocks got wins on Court 1, 2 and 4 to pick up a 3-2 victory against College of Charleston. Cadie Bates and Katie Smith won 21-14, 21-12 on Court 1, while Leah Perri and Macie Tendrich got the clinching point on Court 4 with a 21-13, 21-19 win. South Carolina then cemented its top spot in the group with another 3-2 win, this time against FIU. After Shannon Williams and Ali Denney picked up a straight-set win on Court 2, Carly Schnieder and Julia Mannisto followed suit on Court 3. Once again Perri and Tendrich were called upon to secure the dual, and they delivered with a 15-5 third set win.

No. 3 FIU bounced back from the tough loss to South Carolina and swept UAB in the final match of Pool B to book a place in the semifinals. Federica Frasca and Margherita Bianchin continued their strong play with victories in both duals. Lina Bernier and Erika Zembyla won 21-13, 21-15 on Court 2 to secure the second point, while Natalia Giron and Teffy Bethancourt won running away on Court 5, 21-6, 21-12 to help secure the dual match victory. The Panthers will now face No. 1 Florida State in the semifinals, a rematch of last year’s final.

Tulane closed out its pool play action with two victories to finish the tournament with a 2-2 record. The Green Wave defeated UAB and College of Charleston by the same score of 4-1. Maddy Mertz and Kaylie McHugh secured two victories to add to their great season. Ashley Delgado and Addison Hermstad went 2-0 on the day at Court 5, with Court 2 (Tarin Mergener and Lan Nguyen) and Court 3 (Lauren Orlich and Anna Chin) also swept both of their matches.

The CCSA Beach Volleyball Championship Semifinals will begin at 9 AM ET on Sunday, April 22nd as No. 1 Florida State takes on No. 3 FIU. In the second semifinal, No. 2 South Carolina will play No. 4 LSU with first serve scheduled for 10:30 AM ET. The final will begin at 1 PM ET from the Rally Volleyball complex at LakePoint Sporting Community. This year marks the first time that all three Sunday matches will be broadcasted live as Eleven Sports USA became a league partner this year.