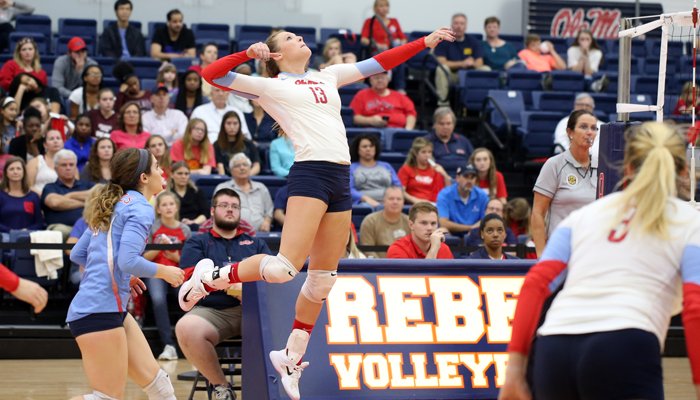 Emily Stroup knocked down 19 kills to lead Ole Miss to the NIVC Finals with a sweep of West Virginia. Archive Photo via Ole Miss Athletics/Volleyball

As the lone non-Big 12 school in the NIVC Semifinals, Ole Miss continued to crash the conference’s party as they took out the West Virginia Mountaineers in straight sets to reach the NIVC Championship match. Their opponent will be another Big 12 foe, as they will take on Texas Tech.

In this one, Ole Miss was the stronger serving team and offense. They out-hit West Virginia .210 to .157 and had four more aces (4-0) with one less serve error as well. Beyond that, the Mountaineers sported more digs (46-42) and had a few more blocks.

Individually for the Rebels, Emily Stroup dominated the match with 19 kills (.286) on offense while Kate Gibson tacked on 10 kills and contributed to the serving effort with two aces. It was a team-effort defensively too, as that serve contributed to their success in the match.

For West Virginia, Payton Caffrey notched 13 kills (.300) and nine digs with Mia Swanegan recording 11 kills (.318) and eight blocks. While Swanegan’s collegiate career comes to a close, Caffrey will be back with a host of faces as this long postseason run should serve a relatively young West Virginia team well next season.