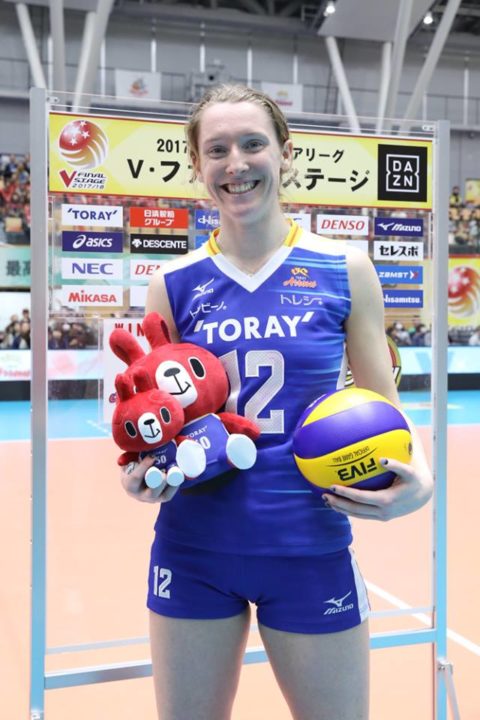 The Hisamitsu Springs entered Saturday’s matches in the Japanese Women’s V.League Final 6 in first place. Their head coach Shingo Sakai decided to give some of the three starting members the day off, Rika Nomoto and Risa Shinnabe against the NEC Red Rockets. Shinnabe sprained her ankle on the last point of the match against Toray, so that made sense. However Nomoto appeared to be a healthy scratch from the lineup. Instead, collegian (still in college at University of Tsukuba) Arisa Inoue and Yuka Imamura would get the starts. It started well for them by winning the first set, but NEC responded in the second set to tie the match at 1-1. It looked like NEC would take the third set after taking a 7-1 lead and Hisamitsu having already used their timeouts. Instead the Springs found their footing and won comfortably 25-20. The fourth set was tight with Hisamitsu making late spurt after to win the set and match 3-1. The Springs are still perfect on the season at 24-0. The win clinched a berth in the Final 3 (semifinals) for Hisamitsu and they are only a combination of 5 points (Hisamitsu gained and JT lost) away from clinching a berth in the Final. NEC are now in last place in the Final 6, but they have 3 matches remaining. Inoue for the Springs led all scorers with 22 points (20k, 1b, 1a), but she did not get Woman of the Match, which was her teammate Imamura with 19 (18k, 1a). American Foluke Akinradewo did not have to be as incredible as she was last weekend, but still had 13 (11 k, 2b) in an effective performance. Sarina Koga 19 (17k, 2a) and Mizuki Yanagita 18 (16k, 1b, 1a) carried the load for the Red Rockets in the loss.

JT Marvelous met Denso Airybees as the Marvelous tried to keep pace with Hisamitsu and the Airybees looked to jump into third place with a win. For JT Brankica Mihajlovic was just dominant with 23 kills on .500 hitting percentage (3 errors, 40 attempts), plus two blocks and an ace for a total of 26 points in a three set sweep. The rest of the Marvelous players had a hitting percentage of .418 (34 kills, 8 errors, 67 attempts). The Airybees only had Yurie Nabeya hit double figures with 12, but just in spiking they were 21 kills behind in a three set match and you can’t win when you are 7 kills a set behind. JT win the win stays right on the Springs heels, 1 point behind with two matches left. Denso stays in fourth behind Toyota Auto Body, but they have one more match to play than does Toyota.

Toyota Auto Body Queenseis faced Toray Arrows as both teams looked for their first win in the Final 6. Toyota took a tight first set, but Toray jumped out to a five point lead in the second and coasted to tie the match at 1-1. Toray fought hard to win another tight set in the third to take a 2-1 lead. After taking a time-out at 11-9 in the fourth set, the Arrows made a quick 6-3 run to put the match out of reach to win 3-1. Kadie Rolfzen was unstoppable for the Arrows with 28 kills in four sets of play. Plus throw in three blocks and two aces to lead all scorers with 33 in the win. Her Toray teammate Mari Horikawa was a wall with 6 blocks, and then 16 kills for 22 points. Neriman Ozsoy tried to keep pace for the Queenseis with 28 (25k, 2b, 1a) in the loss. Erika Araki as a middle continued to contribute with four kills and three aces, but her spiking was a little off with only .250 hitting percentage (5 k, 1e, 16 attempts) in the loss. Toray leaps into fifth place with 3 points, only two points behind Toyota for third and one point behind JT for fourth.