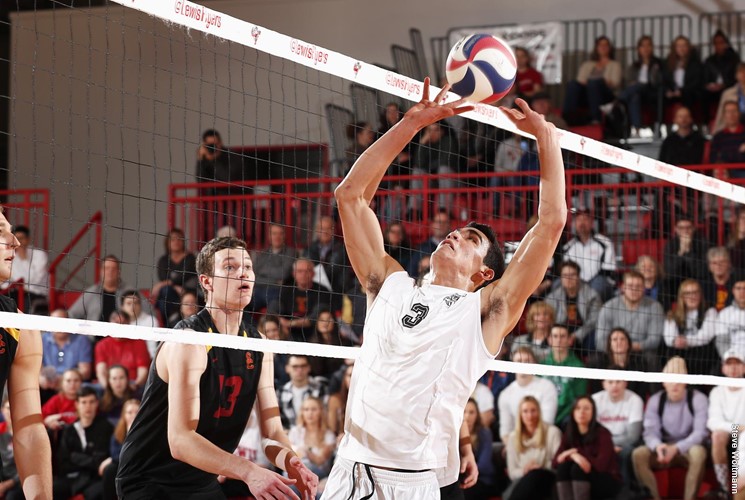 Five of the six Lewis hitters with a kill to their credit hit at a .308 or better clip, including four at .500 better, in a road sweep of Fort Wayne on Saturday.  Current Photo via Lewis Athletics

FORT WAYNE, Ind. – Five of the six Lewis hitters with a kill to their credit hit at a .308 or better clip, including four at .500 better, in a road sweep of Fort Wayne on Saturday.

The individual efforts lifted the Flyers to a combined team hitting percentage of .429, with just eight hitting errors in the match. Lewis bested the Mastodons 41-34 in kills, 2-1 in aces and 5.5 to 3 in blocks, while holding Fort Wayne to a .165 hitting effort.

Redshirt sophomore outside Ryan Coenen led the Lewis offense with 12 kills, marking his sixth double-digit effort of the season, while sophomore outside Kyle Bugee and redshirt freshman middle Tyler Mitchem added nine and eight respectively. Bugee hit at a .615 clip with just one error, while posting a team-high nine digs and two aces. Mitchem notched a .500 effort and put up a team-leading four blocks.

Set 1 was even in the early stages with the teams tying nine times, the last at 11-all. The Flyers went up 13-11 on back-to-back Bugee kills, but Fort Wayne stayed close until Lewis scored six straight to vault ahead 21-14. A kill and a block by Mitchem and an ace by Bugee buoyed the rally. A Tomas Gago kill slowed Lewis momentarily, but the Flyers notched four of the final six points as Coenen, Mitchem and TJ Murray turned in kills.

Lewis grabbed an early three point lead at 6-3 after two kills each by Mitch Perinar and Mitchem and held the Mastodons at arms length from there in Set 2. A block and an ace by Bugee upped the margin to four at 16-12 but a pair of Stone putaways had Fort Wayne back within two. Up just two at 19-17, the Flyers had help from three miscues as well as kills by Mitchem, Bugee and Perinar to close out the 25-19 win.

It was a two-point game midway through Set 3, when Lewis pulled away with an 8-1 run to turn a slim 15-13 margin into a dominating 23-14 advantage. Five Fort Wayne miscues and two Coenen kills guided the effort. A Murray kill gave the Flyers a match-point try at 24-15, but a Vargas putaway held things off momentarily. Coenen issued the final putaway to clinch the sweep.

Fort Wayne held close with Lewis in the first set, within one at the 15-14 mark. The Flyers went on a 10-3 run to end the set, which included six straight. Colton Stone had six of his nine kills in the first set.

Lewis led from wire to wire in the final set, holding the ‘Dons to .030 in the final frame. Pelegrin Vargas had five kills in the last set.

The Mastodons drop to 9-4, 1-3 MIVA, while Lewis improves to 9-4, 3-1 MIVA. The Mastodons have their next two matches on the road, as they travel to Lindenwood and Quincy on Friday and Saturday (Feb. 23-24).